On Saturday, June 4, Venezuelan Minister of Petroleum, Tareck El Aissami denounced an attempted sabotage against the electrical system of the El Palito Refinery, located in the municipality of Puerto Cabello, Carabobo state. The sabotage attempt was foiled, the minister informed.

El Aissami revealed that the authors of the plan manipulated the protection systems so that, in the case of any contingency, the protection mechanisms would not work, and as a result an explosion with incalculable consequences in the main plant would happen, not only affecting the electrical service but also putting in risk the lives of the workers.

In El Aissami’s opinion, the action was planned from Colombia, with the consent and complicity of the government of the President of Colombia, Iván Duque.

Accompanied by the manager of El Palito refining complex, Ramón Curapiaca, and other directors of operations and integral security of PDVSA, El Aissami stated that, after the sabotage attempt, security has been redoubled at the refinery. He added that the entire electrical system and other operational systems are being checked by experts, in order to “guarantee operational stability to continue producing fuel for our people.”

Venezuela has neutralized an act of sabotage which sought to cause catastrophic damage to PDVSA's El Palito refinery in the state of Carabobo, reports oil minister @TareckPSUV. pic.twitter.com/3lf5CEBmXT

The minister urged workers in all productive areas of the oil industry to be on “maximum alert,” in order to be able to firmly confront the violent intentions of the outgoing government of Colombia, adding that there is “an obsession against our industry with the intention of harming us.”

RELATED CONTENT: US Refuses to Buy Oil from Venezuela (+Chevron)

El Aissami stressed that the strong response to this kind of sabotage will always be “in the first place, the union of the working class, the deep and patriotic conscience of all; and above all, the highest level of mobilization of our workers around the facilities, to be able to detect any suspicious act or any outsider at the facilities early, and to proceed to report it.”

The minister assured that together with the Bolivarian National Armed Force (FANB), police forces, the people and the oil working class, the government of Venezuela will respond with dignity and firmness to such acts of sabotage against the refineries. “They will not be able to stop the course of progress and victory of the Bolivarian government, and Venezuelan fuel will continue to be produced in our refineries and distributed throughout the national territory. We will win!!!” he concluded. 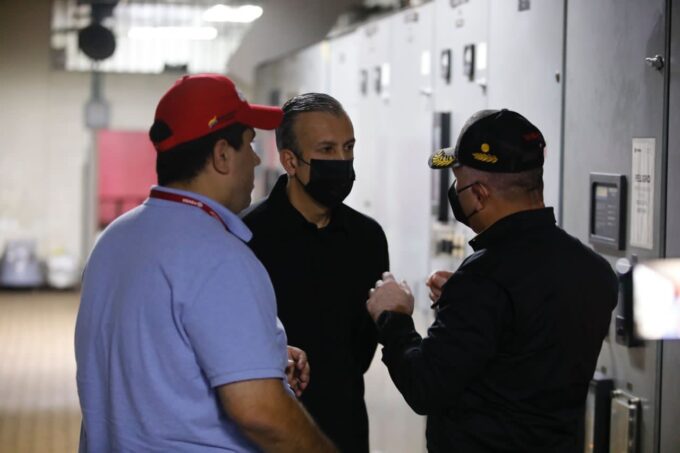 Detection and repairing of flaws
The head of the PDVSA Technical Investigations team, José Luis Rodríguez, reported that after carrying out an exhaustive inspection and a detailed evaluation of the El Palito Refinery’s electrical system, an induced failure in the transmission line 115 was detected, affecting the protection equipment and breaking the conductors of the main line.

Rodríguez added that experts also carried out a meticulous evaluation in each of the substations, and detected other signs of sabotage in the electrical systems within each of the structures of the El Palito Refinery.