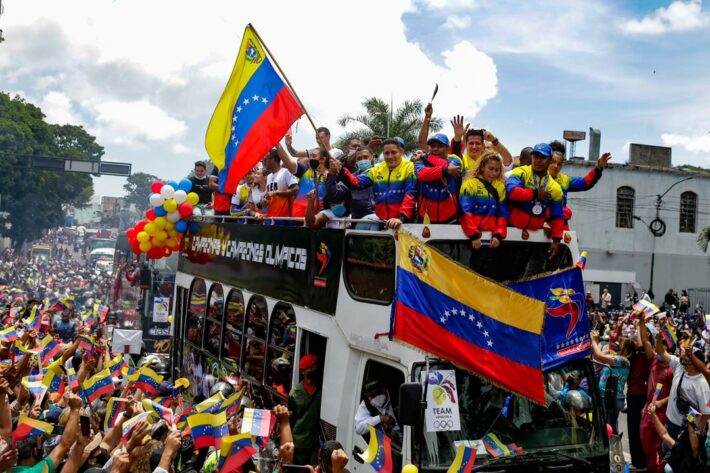 Caracas, August 10, 2021 (OrinocoTribune.com)—After the nation’s best historical Olympic performance in the Tokyo 2020 games, the delegation with several athletes, members of the golden generation, flew back to Venezuela and received a warm embrace from fellow Venezuelans and government authorities upon their return. They arrived aboard an Airbus 340 of the Venezuelan Consortium of Aeronautical Industries and Air Services (Conviasa) specially deployed by Venezuelan authorities to facilitate the return of the athletes.

Many international athletes remain stuck in Japan due to European COVID-19 restrictions that delay their return home. Some news agencies reported that Colombian athletes complained about the lack of response by Colombian authorities. Meanwhile in Venezuela, the Conviasa plane with our athletes was escorted by Sukhoi Su-30MK2 fighter jets, sent by the Venezuelan army as a sign of recognition for their exceptional performance.

Young athletes from various corners of the country returned this Tuesday morning to the Maiquetía international airport, alongside the sports commission made up of 66 people and chaired by Venezuela’s Minister for Sports, Mervin Maldonado, aboard Conviasa flight VCV874. They were received by an emotional group of Venezuelans waving flags, smiling and cheering to commemorate their performance in the prestigious global competition.

President Maduro received the athletes in Miraflores palace, and earlier posted a message on his Twitter account: “Welcome to the homeland kids. You arrive triumphant and happy for achieving the best Olympic performance in the history of the sport in Venezuela. Victorious golden generation—a warm embrace to you!”

Welcome!
43 athletes who represented Venezuela in these Olympic Games brought to the country:

This performance positioned the country 46th in the overall medal table, in the eighth place in the hemisphere, and in fourth place in Spanish-speaking Latin American. They are all part of that golden generation baptized as such by Commander Chávez.

The Minister for Youth and Sports, Mervin Maldonado, highlighted that “the joint work, the cooperation of athletes, coaches, clubs, federations, the National Institute of Sports and the ministry,” as well as the strategy of the Venezuelan State in assuming sport “as a priority policy, and with an athletic plan,” allowed the country to achieve its best performance ever at the Tokyo 2020 Olympic Games.

Maldonado added that despite the US and European blockade, the athletes gave their best. “We are not intimidated by any difficulty, in the face of the pandemic, in the face of blockades, and we assume it as a challenge,” he said, while indicating that Venezuela has achieved a total of 21 Olympic medals throughout its history, and a third of these were obtained at the Rio 2016 and Tokyo 2020 Olympic Games alone.

With music and excitement, this golden generation arrived home to drums, dances, and hugs from their family, friends, government authorities, and most importantly, to a warm reception by the Venezuelan people who were inspired by their performance.

Fourth place for Latin America and the Caribbean
Orinoco Tribune’s team completed a small and simple exercise by adding up all the medals obtained by Latin American and Caribbean countries, and the result was amazing: a total of 74 medals, including 25 gold, 22 silver, and 27 bronze. Regional unity as envisioned by Simón Bolívar and Hugo Chávez would have positioned our Patria Grande in fourth place in the overall medal table for the Tokyo 2020 Olympics. 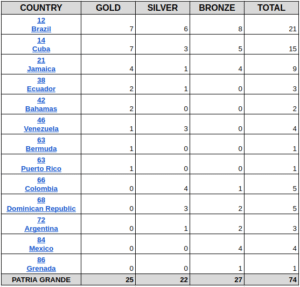 The founder and editor of Orinoco Tribune told us that “this was a good exercise to reveal with more clarity the real potential that our region has, despite the petty chauvinism embedded in the Olympic project that sometimes prevents us from seeing the big picture. We can imagine the strength that might come out of the real unification of our countries in a fortified Patria Grande project, defeating the divisions promoted by neo-colonial powers whose only objective is to maintain their exploitation of our territory.”

Featured image: Venezuelan Olympic athletes were received as heroes for achieving the best national performance in any Olympic Games in history.