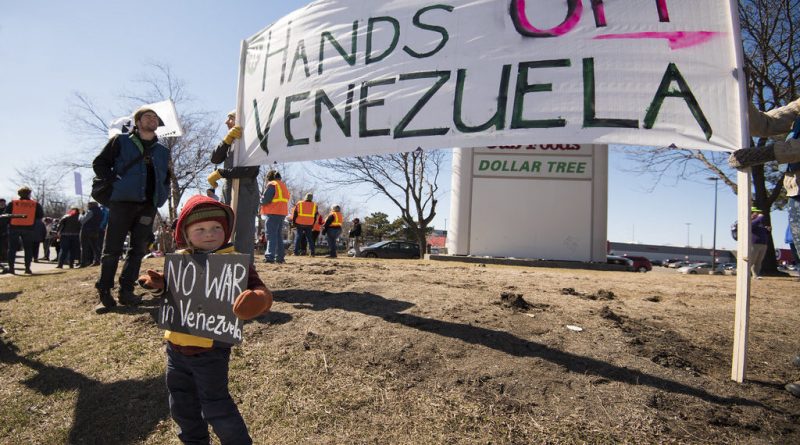 An organization in the United States has scheduled a 10-day trip to Venezuela in late August that could help people find answers to important questions: Are there shortages of food? What is responsible for such shortages? What is the role of U.S. sanctions? How are the Venezuelans responding to the challenge?

These are essential questions for political activists in this country, especially for those who want to remove U.S. imperialism’s foot from the backs of the people of the world, including Venezuela.

Since January, Washington has stepped up its aggressive campaign against the legitimate Venezuelan government led by President Nicolás Maduro. The U.S. propped up an ineffectual puppet, Juan Guaidó, who declared himself interim president. But the Trump gang’s repeated attempts to carry out a coup and break up the Bolivarian Armed Forces have failed miserably, due to the mass resistance of the Venezuelan people and the loyalty of the armed forces.

Washington appears to have moved toward long-term subversion. The U.S. is disrupting Venezuela’s economy through a virtual blockade and the actual theft of Venezuela’s wealth, which is held in imperialist banks. A propaganda offensive has accompanied economic subversion. Media lies portray life in Venezuela as miserable and chaotic while blaming the Caracas government for the difficulties.

On July 6, for example, an article in the New York Times detailed the problems that fuel shortages have brought to an agricultural region of Venezuela. While the article does mention that U.S. sanctions caused the fuel shortages, it nevertheless assaults the Maduro government’s policies, blaming them for the crisis.

The media campaign makes it doubly important that the Alberto Lovera Bolivarian Circle of New York and its spokesperson William Camacaro are organizing the August trip. Camacaro is well-known to Workers World readers as a long-term and consistent internationalist. The Bolivarian Circle pulled together a trip from April 26 to May 5 this year, which happened to coincide with the April 30 coup attempt. U.S. activists on the trip were able to send back eyewitness accounts of how the Venezuelan people were coping with the emergency, rebutting imperialist lies.

The trip this August will provide an opportunity to learn what is happening in Venezuela and to bring that message back to the people of the U.S. Here are excerpts from the Bolivarian Circle’s description of the coming trip:

“What’s going on right now in Venezuela? Come see for yourself how Venezuelans are coping with U.S. economic sanctions designed to cause a social implosion. Sensationalized reports of Venezuelans eating zoo animals and rotten garbage present a distorted picture of what is happening in Venezuela. The media also omit serious analysis of the role of the food distribution program known as CLAPs run through a government-community partnership reaching millions of Venezuelans.

“There is no doubt, however, as indicated in a recent report by the Center for Economic Policy Research [April 25], that the U.S.-imposed sanctions are indeed causing collective hardship and even death.

“Join us for a special delegation (August 19-28, 2019) dedicated to studying the actual conditions on the ground and the struggle for food security and food sovereignty in Venezuela, at a time when the Donald Trump’s administration has initiated a new series of sanctions against the food programs that the Venezuelan state has created.

“Come bear witness to the effects of the economic warfare and the sanctions against the Venezuelan people imposed by Donald Trump’s administration as well as the inspiring resistance to these, as Venezuelans push for food sovereignty in response to crisis. Come see the real ‘threat’ posed by Venezuela — as living proof that another world is indeed possible. As the Venezuelan people assert, ‘Venezuela is not a threat — we are hope!’”

The trip will start and end in Caracas, with visits to the states of Miranda and Aragua. For more information, email cbalbertolovera@gmail.com or estebanbartlett@gmail.com, or call 502-415-1080.