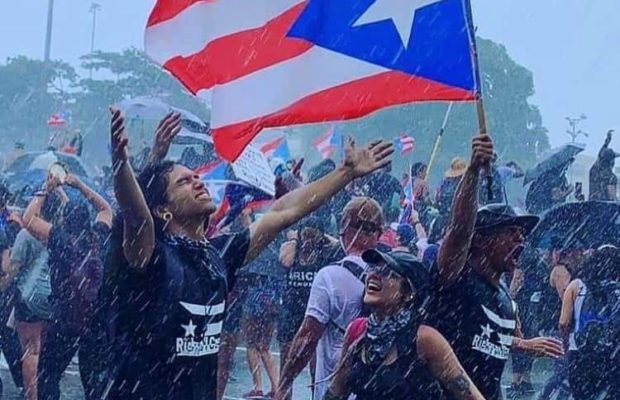 It is the first time that it occurs in Puerto Rico and marks a line to apply throughout Latin America.

Historic exercise of democracy outside the polls.

Ricardo Rosselló Nevares resigned his duties as governor on Wednesday after facing weeks of mass protests against him, becoming the first governor of Puerto Rico to leave his post.

“I finish my mandate and the most I want is peace and transformation for our people … Thank you for the privilege of allowing me to serve you,” said Rosselló Nevares in the middle of a message posted on the Facebook page of La Fortaleza in which he also summed up some “achievements” of his administration.

The resignation of Rosselló Nevares will be effective on August 2 at 5:00 p.m., according to the message. The secretary of the Department of Justice, Wanda Vázquez Garced, will be his successor by constitutional order, as there is no secretary of state.

The 40-year-old scientist and father of a boy and a girl spent two years and six months in the governorate. His father is former Governor Pedro Rosselló González, making him the first son of a governor elected to office. He is also the twelfth Governor under the constitutional order.

With his resignation, he hopes to avoid a residency process for which the independence legislator, Denis Márquez, had already submitted a resolution in the House of Representatives. Instead of attending to it, President Cameral, Carlos “Johnny” Méndez devised the designation of a panel of three jurists to analyze the [Telegram] chat to identify crimes, which they did today identifying at least five serious crimes that the governor could have committed. After waiting for a period of 5 pm that the Governor let pass without communicating his decision, Méndez called the Chamber for Thursday to begin the residency process.

The disseminated pages of the chat reflect that the Governor and his close group of advisers conducted public policy development through the platform as well as that they shared confidential government information with lobbyist Elías Sánchez Sifonte, plotted to attack political opponents and insulted different types of people, including obese people, members of the LGBTT community and personalities from the entertainment and political world.

The events that hit the Rosselló Nevares Administration were unleashed on July 9 when NotiCel began to reveal the content of the chat, on July 10 the federal authorities arrested two former officials and others close to the administration, on July 11 the independent journalist Sandra Rodríguez Cotto disclosed other excerpts from the chat in which the participants make homophobic and misogynistic comments, and on July 13, the Investigative Journalism Center published about 889 pages of the chat.

As a result, requests for Rosselló Nevares’ resignation and rejection by important leaders of the New Progressive Party (PNP) that culminated in what is probably the busiest political demonstration in the modern history of the Island began to multiply. held on Wednesday, July 17, by call from civic sectors and artists such as Bad Bunny, Resident and Ricky Martin. In the leadership of the activity there was no prominent participation of other political parties and even figures such as King Charlie, whose mustering power was not noticed by most of the country, became relevant.

The (initial) reaction of La Fortaleza in the middle of the demonstrations was that one of the constitutional reasons for a Governor to leave office is not “that there is a demonstration of a particular number”. Even so, citizen and artistic activists continued demonstrating worldwide, in the delivery of the Youth Awards, in the National Superior Basketball and through daily protests both in La Fortaleza and in other municipalities.

Another milestone happened on July 22 when the largest protest in the history of Puerto Rico was recorded with over 500,000 people occupying the Las Americas Expressway and surrounding streets. The domino effect continued when Rosselló Nevares had a disastrous interview on Fox News, his father disenrolled from the PNP and resigned from the Equality Commission, the member of that commission, Zoraida Fonalledas, requested the resignation of the official, Empresas Fonalledas (operator of Plaza la Américas) joined his call, and the Secretary of the Interior, Ricardo Llerandi, and the interim director of the Administration of Federal Affairs of Puerto Rico in Washington, George Laws, resigned from their posts. Likewise, the mayors of Arecibo and Guaynabo asked for the resignation of the President.

Meanwhile, the Department of Justice submitted an affidavit on Monday in which an agent of the Bureau of Special Investigations claimed to have indications that serious violations of the Government Ethics Law arise from the Telegram chat. But the Governor had already said twice that he had erased it, raising the possibility that evidence destruction was committed.

Rosselló Nevares reached the maximum office of the country after prevailing in the 2016 elections with 660,510 votes, or 41.80% of the participants in the elections, which were also historical because for the first time two independent candidates for the governorship participated, which, between both, they captured 16.8% of the votes. The closest rival to Rosselló Nevares was the candidate of the Popular Democratic Party (PPD), David Bernier, with 38.87% of the vote.

Since 2016, Puerto Rico has felt the impact of a vertiginous chain of historical events. In May 2016, a non-payment of the debt of the Government of Puerto Rico was declared, in November 2016 the election with independent candidates arose, in May 2017 the bankruptcy of the government was declared under the new structures of the federal law PROMESA, in September 2017 it received the scourge of Hurricane Maria, the most powerful in almost 100 years, and now the first resignation of an elected governor.

Rosselló Nevares swore to his position on January 2, 2017 in an act in which he said he would be “the last governor of the colony”.

“Thanks also to my ballot companion, Jenniffer González Colón, who will undoubtedly be the first woman to be a resident commissioner and the last one, because we are going to bring statehood,” said Rosselló Nevares before being elected.

Precisely, it was González Colón among the first to withdraw his support for Rosselló Nevares when his administration was marred by government corruption and the leak of Telegramgate.

But the resignation of the secretary of the Department of the Treasury (DH) Teresita Fuentes on January 27 was one of the twists that gave way to the political hurricane that culminated today with the resignation of Rosselló Nevares. NotiCel published in early 2019 that Fuentes left office in the DH for “frustrations” with the public policy of the New Progressive Party (PNP). In her resignation letter, Fuentes said: “I understand that the position of Secretary of the Treasury must be held by a servant in keeping with his ideals of public policy”.

This exit led Raúl Maldonado Gautier to the DH chair, who had left that agency to become secretary of the Interior.

Once in control of the Treasury, NotiCel revealed that Maldonado Gautier’s son, Raúl Maldonado Nieves, was contracted at least by seven government agencies, a municipality and the Senate through five companies.

NotiCel also found that Maldonado Gautier himself signed several of the contracts with companies that in turn his son outsourced, including Virtus Consulting.

Subsequently, inquiries were reported about Maldonado Gautier for this fact and months later, the now former official used the radio station WKAQ to defend himself and claim that there was an “institutional mafia” in the DH.

The complaint of the alleged “mafia” caused Rosselló Nevares to hold a press conference in which he removed Maldonado Gautier from his posts.

That dismissal fueled Maldonado Nieves, who used his Facebook account to issue several messages in which he branded the Governor as “corrupt” and also said he paralyzed the delivery of supplies after the passage of Hurricane Maria in 2017 to get political benefit. “You don’t believe me? Polygraph,” he said in several instances.