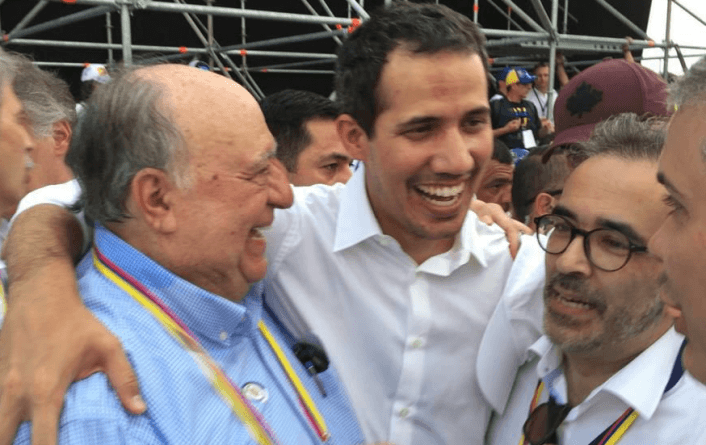 After a group of military deserters from Venezuela denounced the abandonment by the Colombian authorities, the right wing Venezuelan politicians and the Agency for Refugees of the United Nations (UNHCR) , the supposed “ambassador” appointed by the deputy Juan Guaidó in Colombia, Humberto Calderón Berti, spoke about it.

Through a statement, Calderón Berti caught up with the statements and claims of the troops and said their problems will be addressed. He even stressed that these “have been given temporary assistance consisting of accommodations and food.”

“This Monday, March 18, a multidisciplinary meeting will be held with national and local authorities (from Colombia), as well as with the Embassy of Venezuela (that means him), to advance in the search for a definitive solution for the needs of these young soldiers and their families”, details the letter.

The Venezuelan defector in question, let’s remember, told the media of the neighboring country that they were given a maximum period of four days to exit from the facility they have been using in the border area, specifically in Cúcuta. They also stressed that in exchange they were offered 350 thousand Colombian pesos (US$ 112), a mattress and bed-sheets for each one.

“We are adrift, we do not have the support of anyone. We want Juan Guaidó to come face-to-face”, said the Venezuelan Army’s second sergeant Luis González Hernández, who served as spokesperson for the group.

Here is the statement (try to fish from this what is truth and what is a lie):

The Embassy of Venezuela in Colombia, together with the effective and solidar of the Colombian Foreign Ministry authorities, the Ministry of Defense, Migration and the National Unit for Disaster Risk Management, UNGRD, have been working together to address the more than 1000 Venezuelan military personnel, who are in Colombian territory, especially in the city of Cúcuta.

These compatriots have arrived in the Colombian territory as a result of the deep crisis that exists in Venezuela which affects the entire population, among them the members of our FAN.

These Venezuelan soldiers have been given temporary assistance consisting of accommodation and food.

The Embassy of Venezuela, with the cooperation of the Colombian authorities, is working on the search for a definitive solution to this problem that will allow to offer compatriots training programs under the framework of Binational Cooperation Agreements between Venezuela and Colombia. The programs will be developed through SENA, the Colombian Institution responsible for conducting training and training plans for civilian personnel.

On Monday, March 18, a multidisciplinary meeting will be held with national and local authorities, as well as the Embassy of Venezuela, to advance in the search for a definitive solution to the needs of these young soldiers and their families.