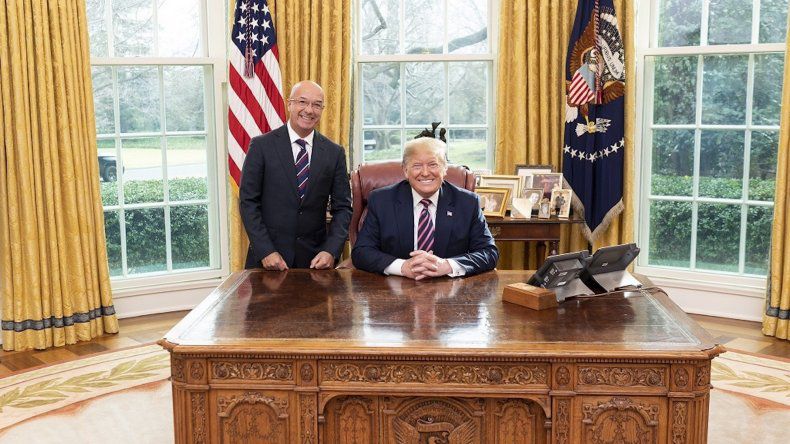 The fugitive from Venezuelan justice, Iván Simonovis, presented his “resignation” as Commissioner of Security and Intelligence, a fictitious position to which Simonovis was appointed by former deputy Guaidó after he proclaimed himself interim president of Venezuela.

Simonovis, who from the United States has participated in plans to overthrow Venezuela’s legitimate government, did not provide a reason why he is leaving this position—one that lacked any legal recognition in any case.

It should be noted that his resignation arrives within the framework of Guaidó’s newest announcement that he wishes to enter into a qualified “salvation agreement” with the Venezuelan government, after insisting time and again against the possibility of dialogue.

In his resignation letter, Simonovis made his continuing fealty to the United States abundantly clear: “It is imperative for me to point out my gratitude to Commissioner Leopoldo López and ‘Ambassador’ Carlos Vecchio for their support before and during my tenure, to the Government of the United States for receiving me in this nation, for their clear willingness to collaborate in our objectives, and for having summoned me as a special guest to the 2020 State of the Union Address.”

Who is he and what did he do?
Simonovis began his police career in 1981 as a detective. That same year, he created the BAE group (Brigade of Special Actions). In his letter he stated that 40 years ago he received his badge from the Judicial Technical Police (PTJ), currently CICPC. During the so-called mega march organized by the opposition on April 11, 2002, Simonovis was one of the police authorities who led the massacre on the Llaguno Bridge.

According to Guaidó’s former head of security, the US continues to direct actions aimed at creating chaos in Venezuela through “a hybrid war whose objective is to make the country dysfunctional until everything collapses.”

Simonovis is currently a fugitive on the run from Venezuela’s justice system. In 2009 Judge Maryori Calderón sentenced him to 30 years in prison for his role in the massacre at Llaguno Bridge. Simonovis was given the longest sentence of 11 who were indicted for organizing the killings—mostly with precise headshots—following the opposition march on Miraflores Palace in 2002, during the brief coup that removed President Chávez from power for less than 48 hours.

RELATED CONTENT: President Maduro: Former Deputy Guaidó Wants to Talk Now Because they Gave him the Order from the North

On May 10, 2014, as a result of dialogues between the opposition and the Venezuelan government, he was granted the benefit of house arrest due to the alleged deterioration of his health. In 2019, following his self-proclamation as president of Venezuela, the imposter Juan Guaidó announced his decision to grant pardon to Simonovis. A few days later, Guaidó himself celebrated the escape of the criminal from house arrest.

A few days ago Simonovis declared that the events that took place in Cota 905 and in Apure state obey a plan to destabilize the region and lead Venezuela to collapse.