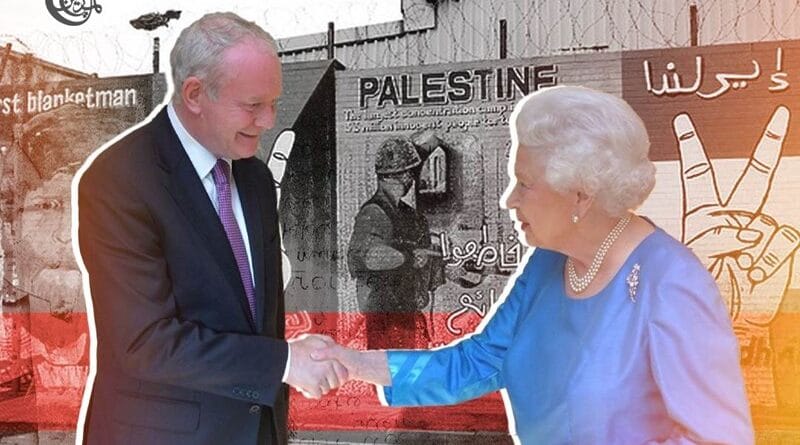 Sinn Fein went from being a revolutionary party supporting a legitimate armed struggle against Britain’s illegal imperialist military occupation of Ireland and aiming to build a socialist republic, to becoming a business-oriented party, focused on acquiring more seats in the parliament.

Where did it all go wrong?
Once the vanguard of Irish republicanism and claiming to be fighting for a free sovereign socialist 32 county Irish republic SF is now a parody of its previous incarnation.

From a revolutionary party supporting a legitimate armed struggle against Britain’s illegal immoral imperialist military occupation of Ireland, it is now a washed-out shadow of its former self.

SF has a long and proud history in the service of anti-imperialism in Ireland and great sacrifices were made by many of its members, leaders, elected representatives, and party officials when it bore the brunt of state repression and a murder campaign fronted by their pseudo loyalist death squads.

As the vocal representatives of armed Irish republicans, they suffered assassination, imprisonment, torture, and death.

During the twin political strategy of “the Armalite and ballot box”, the men and women of SF, some of whom were involved in the armed struggle, paid a heavy price for being the public face of militant republicanism.

Dare I judge those men and women for their heroic leadership in dangerous times?

RELATED CONTENT: ‘Poot In the Boot In’: Edwin Poots’ Leadership of the Democratic Unionist Party—21 Days in 2021

Do I condemn their actions?
On the contrary, I voted for SF for over 30 years.

In 1998, I voted in favor of the Good Friday Agreement, voting for peace as opposed to endless conflict. I voted to end state repression, conveyer belt judicial injustice, long prison sentences, and the dirty war inflicted on catholic civilians by the loyalist death squads, used as a proxy militia by Britain’s political establishment, its military and police infrastructure, and the dregs of military intelligence and special branch who used them as their counter-revolutionary assassins.

That was then, and this is now.

Did I leave SF or did SF leave me?
The once-proud promise of a socialist republic has, like snow on a ditch on a spring morning, evaporated in the light of power-sharing through the devolved regional assembly at Stormont, convening in the Northern Ireland Parliamentary building.

The slogan of ‘Smash Stormont‘ has been replaced with make SF the ‘biggest party in the Assembly.’

The graffiti on the wall that said ‘not an ounce not a bullet, no decommissioning of weapons’, has turned into supporting the police structures in N. Ireland, once damned as a sectarian anti-Catholic, anti-Irish militia and their new overlords in MI5.

British securocrats have primacy of control over policing here and run hundreds of human assets and paid informers, in the ranks of Republican and loyalist organizations.

Some of whom are on ceasefire, some of whom have ceased to be, some of whom continue to struggle against the British occupation in the North of Ireland, and some of whom, mainly the loyalist proscribed paramilitary groups are now little more than criminal gangs selling drugs and extorting money.

While active militant republicans can be numbered in their hundreds, loyalist paramilitaries many of whose leaders are claimed to be paid and protected state informers claim to have 12,500 current members at their disposal.

As SF moves further into the corridors of power in both jurisdictions on the island of Ireland and is poised to be leaders in government both north and south of Britain’s enforced partitioning border, we could well see reunification within the next decade or two.

But what will that reunification look like?
It could be a federal Ireland or a two Parliament Ireland with a continuation of the status quo. Two regionally elected bodies, one in Dublin and one in Belfast, or an enlarged Dáil Éireann to encompass representatives from all over the island.

One thing will remain constant throughout these future negotiations.

Their leaders might say, they never were?
They could rightly claim they fought the British establishment to free Ireland and it will be the people’s decision as to how the country will be governed.

At the recent annual party convention, Ard Fheis, Sinn Fein voted to endorse the emergency powers which allow the Irish state to hold non-jury trials, where Irish republicans can be sentenced up to life imprisonment, by a compliant judiciary; where state agents, state police and special branch, alongside state prosecutors and state judges will decide the fate of Irish men and women who in a real democracy should be judged by a group of their peers; where the onus is on the defendant to prove their innocence, not on the state to prove their guilt; where the burden of proof is lessened to ensure a conviction.

Internment by remand is a common feature where defendants can find themselves in jail for several years or on stringent bail conditions prior to some of the accused having their charges eventually dropped.

I mention this solely in the context of how a once-proud revolutionary political army has become part and parcel of the state apparatus they once fought; how in order to gain power, to become electable, and to hold positions in government, they have embraced the very system they set out to destroy.

As the revolutionary leaders retire into a sunset of paid pensions and second homes, the new generations of career politicians have come to the fore.

Squeaky clean, many articulate, embracing social democracy and neo-liberal politics, they embrace not revolutionary change but the status quo.

To those who fought and went to prison and died to free Ireland from British oppression and occupation but also to regain her national sovereignty, to re-own our land stolen by absentee landlords, to have full control over our finances and infrastructure, I will only repeat the words of Commandant James Connolly, leader of the Irish Citizens Army, who led the forces occupying the General Post Office in Dublin during the Easter 1916 rebellion, who was injured then executed by a British firing squad, strapped to chair in Kilmainham jail on May 12, 1916.

“If you remove the English Army tomorrow and hoist the green flag over Dublin Castle, unless you set about the organization of the Socialist Republic your efforts will be in vain. England will still rule you. She would rule you through her capitalists, through her landlords, through her financiers, through the whole array of commercial and individualist institutions she has planted in this country and watered with the tears of our mothers and the blood of our martyrs”.

The irony that SF is in now the government in waiting that James Connolly warned us about, is an irony many in SF and many who vote for SF would not recognize.

Sadly this is nothing new. We only need to look at South Africa to see how the revolutionary ANC embraced the neo-liberal status quo.

There were more homeless black people in South Africa, more unemployed black people, and more black families living in poverty under the ANC government than during the apartheid era.

The longed-for promise of the ‘Freedom Charter’ has failed to materialize.

White privilege is embedded in the state structures.

Black men and women are in government in South Africa but they do not hold the real power.

There will be no real change in Ireland.

Yes, it is the demographics that will allow the people in the north of Ireland to vote yes to national reconciliation and reunification.

But no, there will be no systemic change.

Ireland will be a haven for the corporate banker’s investor speculators and Realtors.

The landlords are still here. Corporate finance dictates fiscal policy the class enemies of the Irish people will remain in place.

What will SF do, I hear you ask?
They will do nothing. They are focused on being populist in order to win votes, gain seats and get their hands on the levers of power.

Then they will be as compliant and as complicit as all the other parties in government who preceded them, who promised so much yet delivered so little.

The sound bites will be different the honeymoon period extended but in the end, nothing will change.

I met ex-prisoners and republicans from time to time who asked me what was it all for.

They told me it wasn’t time to have SF in government to sell out the vision they struggled for?
A literal translation for Sinn Fein into English might be ‘ourselves alone’ a fitting description for a party that could only rely on its own people to advance the fight for freedom… ourselves alone, well I’d say SF are not alone,

Sinn Fein is not alone, like many others, it started out to destroy the establishment, then it claimed to reform it, and finally, it became part of it.

They are now the very people they promised to remove from office.

Could the Irish struggle for freedom and independence have ended any other way?
I think yes it could. But that as they say, is another story for another day.

SF was established in Ireland by Arthur Griffith on November 28, 1905.

Featured image:  The slogan of ‘Smash Stormont’ has been replaced with make SF the ‘biggest party in the Assembly’