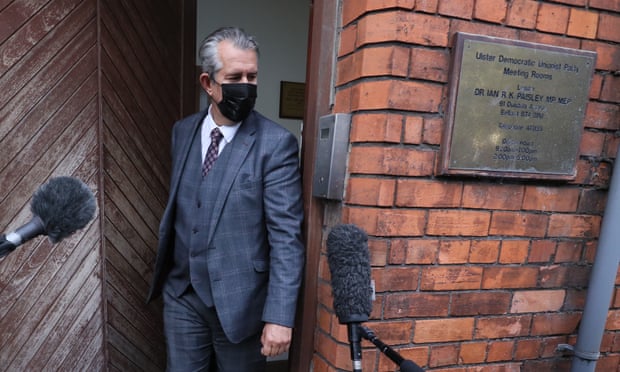 The Democratic Unionist Party (DUP) was founded by Dr. Ian Paisley. He was an enigmatic figure in northern Irish politics. His politics were a heady mixture of fundamentalist Christian values, unionist rhetoric, and the cult of personality.

A maverick who was from the start an outsider. A non-establishment figure whose appeal was a combination of biblical scripture and unionist intransigence. His rallying cry, some may even call his war cry was, ‘For God and Ulster’ and ‘No Surrender’.

A more accurate description of this ‘No Surrender’ mantra could be summed up as ‘No Compromise’.

‘For God and Ulster’ read a Protestant Ulster for the continuation of the pro-British colonial settler state of Northern Ireland.

Paisley undoubtedly represented a section of the fundamentalist Christian Protestant right, and its political voice became the Democratic Unionist Party. A party he began and a party he led for 35 years. Never elected, but he was the self-appointed supreme leader.

The man who ultimately came in from the cold to lead the Northern Ireland Assembly as First Minister. The man who cried ‘No Surrender’ to the IRA, then ‘No Surrender’ to Sinn Fein—the party seen by many as the political voice of the IRA. He eventually joined a power-sharing government with those very same people when Sinn Fein became the largest Nationalist party.

Towards the end of his political career, he was unceremoniously pushed to the side, having lost the confidence of the party he established.

His son Ian Paisley Junior was very bitter about what he saw as a betrayal of his father and his legacy.

The baton passed onto Peter Robinson, Ian Paisley’s protégé, then Arlene Foster, and most recently to Edwin Poots.

Robinson served for eight years as party leader and Foster for five years.

RELATED CONTENT: 100 Years and Not Out but Arlene Is!

Foster’s demise came about as a direct result of Britain’s exit from the European Union. Britain’s exit—known as Brexit—was endorsed by the Democratic Unionist Party which has elected Members in the British Parliament.

Sections of Unionism, loyalism, and the Democratic Unionist Party view this border as a dilution of their Britishness.

The party fed on a diet of ‘No Surrender’ of their British identity at any price has again circled the wagons.

When Foster was seen to be incapable of overturning this Northern Ireland Protocol she was viewed as being weak and selling Ulster out.

Ian Paisley Junior, a Member of the British Parliament and the DUP who continues to represent his father’s old constituency in North Antrim, may have been the driving force in the coup that ousted Foster as leader.

In its first democratic election for the position of party leader, another right-wing fundamentalist creationist following in the footsteps and shadow of Ian Paisley was selected. By the narrowest of margins.

Edwin Poots was chosen by the ‘No Surrender’ brigade of the DUP. Not to surrender to the British government and to continue the unwinnable fight over the Northern Ireland Protocol. Like King Canute, he stood against time and tide.

In order for him to nominate a new Joint First Minister to the Northern Ireland Assembly after Foster’s resignation, he needed to have the agreement of  Sinn Fein, the other party in government.

The political price asked by Sinn Fein, to jointly nominate leaders and thus prevent the structures of government from collapsing, was the implementation of the Irish Language Act, an act that was agreed upon by the DUP but never implemented.

Poots, the fundamentalist Christians, and the loyalists aligned to the party will have no truck with the advancement of the indigenous language.

They want no interaction with anything Irish.

They are the settler-colonial descendants who fight tooth and nail against the advancement of indigenous rights.

In order to find a workaround to the Irish Language Act, Poots and his designated Assembly team leader deferred the power to implement the act to the British Parliament.

Poots and his designate Girvan both signed an agreement along with Sinn Fein and the British government giving Westminster the power and a mandate to approve the Irish Language Act, in some form.

Poots and Girvan probably thought this would suffice to appease its base voters.

It was the British government forwarding the required legislation, not the DUP?

Instead, it created a mass revolt in the Democratic Unionist Party elected political leadership and those who lost the party leadership election to Poots rallied to have him resign.

Once again the ‘No Surrender, No Compromise’ brigade within the party has triumphed.
Foster couldn’t renegotiate the Northern Ireland Protocol, a loyalist unionist red line, and had to go.

Poots sold out Unionism by allowing the Irish Language Act (ILA) a red line for the fundamentalists, to be invoked.

By agreeing to the ILA and nominating Paul Girvan as First Minister of the Northern Ireland Assembly without his party’s approval he signed his own political death warrant.

In the year that sees the centenary of the establishment of Northern Ireland by Britain, when Ireland was partitioned in 1921, we now see the leaders of Unionism in disarray.

21 days in 2021 may well see the demise of the Democratic Unionist Party as the leaders of the Unionist voice of Northern Ireland.

With the party fundamentally split in more ways than one, we may have witnessed the wrath of a scorned political legacy.

Hell hath no fury as a political family scorned.