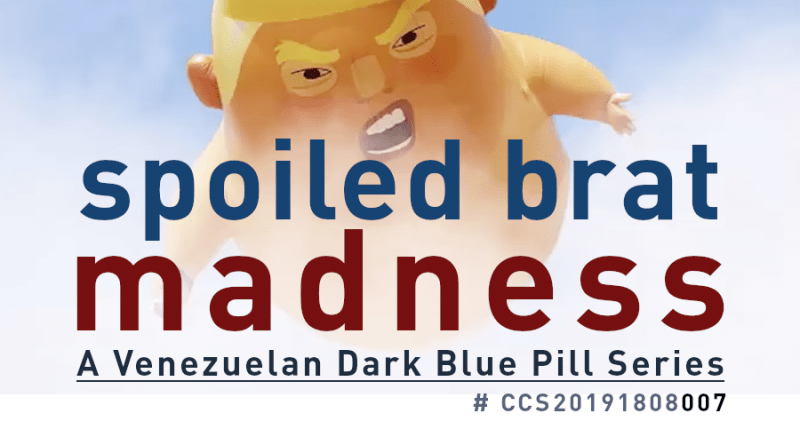 This past August 5th, Donald Grump, Mickey Pompei and Johnsemite Sam, AKA the Looney Goons, rolled out a full blown economic embargo against the Bolivarian Republic of Venezuela; further illustrating the historically bullying behavior of their proudly self-proclaimed Puritan Way of Life: give me your [whatever] or else.

While more than 4 million Venezuelans have migrated due to the harsh implications of an international financial and trade blockade, the remaining 26 million opted to abruptly adjust their highly consumerist culture, which peaked between 2007 and 2011 amidst a “state of social well-being never lived in our modern history”, to a more modest and productive one, many surviving thanks to an unquestionable resourceful legacy.

Most recently president Maduro shifted a handful of his cabinet members; the most notable ones, economic wise, were the appointment of:

However, the most significant national economic recovery burden weights on Tarek El Aissami, a lawyer and criminologist who stood out during his college years by his radical political activism, then tapped by president Hugo Chávez during 2003 and since has maintained a successful political career.

He started out by completely revamping the National Office of Identification and Foreigner Control (ONIDEX), back then the most notoriously corrupted government agency, and by successfully leading and implementing the 2004 program Misión Identidad.

His effectiveness at delivering solutions within the public sector and his loyalty to the Bolivarian Revolution has earned him early on his political career to be targeted by the deep state, recently accusing him of every single international crime possible, without providing a single thread of evidence, in a relentless effort to intimidate his commitment and undermine his efforts.

Mr. El Aissami was appointed Minister of Industries and National Production on June 2018, and although he is the mastermind behind the PETRO latest achievements, he has yet to show more tangible results; that is, increase national production and generate international sales across all the publicly held-and-managed corporations he is ultimately responsible for.

Successfully managing a conglomerate of enterprises that encompass steel, aluminium, metalworking, automotive, forestry, plastic, glass, paper, services, personal care, among others industries, that actually generate revenues is a whole new beast, specially since they all lack of organizational cohesiveness and drag legacies of poor managerial practices and horrible commercial vices.

Changing an organizational culture to make them operational and productive is a highly complex task that requires the appropriate counseling.

Transforming multiple organizations into profitable units is even a more ambitious endeavor that demands a trustworthy advisory team with proven corporate strategy experience and a track of successful business results.

If anything helps, here are the basic 3 pillars for a successful enterprise:

1) An improved solution to a problem.

3) The financial resources to cover the basics.

On the hands and brains of this prominent young man, who graduated from the Liceo Militar Jauregui, our most prestigious military high school, and who also spent a few years as a cadet at the Venezuelan Naval Academy, rest the foundation of a diversified and healthy economy, thus conquering our independence. Many of us hope he has the wisdom and humbleness to seek out help when he needs it the most, for the benefit and greatness of our nation.