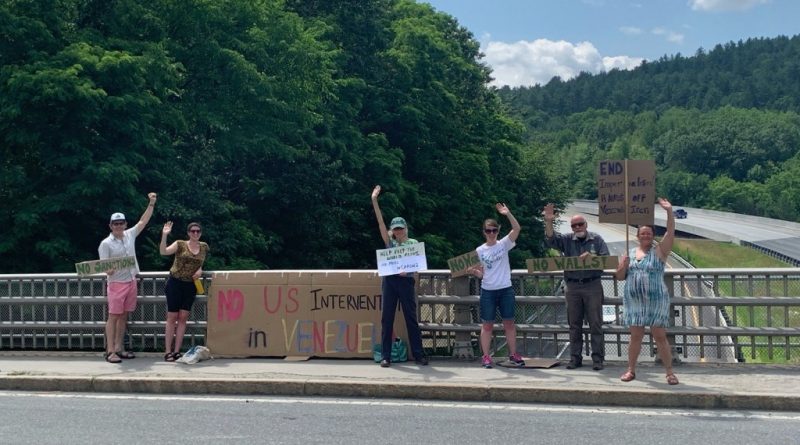 We are Vermonters concerned about the ongoing US intervention in Venezuelan
society. We ask that each member of Congress in the Vermont Delegation—Pat Leahy,
Bernie Sanders, and Peter Welch—to call for the cessation of the Trump Administration’s
immoral and illegal blockade of the Venezuelan economy. Additionally, we call on Senators Leahy and Sanders and Congressman Welch to encourage other members of Congress to insist that the Administration stop all hostile actions against Venezuela and let the Venezuelan people decide what happens in Venezuela.

The Trump Administration is causing deep harm to the people of Venezuela through its
sanctions and blockade. By forbidding imports of even food and medicines, more people
will suffer and die than already have. By encouraging Juan Guaidó, temporary head of the Venezuelan National Assembly, to declare that he is the rightful president of the country and then confiscating resources that belong to Venezuela and putting them at his disposal, the U.S. has tried to void an election held just last year. It was the decision of most of the opposition to President Maduro not to participate in the May 2018 election, but those that did participate overwhelmingly elected Maduro as President—by over 66 percent. The Venezuelan system of voting is considered to be one of the most transparent in the world; each person who votes electronically receives a paper confirmation how they voted, which is then deposited in a ballot box. There is a system in place to select a portion of the vote and compare the paper ballots with the electronic one. The United States—where individual states are actively engaged in outright voter suppression and corporations and rich individuals can give unlimited money to their favored candidate and party—has no moral authority to question the voting procedures of other nations.

Clearly, it is not the supposed “anti-democratic” nature of the legitimate Venezuelan
government that is causing such heartburn to Trump, Bolton, Pompeo, Abrams (of the Iran-Contra debacle), etc. For if lack of democracy really was a problem for them, they would begin any campaign for democracy with an embargo of Saudi Arabia.

We hope your response to this letter is swift. There are people suffering because of the
illegal US blockade. We are also emailing a copy to your office and hope to hear from you
by Labor Day weekend.

Thanks for your time,