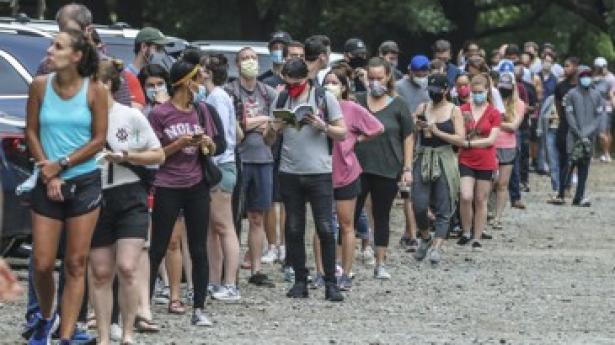 Efforts to make it more difficult for people to vote not only violate democratic principles, but are also illegal. The Fifteenth Amendment to the Constitution, prohibits the federal government and the states from denying a citizen the right to vote.

As the 2020 general election approaches, the Trump Administration and Republican-controlled states have ramped-up efforts to keep people of color from exercising their right to vote. Leaders of the Republican Party favor suppressing the votes of minority people, knowing they likely support Democratic candidates. In March 2020, The Guardian reported that Texas leads the South in closing voting locations, with the vast majority of closures in communities with large African-American or Latino populations. Other voter suppression tactics include laws making it more difficult to register new voters, or requiring voters to show a government-issued ID. In 2014, Alabama began enforcing a law requiring specific types of photo ID in order to vote, while contemporaneously closing DMV offices where the ID is issued, in 8 of 10 counties having the highest percentage of black voters. In the run-up to the 2020 general election, Republicans are focused on limiting the use of mail-in ballots as another way to reduce voter turnout. In addition, voter roll purges will prevent those who are purged from getting a ballot. If in-person voting becomes the only option, voters fearing exposure to Coronavirus must risk their health to vote. Transportation difficulties and long waits at polling sites discourage many poor and working people from voting.

Efforts to make it more difficult for people to vote not only violate democratic principles, but are also illegal. The Fifteenth Amendment to the US Constitution, passed shortly after the Civil War during Reconstruction, prohibits the federal government and the states from denying a citizen the right to vote based on his or her “race, color, or previous condition of servitude.” Unfortunately, after Reconstruction gave way to Jim Crow, the Supreme Court said the Fifteenth Amendment did not guarantee the right to vote, but only prevented denial of that right based on a voter’s race. State and local officials quickly devised ingenious ruses to deny minority voting rights.

Nearly a hundred years later, Congress enacted, and President Lyndon Johnson signed, the Voting Rights Act of 1965, to counteract those ruses and enforce the Fifteenth Amendment.  The 1965 Act included an enforcement provision that targeted specified jurisdictions where discrimination had been rampant.  It forbade those jurisdictions from implementing any change affecting voting rights without preclearance from the federal government. The Act proved effective until the Supreme Court, in Shelby v. Holder, eliminated this federal protection. Since that time, state and local lawmakers have freely taken actions that put obstacles in the way of people trying to vote. The Brennan Center for Justice reports that jurisdictions no longer subject to federal preclearance had significantly elevated purge rates in the general election cycle that followed Shelby.

In 1993, Congress passed the National Voter Registration Act to address barriers to registration. The law requires public benefits offices, including Departments of Motor Vehicles, to register people to vote when they come to get benefits or a drivers’ license. This law also declares the right to vote is a fundamental right. That means governmental efforts to restrict the right to vote must have a compelling purpose.

Additional protection for voting rights in the U.S. is guaranteed by treaties that the United States has ratified. Article VI, section 2 of the Constitution states “… all Treaties made, … under the Authority of the United States, shall be the supreme Law of the Land; and the Judges in every State shall be bound thereby, any Thing in the Constitution or Laws of any State to the Contrary notwithstanding.” Thus, ratified treaties are the supreme law of the land.

The Universal Declaration of Human Rights, or UDHR, of 1948 was written under the auspices of the United Nations. The United States was a prime mover in drafting the UDHR and Eleanor Roosevelt was one of its authors. The right to vote is expressly enshrined in Article 21 of the UDHR, which provides, “Everyone has the right to take part in the government of his country, directly or through freely chosen representatives.” The rights set forth in the UDHR were written into binding treaties which more specifically define those rights. The United States has ratified two treaties that address voting: 1) the International Covenant on Civil and Political Rights (ICCPR) and 2) the Convention on the Elimination of all Forms of Racial Discrimination. (CERD).

Article 25 of the ICCPR declares that every citizen shall have the right and opportunity “to take part in the conduct of public affairs… to vote and be elected at genuine periodic elections.”   The rights guaranteed in Article 25 are to be enjoyed without distinctions based on race, color, sex, language, religion, political or other opinion, national or social origin, property, birth or other status. The body which interprets the ICCPR has stated that, “Article 25 lies at the core of democratic government based on the consent of the people and in conformity with the principles of the Covenant. States must take effective measures to ensure that all persons entitled to vote are able to exercise that right.”

Now is the time for people to demand that state and local governments take effective measures to ensure all eligible persons are permitted to exercise their right to vote. “Effective measures” means removing barriers and obstacles to voting.  Those obstacles include strict voter ID laws and inadequate access to polling places in areas where minority voters predominate.

Litigators and activists should expand their legal arsenal as they attack voter suppression. They tend to rely upon existing constitutional and statutory provisions to seek enforcement of voter rights. They should also use ratified treaties, such as the ICCPR and CERD, which impose affirmative duties on states to take all effective measures to ensure all those entitled to vote can vote. We must insist that all eligible voters have ready access to cast a ballot in the crucial upcoming 2020 general election.

Jeanne Mirer is a partner in the New York Law firm of Mirer, Mazzocchi & Julien PLLC where she practices primarily Labor, Employment, Civil and Human Rights Law.  She is the President of the International Association of Democratic Lawyers.

Jerry Wallingford is a long-time criminal defense attorney in San Diego and a member of the National Lawyers Guild.