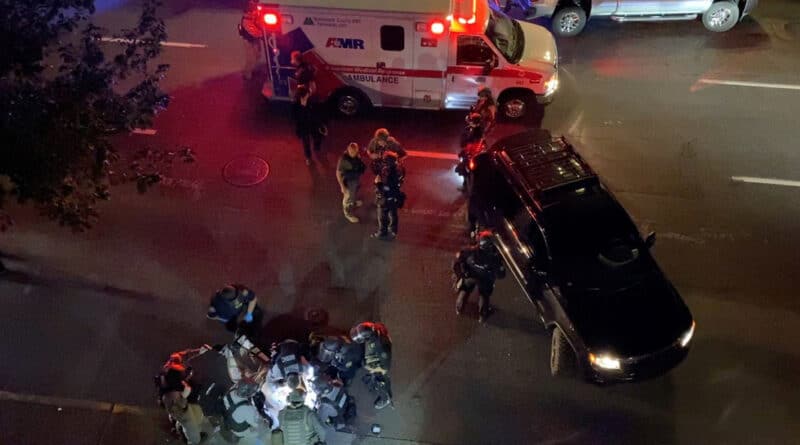 August 31, 2020.- The identity of the man under investigation for the shooting death of a Donald Trump supporter in Portland, Oregon has been revealed. He is reportedly an ex-military Black Lives Matter supporter who calls himself “100% Antifa.”

Though he has not been formally named by police, the Oregonian is reporting that Michael Forest Reinoehl, 48, is under investigation for the death of Aaron ‘Jay’ Donielson, a member of the right-wing Patriot Prayer group who was shot and killed during clashing protests in Portland on Saturday.

Reinoehl’s sister was interviewed by the paper and confirmed that screenshots of the suspected shooter were of her brother, who has been estranged from most of his family.

The distinctive mark that confirmed his identity to family members is a tattoo on his neck of a raised fist.

She condemned the shooting and warned it is not “the solution” to any of the US’ problems.

“Violence begets violence and hatred begets hatred. This is not the solution. My heart goes out to the victim. It always has, before I even knew my brother was involved,” she said.

Reinoehl’s social media posts include him calling himself “100% Antifa” and talking about a coming “war” in America that will include “casualties.”

“It will be a war and like all wars there will be casualties,” he wrote. He called those protesting across the nation in cities like Portland and Kenosha his “brothers in arms.”

Reinoehl has a criminal history, including charges stemming from a July 5 protest for carrying a loaded weapon, resisting arrest, and interfering with police. Reinoehl was supposed to appear in court on July 30 to face the charges, but he was released and the charges were never pursued. The Multnomah County District Attorney’s office is currently reviewing the case.

“We reached out to police and confirmed that we recognized Michael in the screenshots,” the sister, whom the paper did not identify by name, said.

The suspected shooter had also been charged for allegedly racing his 17-year-old son and driving 111mph (178kph), as well as carrying a loaded Glock pistol he did not have a concealed carry permit for, while transporting his 11-year-old daughter. He was charged with driving under the influence, recklessly endangering another, driving while suspended and uninsured, and unlawful possession of a gun for that incident, for which there is a warrant out for his arrest.

Reinoehl’s social media posts have gotten particular attention as both Democrats and Republicans have attempted to pin the blame for the shooting and other violence at protests on one another, with both #BidenRiots and #TrumpRiots trending on Twitter following the incident in Portland, which stemmed from Black Lives Matter and Antifa protesters clashing with a vehicle caravan of pro-Trump supporters.

“Joe Biden has refused to say a single negative word about antifa and the media has spent the last 3 months defending them. Why is that?” Donald Trump Jr. tweeted on Monday, along with a link identifying Reinoehl.

Joe Biden has refused to say a single negative word about antifa and the media has spent the last 3 months defending them. Why is that? #BidenRiots

Michael Reinoehl says he is 100% Antifa and he murdered for Antifa. Unlike Kyle Rittenhouse no one was attacking him. There is no self defense claim. Stone cold terrorist murder as Antifa celebrated it on video. They are terrorist. https://t.co/kxXA8nfQwx

Wow — Portland PD and Antifa-loving District Attorney let this psycho loose only last month after he brought a gun to a riot? @tedwheeler — this death is on your hands. You are the police commissioner and YOU let this happen. https://t.co/1g1zyEifgV

Portland Mayor Ted Wheeler, who has opposed the help of the National Guard to help control increasingly violent protests in his city, blamed President Donald Trump on Sunday for helping to encourage violence with his rhetoric.

The president responded by blasting Wheeler as a fool, and warned that the federal government will intervene if Portland’s mayor cannot “clean” his city up.

Portland is a mess, and it has been for many years. If this joke of a mayor doesn’t clean it up, we will go in and do it for them!