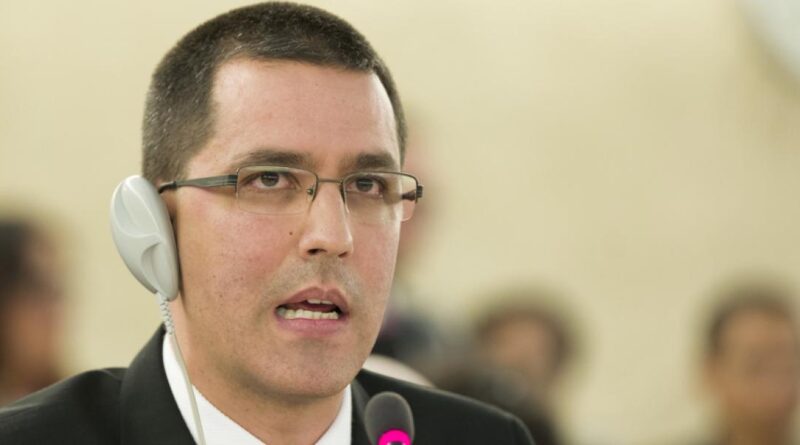 In what may be one of the most forthright criticisms ever leveled by a foreign minister of another country against Canada, Jorge Arreaza recently spent an hour detailing Ottawa’s bid to overthrow his government.

“Under the guise of defending human rights, they began to intervene in our internal affairs,” Arreaza said during an online talk organized by the Canadian Foreign Policy Institute. The Venezuelan foreign minister claimed Canada leads the anti-Maduro Lima Group of countries on behalf of Washington. The “real orders are given by Canada but especially from U.S.,” he explained.

Arreaza also criticized the Liberal government’s role in building support for self-proclaimed president Juan Guaidó. He named Canada as “the only country that forbid Venezuelans from voting” in its diplomatic posts in the 2018 presidential election.

Venezuela’s foreign minister devoted a significant portion of his talk to detailing the economic and social damage caused by U.S. and Canadian sanctions. He quoted The Art of Sanctions by former U.S. state department advisor Richard Nephew, explaining the objective of these coercive measures is to cause “pain” until a government succumbs to Washington’s whims.

RELATED CONTENT: Venezuela’s Arreaza and the Canadian Public Call for No Military Operation Against Venezuela

Canada has imposed four rounds of sanctions on Venezuelan officials, including on Arreaza. Illustrating one impact of these measures, Arreaza noted that a Venezuelan youth sports team had been blocked from competing in Canada.

Canada is at the “vanguard of aggression against Venezuela,” said Arreaza. “They want to create the conditions to be able to attack Venezuela, to invade Venezuela, because they want to take control of our country and its wealth, its natural resources. Of course, they want to eliminate the ideology of our government, of our people.”

Arreaza directly addressed Canadian Foreign Minister François-Philippe Champagne, offering to meet in Mexico or elsewhere to discuss bilateral relations. He also called on Canadians to push their government to normalize relations with Venezuela.

Arreaza argued that U.S. President Donald Trump’s rise, and the appointment of Chrystia Freeland as foreign minister in 2017 precipitated a shift in Canadian policy. He suggested the Liberals may have calculated that aligning with Trump on Venezuela was a relatively inexpensive way of papering over differences on other issues.

A March 2017 cable from the U.S. embassy in Ottawa to the state department titled “Canada Adopts ‘America First’ Foreign Policy” gives credence to this view. Dispatched a few weeks after Freeland was appointed foreign minister, the memo uncovered through a freedom of information request notes Trudeau would be “Prioritizing U.S. Relations, ASAP.” It also stated that Trudeau promoted Freeland “in large part because of her strong U.S. contacts.”

Despite pointed criticisms, Arreaza veered into mythologizing Canadian foreign policy history in Latin America. He exaggerated the scope of the recent shift in Canada’s direction, as well as celebrating Justin Trudeau’s father Pierre, who supported the 1973 coup against Salvador Allende in Chile.

The reality is there has been open conflict between Ottawa and Caracas for many years. The Chretien government failed to criticize the April 2002 overthrow of Hugo Chavez until he was returned to office, and when the Harper government prorogued Parliament in 2009 Conservative cabinet minister Peter Kent visited Venezuelan opposition figures, telling the media “democratic space within Venezuela has been shrinking and in this election year, Canada is very concerned about the rights of all Venezuelans to participate in the democratic process.”

Venezuela’s then-ambassador to the Organization of American States, Roy Chaderton Matos, responded by saying Ottawa supported “coup plotters” and “destabilizers” in Venezuela: “I am talking of a Canada governed by an ultra right that closed its Parliament for various months to (evade) an investigation over the violation of human rights — I am talking about torture and assassinations — by its soldiers in Afghanistan.”

Leaving aside Canadian foreign policy history, Arreaza’s presentation was powerful. There is often little substance to politicians’ speeches, and irrespective of whether one agrees with the Venezuelan government’s position, Arreaza offered a thorough critique.

It was also a major political event. With the co-founder of Pink Floyd, Roger Waters, introducing the talk and sharing it with his 2.5 million Facebook and Twitter followers, tens of thousands heard about it beforehand. Thousands of Canadians have watched the event, and it was live streamed on the Venezuelan foreign ministry’s Twitter account and shared widely by Venezuelan diplomats around the world.

There is a growing appetite to challenge Canadian policy in the aftermath of Canada’s second consecutive defeat for a United Nations Security Council seat. At a recent talk on Canada’s role in Bolivia, for instance, NDP MP Matthew Green declared “we ought not be a part of a pseudo-imperialist group like the Lima Group” while a “Twitter rally” challenging Canadian policy during the Arreaza talk was amplified by MPs Elizabeth May and Leah Gazan, as well as Romeo Saganash, Judy Rebick and Linda McQuaig.

A recently released open letter addressed to the prime minister poses the question: “Why is Canada involved in efforts to overthrow Venezuela’s UN recognized government, a clear violation of the principle of non-intervention in other country’s internal affairs?”

The question on Venezuela is part of a broader call for a “fundamental reassessment of Canadian foreign policy,” and has been signed by Canadian figures such as David Suzuki, Naomi Klein, Stephen Lewis as well as sitting MPs Leah Gazan, Paul Manly, Alexandre Boulerice and Niki Ashton. It is also supported by nearly 50 groups across the country including Greenpeace Canada, 350.org and Idle No More.

The Trudeau government’s support for Trump’s aggression against Venezuela is getting harder to sustain in the face of growing public pressure. Those who believe Canada should support a rules-based international order rather than the U.S. empire must continue to press Ottawa.

Bianca Mugyenyi is an author, activist and former co-executive director of The Leap. She currently directs the Canadian Foreign Policy Institute.