In the past few hours ten officials, including carriers and managers, of Venezuela’s state-owned oil company PDVSA were arrested for diversion of diesel and premium gasoline at the Bajo Grande refinery and distribution plant, located in the city of Maracaibo (Zulia state). This was communicated to the country on Thursday, April 29, in the weekly press conference by the Attorney General of Venezuela, Tarek William Saab.

“The investigation was initiated by virtue of a complaint lodged by the manager of Comprehensive Security of Operations and the International Trade and Supply Market. It was determined that there was a significant loss between recording the volume received from the plant, and what was actually dispatched to the west of Venezuela,” said the Attorney General.

“This should be severely condemned, because in the midst of a crisis resulting from [US and European] sanctions and blockade… these individuals have tried to criminally commercialize the fuel, indifferent to the damage they cause to society. They practically became allies and accomplices of those who have promoted the blockade and sanctions,” said the highest authority of the Public Ministry. 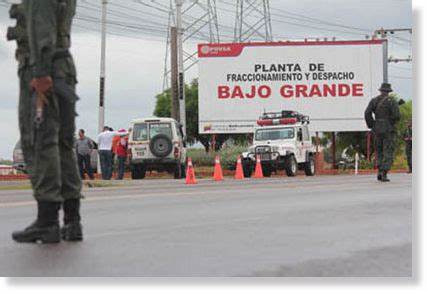 Who they are, and their crimes
The following citizens were allegedly involved in the corruption scheme: José Corobo, supervisor of processes and procedures in National Market Management for the Western District; Ranulfo González, a supervisor in the same unit; Larry Salcedo, plant supervisor in the aforementioned management unit; Albeiro Agudelo, manager for the unit’s Western District; Yerni Anciani, operations technician; Carmen Castillo, from the Autonomous Service of Hydrocarbons Methodology; Mayrelin Guasamacuro, superintendent of sales; and Belkys Guartín, superintendent of the National Market Comprehensive Security Directorate.

The suspects will be charged with the crimes of aggravated smuggling, malicious embezzlement, terrorism, and criminal association, said the prosecutor.

“We have always wanted to proactively present before public opinion these cases, and call on all of Venezuelan society to maintain their trust in Venezuelan justice system,” Saab said in the closing comments of his speech.

Featured image: Apart from harsh and illegal US and European blockade, Venezuelans also suffer from a corruption epidemic. Photo courtesy of RedRadioVE.