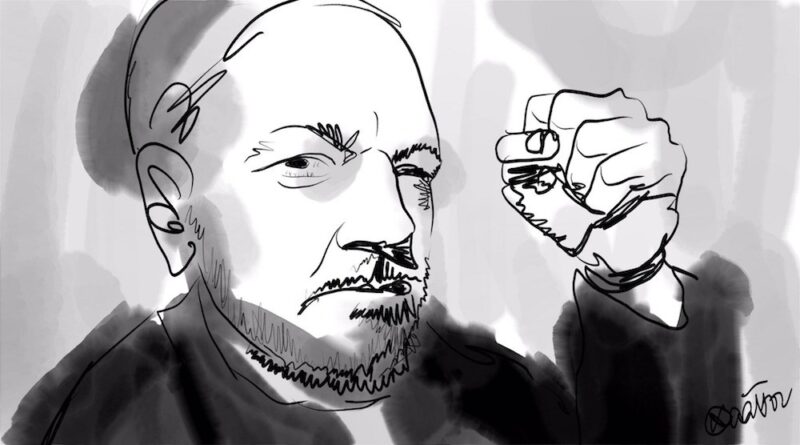 The most powerful government in the world is currently conducting a prosecution to protect its right to lie to the public about the evil things that it does, and somehow the public isn’t shaking the earth with unmitigated rage about this.

“Assange isn’t a journalist! He has an agenda!”

Every journalist in the world has an agenda. It just happens that most journalists have fame, wealth and esteem as their agenda while Assange’s agenda is, in his own words, “crushing bastards”.

It’s crazy how there are still people who try to claim Assange isn’t a journalist. He is, and it’s not even debatable. Publishing information that informs the public about what’s going on in the world is exactly the thing that journalism is.

The mainstream press have been far, far less critical of immensely powerful world-dominating government agencies than they’ve been of one thin, frail man locked in a cage who published inconvenient facts about those agencies.

If I died today my one regret would be that I wasn’t mean enough to shitty MSM reporters.

Step 1: Destroy nations and displace tens of millions of people.

Step 2: Wait for some of those people to hate you and want to fight back.

Step 3: Use their desire to fight back as justification to repeat Step 1.

Ask someone how much a dollar bill is worth and they’ll tell you a dollar. Put a gun to their head and ask “Are you sure it’s not worth 100 dollars?” and they’ll say “Ah yes you’re right, my mistake.”

That’s the economy under the US empire.

Q: What is Novichok?

A: Novichok is a very gentle poison which the Kremlin uses whenever it wants to ask the world to please smash Russia via economic warfare without actually endangering the life of its target.

No US soldier has died for any reason that could be described as heroic, or even justifiable, for generations. We simply do not have a world order where such a thing happens anymore. They only ever die defending the interests of corporations and depraved government agencies.

Hi I’m Leftish McPundit. If you leftists actually care about getting things done you need to do the practical, pragmatic, realistic thing and support the party that actively sabotages all your agendas and is openly saying it won’t get anything done.

Trump supporters who act like they’re nonpartisan outsiders that see beyond the two-party system are hilarious. Minus the hysterical narrative spin he’s a garden variety Republican with comparable GOP support to other Republican presidents. Trump supporters are the same as MSNBC Democrats.

Three months ago Americans were talking about dismantling the police state. Now they’re talking about fighting each other. The crosshairs are always moved off of actual power structures. Who benefits?

There’s disagreement between America’s two mainstream political parties about the exact underlying cause of protests against racism, injustice and police brutality, but they’ve narrowed it down to either Russia or China.

It’s so dumb how people babble about relations between China and Australia worsening. No, the US is ramping up its escalations against China to prevent the creation of a multipolar world and Washington’s servile basement gimp Australia is along for the ride. That’s all this is.

They act like it’s just some natural thing that happened all by itself. “Aw yeah we just spontaneously decided we need to spend $270 billion on military posturing against our top business partner and bleat about Wuhan and we all hate TikTok now for some reason.” Idiots.

I am constantly being lectured that increasing aggressions against China is the only possible option by people who have literally never heard the word detente in their lives.

Believing China wants to take over your country so it can have control over a bunch of random white people is as dumb and egocentric as believing space aliens would fly across the galaxy to stick probes in your butt.

Ten percent of my social media notifications every day for the last four years:

“Caitlin I’ve noticed you have opinions about the most powerful and influential government on planet earth. As an American, I find this strange and suspicious.”

In a world that is dying and a society that is insane, “It’s always been that way” is never a valid argument.