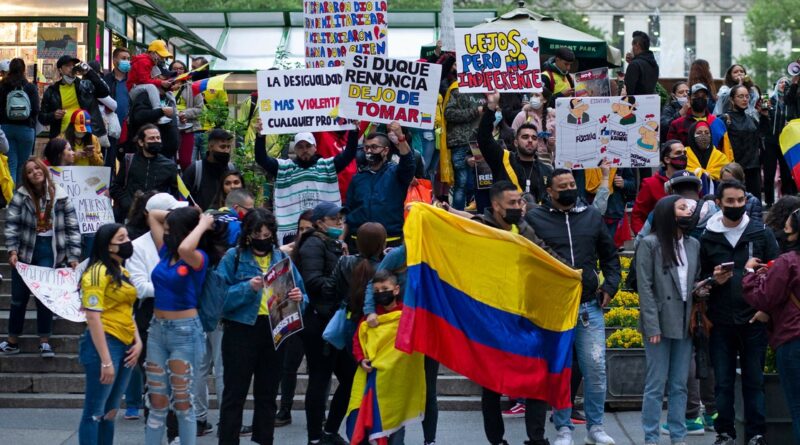 Both the fierce protests and the brutal repression in Colombia have deep historical roots, and the outcome of the current crisis will certainly have crucial geopolitical consequences for the entire Latin American region.

Before launching his controversial tax reform on April 15, President Iván Duque had received instructions from Washington. On April 6, US Secretary of State Anthony Blinken personally spoke on phone with Duque about “the multifaceted alliance between Colombia and the United States,” “the economic recovery from the pandemic,” and “the shared commitment to reestablishing democracy and the rule of law in Venezuela.” Subsequently, on April 12, Duque personally received Juan González, senior director of the National Security Council of the US government for the western hemisphere, at Casa de Nariño, seat of the Colombian Executive Power.

That meeting drew attention because, normally, a third or fourth level official like González would not be met directly by the President of the Republic as if he were a Head of State. But everything seems to indicate that González would play a similar role during the Joseph Biden administration as the one played by Jared Kushner during the administration of Donald Trump. As Biden’s chief political advisor and operator in Latin America, González’s real power will far exceed his stated official responsibilities.

And, the fact that González is originally from Colombia is no accident or coincidence either. This country is at the center of Biden’s strategy to reposition US power in Latin America, its so-called backyard, so as to transition from Trump’s “America First” to the “America is Back” that has already been documented extensively. In a complementary manner to the new aggressions towards Russia and China, exposed with great precision by William Robinson, Colombia would be the spearhead for Washington’s renewed aggressive policy in Latin America.

Colombia was one of the only countries left out of the “pink tide” of leftist governments that came to power in the entire region during the first decade of the 21st century. Until 2018, Colombia along with Mexico had been the great exceptions in this regard. But now it is only Bogotá whose “long neoliberal night” (Rafael Correa dixit) seems to have no end in sight.

Biden knows Colombia well. As a senator on the Foreign Relations Commission, he was one of the main promoters of the murderous and interventionist Plan Colombia approved during the Bill Clinton administration in 2000. González is also a known supporter of Plan Colombia and an ally of the right-wings in South America. He has even gone so far as to publicly justify Juan Guaidó’s misadventures in Venezuela.

Hence, it should come as no surprise to anyone the infuriating lukewarm complicity of both the United States government and the Organization of American States (OAS) in the face of the brutal police and military repression of unarmed protesters in Colombia that has left more than 32 dead, 15 victims of gender violence, 450 people injured, 500 missing, and 1,000 arbitrary arrests, according to local civil organizations.

In a recent pronouncement, through a third level spokesperson, the US Secretary of State limited himself to generally condemning “the loss of life” in the recent protests as well as initially condemning the “vandalism” of protesters. Luis Almagro, Secretary General of the OAS which is a lapdog for Washington’s interests in the region, copied exactly the same script in his corresponding statement.

The evident contrast between these lukewarm pronouncements and the “strong condemnations” issued by the same actors a few weeks ago against the Bolivian government for the arrest of the coup leader Jeanine Añez is obvious.

The repression in Colombia arises from the racist, reactionary and neoliberal ideology of the Duque government. Since his 2018 election campaign, he has been outspoken against the 2016 peace accords and in favor of the persecution of former FARC rebels. During the first three years of his mandate, President Duque has kept his campaign promise by allowing (facilitating? ordering?) the assassination of hundreds of ex-guerrillas who had already taken the step of reincorporating into civil society and peaceful life.

But it would be a mistake to focus exclusively on the local factors of the Colombian conflict. The reason behind the Duque government’s repression is not some mental disorder or bad political calculation, but Washington’s orders. Duque’s dead are also Biden’s, Blinken’s and González’s.

Correspondingly, the dignified struggle of the Colombian people is not a local issue either; rather it constitutes the vanguard of a broad regional struggle for the sovereignty of the peoples of Latin America in the face of US colonial endeavors, and in favor of “the second emancipation of Latin America.” I recently discussed this on TV UNAM [Mexico] with the great philosopher and historian Enrique Dussel:

Let us send, from all corners of our Patria Grande, our absolute solidarity with the people of Colombia.

Featured image: Protest in New York by Colombians resident in the United States and solidarity activists for the people of Colombia. Photo AFP