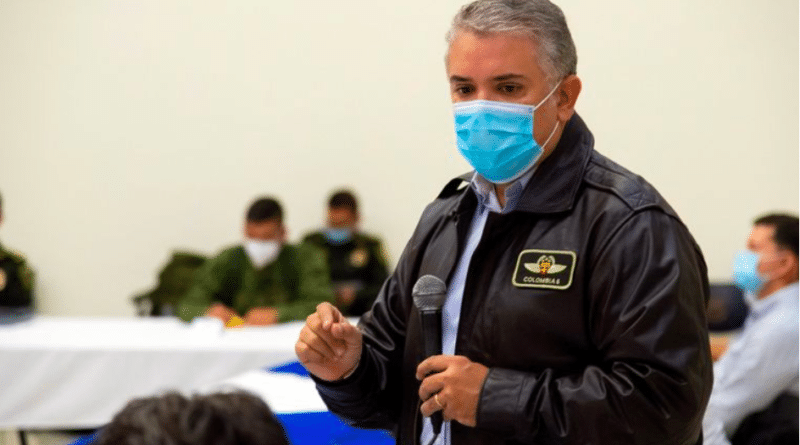 The president of Colombia, Iván Duque, made a lightning visit early morning on Monday, May 10, to the city of Cali, the epicenter of the protests that have been going on in Colombia since April 28. The president stayed in Cali for hardly four hours to meet with the security council established there in the aftermath of the paramilitary attacks perpetrated against an indigenous minga [community reunion].

On May 9, Duque was emphatic that he had no intention of visiting the capital of Valle del Cauca department; however, eventually he yielded to the pressure from the members of his Democratic Center party. At 3:47 a.m. on Monday, Duque announced via Twitter that during his visit he sought to strengthen public order, and verify if there had been any progress in regard to social dialogue, although he himself did not meet with any of the Cali protesters, nor did he tour the streets of the city. His covert visit has been perceived by some as an act of “cowardice.”

After meeting the mayor of Cali and the governor of Valle del Cauca, Duque announced, “I want to take advantage of this medium to transmit a message to all the young people of the Valle del Cauca department. The message is that we are aware of the needs of the youth, their claims, their proposals…”

Cali on fire
News network TeleSur reported that Cali woke up to a tense calm this Tuesday morning in the aftermath of clashes between police and protesters over the weekend, which left eleven people injured; eight of them indigenous. Several vehicles had also been set on fire in the course of the clashes.

Fifteen people have been killed in the city since the start of the protests while dozens have been injured. What is even worse, there have been clashes involving allegedly plainclothes policemen.

The situation has become increasingly critical with the highest police and military presence in the territory in decades. In addition, Cali residents have denounced that the government has ordered cuts to the energy service and internet signal in order to restrict the flow of information about whatever is happening in the region.

Duque’s double standard
Duque’s stealthy tour in Cali, a city in the country that he governs, was in stark contrast to his performance in February 2019, when he addressed Venezuelans on the Simón Bolívar Bridge. During that incident, there was an intention of violating Venezuelan sovereignty for allegedly humanitarian aid purposes, flouting internationally established protocols, and which ended up being a scam and a smoke screen against Venezuelan institutions. At that time Duque, standing in the middle of the bridge in front of journalists and cameras, thundered that “the world has realized once again the barbarism that exists in Venezuela, and I believe that this should allow the international community to tighten their diplomatic siege so that Venezuela can recover its freedoms, its institutional order and its democracy.”

However, this time, in his own country, Duque did not face the situation in Cali in the same upfront manner that he did at the Venezuelan border. First of all, his visit was fleeting and in hiding; and, secondly, he did not meet face to face the people whose human rights have been violated during the police repression on the protests.

Featured Image: Iván Duque, president of Colombia, made a stealth visit to the city of Cali on Monday morning. Photo: Nicolás Galeano EFE.