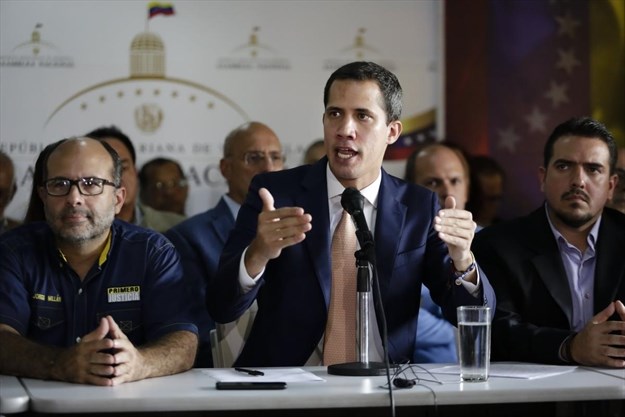 Like all fairy tales, this article is based on typecast characters who bear little resemblance to reality, writes Gerrard Bonello.

The “hero” is self-proclaimed president Juan Guaido, who assumes the guise of a mild mannered United States agent. He battles to “restore” democracy from the clutches of demonized elected President Maduro. True to his heroic character, Guaido fights a battle for the “American Way,” by peacefully seeking an assumption of power. His brilliant plan is contingent on persuading the ruling President Nicolas Maduro to fly to Cuba. Along the way, Guaido convinces some top military and civilian aides to join him.

His plan is validated with a blessing from his benefactor, the Trump administration. It monitors his efforts closely, and shows restraint while considering military intervention as an option. Instead, it imposes sanctions and helps “run back-end logistics for aid deliveries to Colombia for the Venezuelan people, and a U.S. navy hospital ship sailed to neighboring Colombia to aid Venezuelan refugees.”

Throughout the story, Guaido’s claim to the presidency is never disputed. How could it be? He is a heroic champion for democracy. As proof, the story points out that he has the backing of the National Assembly and more than 50 nations.

Had his plan succeeded, the story would have had a happy ending. Big bad Maduro would have been allowed to leave in peace. Our hero, Juan, would have led a successful coup and thereby restored democracy. Venezuela would have once again had the United States as its friend, and everyone would have lived happily ever after.

Alas, the dream of an American Venezuela was not to be. Juan’s enthusiasm got the better of him. He prematurely attempted his coup for democracy and his plan was a failure. Instead of supporting heroic Juan, the Venezuelan military rallied behind their constitutionally-elected president.

Sadly, the story ends with the allegation that Maduro would have abandoned ship had he not been talked out of it. Who could be blamed for undermining such an otherwise flawless plan? The Russians, of course.

This fairy tale teaches some important lessons: 1. To restore democracy, a coup is needed to overthrow an existing democracy. 2. A hero is someone who seeks the help of outside forces, with the expectation that they use military force against his country, to assure his ascent to power. 3. Before providing humanitarian assistance, impose crippling economic sanctions to necessitate the need for aid. 4. Recognition of a self-proclaimed president by more than 50 nations is more important than the plebiscite of the majority of a country’s constituents and/or the recognition by a majority of United Nations members. 5. If all else fails, blame the Russians.

Like all fairy tales, this article is based on typecast characters who bear little resemblance to reality. What would have given this account credibility as fact, rather than fiction, would have been the inclusion of several facts reported in the mainstream news that would have given it a balanced perspective.

As was repeatedly aired on TV news networks, Juan Guaido swore himself in as president. Is this the type of democratic process that is worthy of endorsement?

There is no evidence that Maduro ever considered abandoning his post or engaged in secret negotiations with Guiado. Maduro denied this. Moreover, the possibility that his efforts to remain in power could be interpreted as patriotism is never considered. This is in stark contrast with Guiado who has had several photo-ops with U.S. Vice-President Mike Pence, and is quite open about plotting the overthrow of his government through consultation with the U.S.

Given Venezuela’s economic hardships and vocal opposition, why does Maduro still have a loyal military, as well as large supportive public demonstrations? To answer these questions would require another article detailing the numerous programs that he and his predecessor, Hugo Chávez, implemented to prioritize the needs of the poor.

In most Western democracies, if anyone were to plot a coup, as Guaido openly professes, he would probably be deemed guilty of treason and terrorism. This indictment is never pointed out. Nor is it asked why Guaido still roams the streets and speaks freely, especially if Maduro is a dictator?

The aims of the U.S. are presented as humanitarian. Why weren’t these “humanitarian” efforts of the U.S. endorsed by the Red Cross? Conveniently, U.S. national security adviser John Bolton’s statement about how beneficial it would be for the U.S. to have U.S. companies controlling Venezuelan oil was also omitted.

Fact or fiction, Venezuela is a sovereign nation struggling to resolve its internal disputes. If international law prevails, it would be allowed to do so without outside interference. If that happens, then it might not have the “happy ending” that the mainstream media are rooting for. Nevertheless, it would be a resolution that would have been decided by the Venezuelan people.