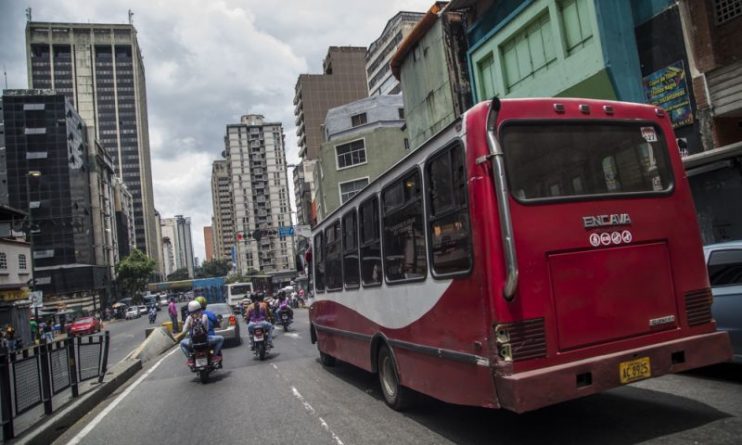 Sometimes you fall asleep thinking and do not sleep but think. My companion doesn’t sleep imagining how to solve the commuting, in the robberies to the schools in charge of the institution where she works, in the medicines that are not there for teachers who write desperately to the office, in the number of days that we have been without water, in the people who put drama on her and she and has not received half of the beating that she have, in her daughter ultra small jeans, thinks of motherly things, daughterish things … and surrenders to the traitorous dream few minutes before having to get up.

Thinking about medicines becomes a problem when someone you know looks for, for example, insulin, with indignation recalls that “freezing” in an international port of a shipment with more than 300 thousand doses because Citibank refused to receive the Venezuelan dollars to pay for the import. Then the media goes out to say that we live in a humanitarian crisis, that “sanctions only affect the government” and some friends of the government , who do not ask for the blockade to end, just send donations, which is appreciated.

Thus wake up with a laziness that turns into a fast-forward at that moment of waking up the kids, heating the water for their shower, scrub some dishes, taking a shower while I make breakfast. A laziness heavier than lead pushed by an calendar full of issues, uncertainty, “what comes will come” and a deep faith and hope as her eyes.

This is how the kid leaves early for the high school where he started recently, he studies in Downtown Caracas but we do not live in that area, so he has to travel by Metro and bus on a journey that, during peak hours, can be longer than one hour.

The first time I had him enter alone a crowded metro car I was overwhelm to see that frightened dwarf stuck to the window’s glass, I did not cry because whoever cries leaving an inheritance is because he does not want to give it. The inheritance, in this case, is to learn to know the street and the history as a learning complex that teaches you as much or more than the school.

With that uncertainty she also leaves with the our daughter to the school. They arrive at the avenue with a checklist written on their shoes, from time to time they try the Metro, but at that time it does not make much sense, it is inaccessible. If there are many people at the bus stops in Downtown then “plan B” is to walk for half an hour to another where people who come from far or where the drivers drop passengers to return, as they do since they decided to shorten and divide the routes “by the issue of the spare parts”. If you can not get on a bus at that stop, then “plan C” is to get on the Bus Caracas, which is the most effective social connection attempt of the twenty-first century in Caracas.

One day all the plans failed her, even that of the previous night, which was to sleep well and rest, in the middle of the street she had an anxiety attack, she collapsed in tears, the girl took the helm of calm and said: “Calm down, Mom, let’s go to the house, when I get upset I go to bed until it’s over. ” From that cry today there is a privileged joke: so much to fight with that little girl so that she does not think like a princess and assumed herself as a warrior when her mother collapsed.

The stories about what happens with the Metro, for example, are diverse. She learns that the delay is due to technical failures when the thing is apocalyptic and something is posted on Twitter, but the normal thing is to hear that a few hundred percent of the operators have gone to other countries or that robbers have stolen cables and pipes. The fact is that these failures are weapons of war, the enemy exhibits them as health or food and spits them out like that sordid scene where the heads of their own soldiers were thrown into a city. Newspapers like El País of Spain named Venezuela in almost 70% of its editions of 2017.

A neighbor, who works linked to the issue, says that the Metro (but also electricity, water, telephony, etc.) is a combination of lack of personnel who left his post in an epidemic of disappointment with the collapse of maintenance plans in the absence of supplies and parts that are difficult to buy. That the procedures are increasingly complicated by the pressure of the United States to suppliers, the international attack of risk rating agencies, the limitation of access to sources of financing and other financial blocking strategies.

Another neighbor who was a bus driver on the route in our area talks about the internal mafias in the transport companies and how some participate in the cash black market, of the 81 thousand carriers a few coexist and many others are victims of the mafias of sales of spare parts in which there has always been a state of exception with the prices, more now that they charge with a spiral of hatred and unusual amounts that does not seem to stop.

Not only going to school is a daily challenge, if your kid is an athlete it can happen as the 15 Venezuelan boxers who could not reach the qualifying event for the Central American and Caribbean Games this year due to the sabotage of travel agencies ; They raised the price of the ticket from 300 to 2 thousand 100 dollars per person upon learning that it was the transfer of the Venezuelan Boxing Federation. When a private offered a charter flight to transfer the team, Colombia, Panama and Mexico denied the use of their airspace. It was repeated with the women’s volleyball team, Guatemala denied visas to our rugby team to participate in the South American 4 Nations B and also to the national wrestling team for the Pan American Championship.

They are operations that try to wear us down, disenchant us and make us become a pariah country without dignity.

To go down more than 20 floors, to walk more than six blocks, to get into whatever bus however is possible and to go up another seven floors is every morning for her. Fight for the hidden Yutongs [chines buses] (working or not) in some official parking lot and due to the indolence of some official. That indolence can also be incompetence, and both are also a form of blockade. Many studied and were cultivated in the solve little with a lot, but today the formula is reversed; It is not a matter of individuals, it is cultural.

Others say that our problem is not the blockade but the broken companies because of the nationalizations. One wonders why the United States is not like us when in 2017 it lost 60 thousand companies and 5 million jobs.

She is still happy when I make a surprise arepa in the morning or if a biscuit with coffee appears on her desk in the middle of the afternoon, in the midst of the bustle and the mess that means facing the job. For the kids, the sport is their air space to dream, they rediscover themselves, with the doing and the building of the spirit and the affections. At school, as at home, we manage to breathe love to this land that we refuse to renounce.

There is not much to theorize when friends give you a ride and accompany you to look for not so expensive prices, when you buy collectively, you exchange and propose alternatives. There is not much that “self-criticize others” when the CLAP arrives on time because the neighbors that organize it are kept awake for it to be so.

Of what we eat to face the war, I do not write much, it will not be that someone in Miami is reading me and give the order to hide it or “bachaquearlo” [black market sale]. I will only say that there is no better anxiolytic than some fried plantain … There is no sadness, what remains is a continuous surprise at the ability to hate that these people have.

Ours is not about showing how we endure this war to be admired, much less lamenting in a labyrinth of weeping and complaining giving pity and guilt. What we do decide each night is to rest, to breathe this air without gunpowder so that tomorrow, if the war subsides, the fight remains.