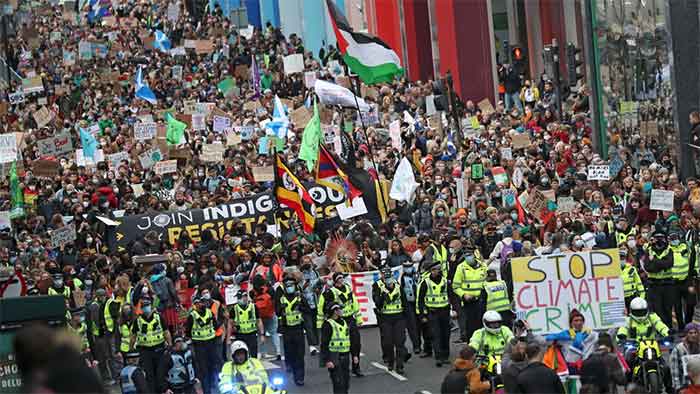 Of all the speeches and political grandstanding at the 2021 United Nations Climate Change Conference in Glasgow (COP26), the words of Mexican President, Andres Manuel Lopez Obrador, were the most profound and least hypocritical.

Lopez Obrador raged against the “technocrats and neoliberals” – world leaders who hold the future of humanity in their hands. This was a direct reference to leaders of the powerful countries that “increase their fuel production, at the same time that they hold summits for the protection of the environment,” while arriving in Glasgow on private jets.

Indeed, hypocrisy continues to define what is meant to be a collective global fight against climate change and its ravaging, often deadly consequences.

Over-consumption, inequality and unchecked capitalism were hardly the defining keywords at the COP26. Such references were largely made by “radical” and “leftist” environmentalists outside the conference halls. Pointing out the obvious has sadly become a radical act.

Inside the posh summit halls, it was politics as usual, though concealed as virtuous concern for the fate of all humankind.

“It’s one minute to midnight on that doomsday clock and we need to act now,” British Prime Minister Boris Johnson said, using a forceful and dramatic tone. He himself had admitted to the futility of past exercises of a similar rhetoric of the past. “I was there inParis six years ago when we agreed to net zero (emissions) and all those promises will be nothing but blah, blah, blah.”

For his part, French President Emmanuel Macron lashed out at the “big emitters, whose national strategies are not in line with our 1.5°C objectives”, stating that “too many of us make commitments here and then sign trade agreements that do exactly the opposite”.

These leaders were not the exception. But others, the likes of US President Joe Biden, lashed out at specific countries, particularly the US’ global competitors in trade and political influence. His style of speech was distinctly different from Johnson’s and Macron’s. “The fact that China, trying to assert, understandably, a new role in the world as a world leader, not showing up? Come on!”, he said, following that with a jab against “Putin and Russia.” That is, in itself, a sad commentary; Biden had traveled thousands of miles merely to settle some trivial political scores.

Such futile political rhetoric accentuates our current dichotomy as we face the repercussions of our own abuse of the environment. On the one hand, we do need leaders who are capable of appreciating the gravity of the situation while, on the other hand, international politics has often proven to be the cause of problems and rarely the solutions.

So, how do we resolve this riddle?

That is definitely the starting point of a serious conversation on the environment. The self-serving logic of politicians and billionaires can only make us sink deeper in the unrelenting quagmire.

Amazon founder, Jeff Bezos who also arrived at the summit on his private jet, pledged to invest $2 billion for climate change by 2030, after receiving an “epiphany” during his 10-minute space ‘expedition’ “I was told that seeing the Earth from space changes the lens through which you see the world. But I was not prepared for how much that would be true,” he said in his speech.

Of course, for the likes of Bezos, such generous offers are quite beneficial. It further contributes to their successful business brands, while deflecting criticism that capitalism, limitless consumerism—thus incalculable, often undeserved amassing of wealth – have pushed our environment to the point of desperation.

However, can the people who have originated the problem be the very individuals who fix it, without even acknowledging their role in the crisis in the first place? Never.

RELATED CONTENT: As Chávez Said, ‘Let’s not Change the Climate, Let’s Change the System!’: A Conversation with Max Ajl

“Enough hypocrisy and fad,” Lopez Obrador said, before attending the Glasgow summit. The Mexican leader, often dubbed as ‘populist’ by the likes of the Economist, Reutersand others, has pointed precisely to the ailment that resulted in the current environmental impasse. “We must fight the massive monstrous inequality that exists in the world,” he said.

The truth is this: the answer to the intensifying growing environmental crisis lies in our own hands, not those of politicians. The latter will only act if we raise our collective voice and pressure them to do so.

According to the latest report issued last August by the Intergovernmental Panel on Climate Change (IPCC), “human influence has warmed the climate at a rate that is unprecedented in at least the last 2,000 years.” All the fiery speeches, fancy summits and numerous political pledges have done very little to reverse this dismal and worsening trajectory.

Expecting COP26 to save the world is wishful thinking. Our fate is truly in our own hands. It always has been. It is high time for politicians to stop talking and, for once, truly listen.