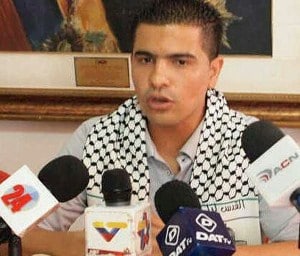 RL: How, when and why did the Revolutionary Current Bolívar and Zamora emerge?

The CRBZ came through a process of the accumulation of force; we are a people made movement. The Current is the sum of the people converted into a collective. Our Current started in the 1980’s when the Massacre of Cantaura, the Massacre of Yumare, and the Massacre of the Amparo happened. The 80’s were characterized by the exhaustion of bourgeois democracy in Venezuela and a wave of repression against the people as a result of the application of a package of neoliberal economic measures by the government of Carlos Andres Perez.

The Venezuelan people took to the streets against the measures, it was known as the Caracazo. The government unable to control the situation used the repressive bodies of the State, consummating a great massacre of the people. At that time Venezuelan left was in a complex situation and on the international stage, the socialist camp by virtue of all the internal and external conspiracies was in an accelerated stage of retreat. It was in this framework that a group of men and women with acquired experience in the revolutionary struggle decided to unite and begin a projected march in the consolidation of an alternative project that today bears the name CRBZ.

We began with neighborhood work, with the defense of human rights, we worked with peasants for the democratization of the land and the agrarian revolution, and we worked with university students, with workers, with women and youth. Over the course of time we entered the second phase with a strategic vision and the construction of the social fronts in the peasant, communal and working class areas, as well as defining an organic policy of study. Later the national school of Mariscal Sucre was born; all this was aimed at the socialist and alternative popular power in the framework of the Bolivarian revolution. As this project developed in 2009 the CRBZ was born and at present we are in a process of adaptation and updating in what we have defined as the new transforming perspective.

RL: How do you evaluate the current situation in Venezuela?

Our country is currently being subjected to a systematic and continuous siege, interference and attacks carried out by U.S. imperialism. This really began the moment we decided as a people to build a revolution. The U.S. government has now issued 7 decrees that have become economic sanctions that threaten the lives of the Venezuelan population. These unilateral sanctions violate international law and translate into a war crime and a crime against humanity by preventing our people from even acquiring medicines and food.

RL: How is the CRBZ organized to resist the current situation?

The CRBZ is an organization that has a presence at the national level; we are in a process of adaptation to the new cycle in which the revolutionary process has entered. We are organizing ourselves in the Popular Defense Brigades (BDP) Hugo Chavez, in the communes expanding the participation of the people and promoting our own production.

We are part of building a great national productive alliance that allows development in an organic way amongst the small and medium producer along with a productive business sector that places the interests of the nation ahead of profit.

We walk in the construction project of the country defined in the constitution and the plan of the homeland. We are calling on all the working people to unite efforts in all the territories to build the popular network of solidarity aid that allows reciprocal help among the people in our communities; today more than ever a new transformative perspective is in force that allows us to accumulate strength to move from resistance to a revolutionary offensive.

RL: How did the Popular Defense Brigades (BDP) Hugo Chavez emerge and how do you evaluate their performance?

The BDP arose because the country is being subjected to an inclement economic, psychological, cybernetic, political and military attack, which we could say is a hybrid war. This implies the presence of elements and actions of a new type, therefore we must employ and practice new methods in our popular defense. We must take as a reference for action the territories; whether they are the city, the countryside or the commune where the fascist violence of the guarimba has generated terror and seeks to immobilize Chavismo. The brigades bear the name of our Commander Hugo Chávez, promoter and creator of the Bolivarian Revolution. We dedicate our efforts to defend his legacy, to defend our accomplishments and fight for what is lacking.

The BDP Hugo Chávez is organized in assemblies of citizens expressed in the base of chavismo and has their foundation in the Constitution of the Bolivarian Republic of Venezuela, in Article 326. “The security of the Nation is based on the co-responsibility between the State and the civil society… The principle of the co-responsibility is exercised on the economic, social, political, cultural, geographic, environmental and military scopes”. It is the reason why constitutionally the people have the right to participate in the defense of our sovereignty.”

The Brigades are in a process of expansion and growth at a national level in which the revolutionary and patriotic forces that are in a specific territory and they have played an important role in the security and defense, as well as in the establishment of the culture of peace with social justice and the defense of the constitution of the republic.

RL: Could you give me your opinion on the functioning of the communes? What could be done to improve them?

A great challenge for the communes is the construction of the communal state in the midst of imperialist aggression and the economic blockade. For this it is vital to move from the formal commune to the real commune that has political and economic power, that is, to build the spirit of the commune. It is the struggle between the old and the new. The commune must build the democracy of the people where the great majorities are those who participate and make decisions, just as it is necessary to organize, develop and expand the productive forces, it must be a dialectical unity participation, production and defense in order to fully materialize the popular sovereignty that leads to the construction of the new socialist communal state.

In the present situation, updating the model and communal work in the face of imperial aggression and the internal contradictions of the revolution is vital; the commune plays a fundamental role in transcending the current state of affairs.

RL: What other response could be given to the onslaught of imperialism against Venezuela?

Imperialism has entered a new cycle, from siege to direct aggression, to assault, in the face of the lack of a democratic opposition which has lost influence in the field of ideas among the masses and by virtue of that fact that they cannot overthrow the revolution through the ballot box, they have decided to take a leap forward in their aggression.

A great battle that we must fight every day is to defeat the lies expressed in the communicational and propaganda campaign, the reactivation and development of the productive forces, and to build solidarity on a planetary basis that sways public opinion against the war and the economic blockade imposed unilaterally against Venezuela. The unity and permanent mobilization both in the country and at the international level is transcendental.

RL: How does the CRBZ evaluate the Sao Paulo Forum?

The Forum for us as an organization represents a strategic space where the nationalist, progressive and revolutionary forces of the American continent converge and where organizations from other continents also can participate. Today America as a region is going through a political, social and economic struggle in which there are two models in confrontation, capitalism and the project of the anti-capitalist, anti-colonial and socialist in our case. Venezuela is now at the center of this historical dispute and is the objective to be defeated by imperialism. This view allows us to say that the forum of Sao Paulo is important because it allows us to build the diplomacy of the peoples in order to break the brutal siege and blockade being imposed by the U.S. government. We are encouraged that the

Forum provides a space where social movements and political parties can deepen the agenda of alliance building among all the organizational expressions that beats the drums of peace against the drums of war which is the tune played daily by the White House and the Pentagon.

RL: The Barinas Massacre took place during the Forum, Who is behind the crime? What has been done to punish the guilty?

The massacre of 6 “compañeros” of the CRBZ and the Popular Defense Brigades (BDP) occurred while the Forum was taking place. On July 27 at 10.30 am on the Ticoporo reserve of the Sucre municipality in the State of Barinas. The massacre was carried out by an armed group, presumably paid mercenaries and linked to the right wing landowner of the area. The operation was carried out by a team with military training, presumably made up of Colombian paramilitaries, former Venezuelan police officers and organized crime linked to drug trafficking from Plan Colombia. These actions are framed within the war against the homeland and its people that are articulated in the plan of imperialism, the Venezuelan bourgeoisie and the Colombian bourgeoisie.

The CRBZ and the BDP – Hugo Chavez have requested a quick and thorough investigation to this crime and for the punishment of those materially and intellectually responsible for this vile massacre. Today we can say that the investigations are proceeding in a positive way. This is the product of the commitment and the will of the national leadership of the PSUV, of the national government with the people, with the constitution and the legal framework in force; as well as the mobilizations, media actions, national and international solidarity.