After the 2016 election, many journalists (e.g., New York Times, 3/27/16) lamented their role in elevating Donald Trump to victory by handing him billions of dollars of free publicity, in exchange for the ratings and clicks his outrageous rhetoric and behavior generated for them. And yet they will never learn their lesson: Despite weeks of open discussion about Donald Trump’s daily briefings serving as little more than campaign rallies full of harmful misinformation, television networks continue to broadcast them live (now with some cut-aways and factchecking), and some reporters continue to cover the tension as just another partisan battle with no clear right or wrong.

For weeks now, Trump has been seizing on the Covid-19 crisis gripping the nation and the world as an opportunity to snag free air time. The primetime briefings have been a campaign bonanza for Trump: Democratic nominee-apparent Joe Biden had 13 media appearances from March 14–28, according to his campaign (The Hill, 4/3/20), reaching a total of some 20 million people. Trump’s briefings during that time had an average daily audience of 8.5 million (New York Times, 3/25/20)—and that’s not even counting his other media appearances.

RELATED CONTENT: Trump’s Precipitous Collapse in the Polls is Tied to the Coronavirus “Chaos” he is Creating 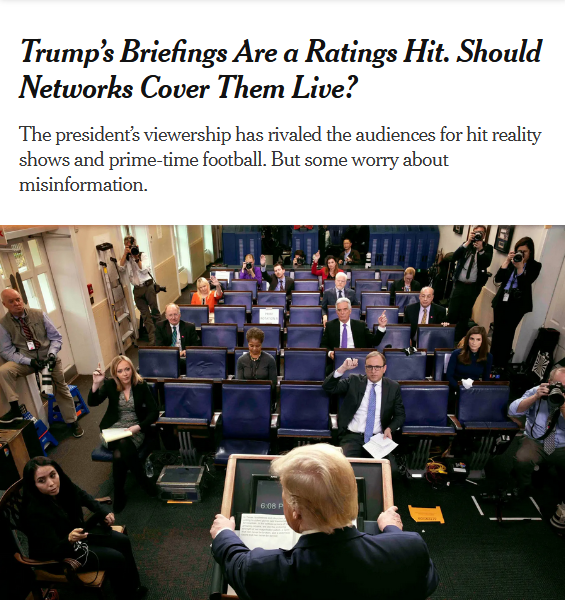 Airing the president’s briefings about an unprecedented crisis at first made sense, but it very quickly became apparent to some of the more clear-headed observers that Trump’s errors, lies and self-aggrandizement were not, in fact, newsworthy. Pundits like Margaret Sullivan (Washington Post, 3/21/20), Rachel Maddow (MSNBC, 3/20/20) and James Fallows (Atlantic, 3/20/20) began calling for networks to stop airing the briefings live, while others clung to the fantasy that limiting Trump’s airtime would be “censorship” (Chicago Tribune, 3/30/20; see FAIR.org, 3/31/20).

But move away from the opinion columns, and too many journalists have fallen back on the safety of “balance.” A New York Times piece (3/25/20) about the coverage offered a perfectly Timesian on-the-one-hand-on-the-other headline: “Trump’s Briefings Are a Ratings Hit. Should Networks Cover Them Live?,” followed by the subhead: “The president’s viewership has rivaled the audiences for hit reality shows and prime-time football. But some worry about misinformation.”

At the Washington Post (4/10/20), Amber Phillips even went so far as to give readers a pros and cons list of whether Trump should continue his briefings. (The first pro: “It’s a way for him to project that he’s in control of the crisis.”)

Time‘s Tessa Berenson (3/30/20) gave a master class in how not to cover a journalistic dilemma, under the headline, “‘He’s Walking the Tightrope.’ How Donald Trump Is Getting Out His Message on Coronavirus.” Berenson wrote that the briefings, which she acknowledged “have become his new rallies,” appear to have given Trump a polling boost.

She explained: “Some experts say that’s because Trump has found the right balance between the competing demands of the public health crisis and a spiraling economy.” Which experts, exactly? Republican pollster Frank Luntz, who told Berenson, “He’s walking the tightrope, but so far so good.” And, later, Matt Benyon, identified as “a former communications adviser to Rick Santorum’s presidential campaigns.” Note that part of how Trump is getting out his message is by Time letting a Republican spin doctor write its headlines. 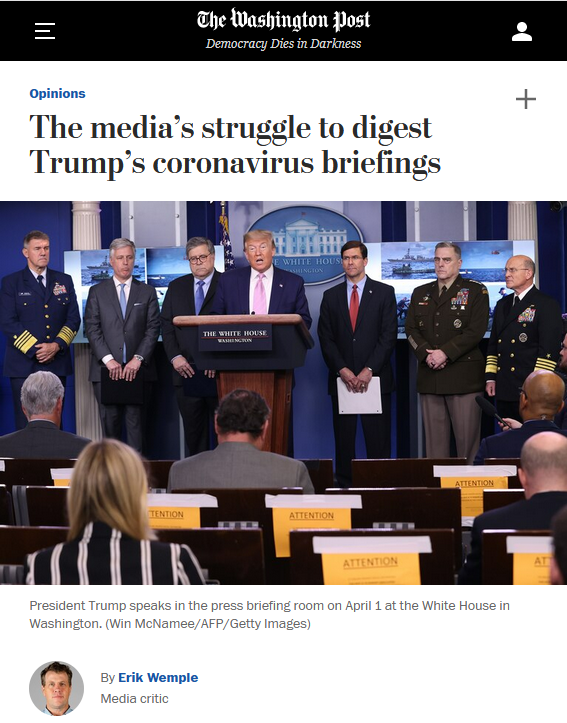 CNN and MSNBC have seemed to settle on a policy of airing the briefings, but cutting away at times from Trump’s monologues, and to offer some after-the-fact factchecking. But there is no reason—other than a desire for ratings, or a seriously misguided understanding of what journalism is—to continue to give Trump airtime for his briefings, factchecked or not. Not every presidential utterance is inherently newsworthy; naturally the actions of the powerful have impact, but reporters can cover that impact without handing Trump the mic.

As the Washington Post‘s Erik Wemple (4/8/20) pointed out, factcheckers can’t possibly keep up with unspinning all the lies and distortions Trump disgorges in his typically lengthy briefings; as Politifact‘s editor told Wemple, if they tried to do that, they wouldn’t be able to factcheck anything else.

Yet Wemple draws from this an impossible conclusion: “The only response is to work harder.”

The real response here ought to be clear: If the powerful are spreading life-threatening lies, do not freely give them a huge platform to reach more people with those lies. By offering Trump live airtime for his coronavirus briefings-cum-campaign rallies (and by covering that decision with a shrug), media repeat the same mistakes of election 2016—with even more harmful consequences.