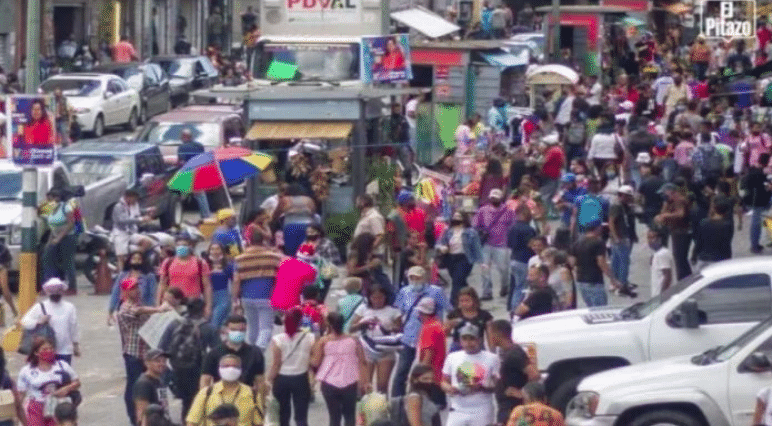 This Thursday the President of Venezuela, Nicolás Maduro, warned Venezuelans about big crowds of people in the streets due to the relaxation of the quarantine during the month of December, and the absence of facemasks, which are supposed to be worn as part of the Christmas reopening measures.

Maduro said this during a meeting with deputies from the Capital District, Miranda and Vargas elected to the National Assembly (AN) for the Great Patriotic Simón Bolívar Pole (GPPSB). During his speech, the Head of State expressed his concern about the indifference of some Venezuelans in the face of the invisible threat posed by the novel coronavirus. During a tour of the center of Caracas, he noticed “thousands, thousands of people in the streets; they tell me that in the interior of the country it’s the same.”

In this sense, President Maduro pointed out that the Venezuelan State has digitized the monitoring of banking operations carried out in the country, to monitor commercial movements in this month of reopening.

To illustrate his point, the president presented to the cameras some photographs taken in the vicinity of the Cruz Verde market on Bolívar Avenue in Caracas, where a large number of people can be seen without masks, or wearing them incorrectly.

“Cilia always tells me ‘don’t get so upset’ when we go down the street because what I would love to do is to get out of the car and ask them if they’re trying to commit suicide. There is a coronavirus pandemic, you have to take care,” said Maduro, also pointing out high concentrations of people in Plaza Venezuela and the Paseo Los Ilustres in the capital city.

Featured image: In Caracas, in the first days of December: queues, hustle and bustle, and crowds in commercial areas returned. Photo: Rubén Rodríguez