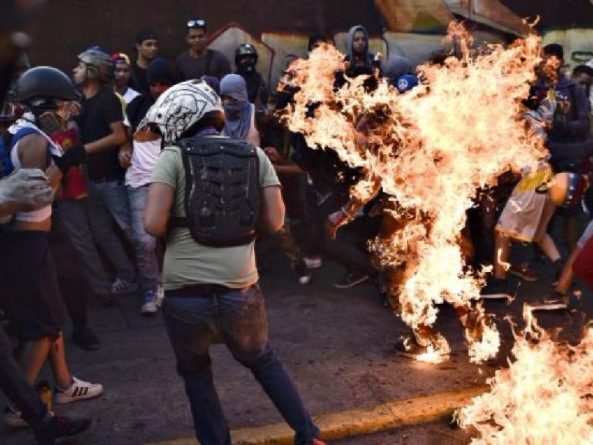 I believe I am not mistaken if I affirm that Chavismo is a rather silent subject. There will be exceptions, of course, but I think it is distinguished by a certain self-control, a certain caution that allows it to succeed in the most compromised situations, slip away, land on its feet, to preserve integrity not only physical, but spiritual. Rarely will it be seen vociferous in a public office, at the store, at the kiosk on the corner, in the queue of the bank, in the elevator, during a family celebration, at a meeting of friends.

I recognize that the silence can lend itself to misinterpretations: it is not that it prefers to be silent in the face of injustice or to remain impassive in the face of offense. Much less is it a matter of having nothing to say or that it feels ashamed for what it is, feels and thinks. The moment arriving, it speaks, loud and clear, and if that is the case, acts.

Accustomed to dealing with adversity, being despised, ignored, invisible, it didn’t have to work very hard to adapt to a hostile political environment.

If one had to use an expression that refers to the way in which many problems are usually solved in school and high school, Chavismo has much to expect from a historic little ambush.

It is not that it shies away from problems, it’s that it is so accustomed to them that it has learned to distinguish the opportune moment or to find the appropriate, fairer, more intelligent way to solve them.

In its environment, in the “barrio”, lets say, or in the countryside, knowing itself to be the majority, or simply free of danger, it can engage in long discussions with its adversaries, always sprinkled with humor, whether the most divine or the most profane, with preference for the latter.

In circumstances of extreme hostility, when, at a clear disadvantage, it senses that aggression is imminent, it feels fear, like anyone else, and can pretend to be what it is not, to try to go unnoticed. But it can also happen, as it did to Orlando Figuera, who knowing himself lost, condemned to death, opted to accept his fate: “… answering them or not, they would kill me. I said yes. I’m a Chavista, what’s the problem”(1), he told her mother shortly before he died. At the most, his assassins will have interpreted those words as a confession full of resignation, as proof of his guilt, and not as what it really was: a reaffirmation of his dignity, impossible for his killers to take in.

The apostate, on the other hand, feels an urgent need, ineluctable, to vociferate his disenchantment. Faced with the difficult trance of justifying his shameful claudication, he declares himself ashamed of his past, and he does not lose the opportunity to declare how betrayed, how deceived he feels. Someone, once, abused his trust or took advantage of his ingenuity or mocked his dreams, and he is no longer willing to allow it, he says.

But if the one who betrayed, cheated, abused, took advantage of or made fun of, deserves all the blame, nobody seems more despicable to him than one who remains faithful to his principles, to his convictions, and continues to fight. He accuses them as mediocrities, apologists, blind, privileged, accomplices.

The vociferous attitude of the apostates pursues an additional purpose: to be accepted by the environment that previously harassed them, considering them strange, monstrous, uncivilized, ignorant, insane. To scream out loud is a way of showing that he has been rectified, that the course has been corrected, that reason has been entered into. Sadly, this does not always work: whoever has made hostility a way of doing politics will not stop demanding one and another declaration of new faith. For apostates, the past is a condemnation, it is like a curse that persues them, forcing them to vociferate the worst things, louder and stronger, entering a vicious circle that seems to have no end.

It is not by chance, the multiplication of apostates in recent times. “The Shock Doctrine” (2), by Naomi Klein, abounds in details about the effects produced by economic, political or social shock measures, characteristics of what she calls “disaster capitalism”. Klein exposes the sinister relationship between the methods of torture used by the US government and these shock measures. The objective is to make a clean slate, either in the body and mind of the tortured, or in societies, to create a new personality or to make acceptable, even desirable, the most brutal and inhuman forms of capitalism.

Of course, there is nothing of creative power in torture, but pure destructive power. A destruction that, eventually, makes the tortured abandon his own personality. In the case of societies, economic, political and social torture has as one of its objectives to destroy historical memory, to elicit in human groups disorientation, terror, submission.

Concerning the aggressions of the US government against Venezuelan society, Alfred-Maurice de Zayas affirmed: “The sanctions and the economic blockades of our days can be compared with the sieges of the cities in the Middle Ages with the intention of forcing them to surrender. The sanctions of the 21st century try to bring to their knees not only one city but sovereign countries (3). More recently, stated Idriss Jazairy: “It is difficult to imagine how the measures that will have the effect of destroying the Venezuelan economy and preventing Venezuelans from sending money home can be said to be aimed at helping the Venezuelan people” (4).

With the sanctions, Venezuela is being literally subjected to torture, among other reasons so that, overwhelmed by extreme circumstances, the Venezuelan people renege on their political identity. Such a thing has not happened.

Apostates by mere political inconsequence come to join apostates as a result of the inhumane siege against the population. But the Chavista political identity remains standing.

We must know how to distinguish between this phenomenon of apostasy and popular unrest, even political disaffiliation. The difficulty is understandable: the vociferous make a lot of noise. But we must learn to listen to the popular underground, quasi-silent rumor, which tells us about the errors and miseries of officials and leaders, but also of their successes, of Chavez, of his will not to give up definitively everything built during the Bolivarian Revolution.

You may decide to withdraw, stay on the sidelines; You may even find reasons to no longer feel identified with Chavismo. But that is one thing, and quite another is to commit a political suicide.

(2) Naomi Klein. The doctrine of shock. The rise of disaster capitalism. Paidós Ibérica. 2007

(3) United Nations. Report of the Independent Expert on the promotion of a democratic and equitable international order about his mission to the Bolivarian Republic of Venezuela and to Ecuador . September 2018.