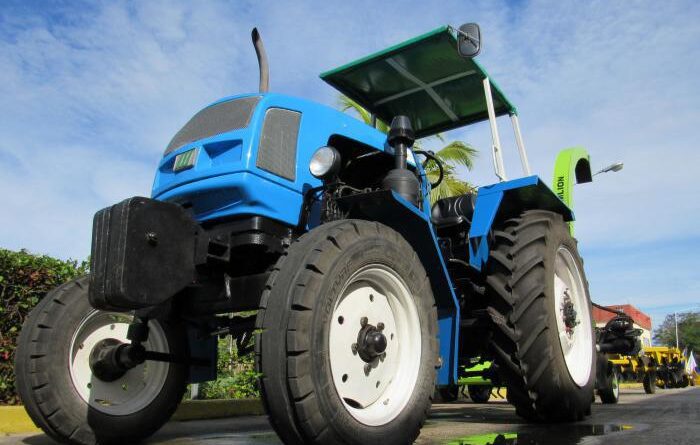 An 80-horsepower rear traction tractor designed to carry out plowing, cultivation, fertilization and transport, with 30% of components made in Cuba

HOLGUIN, CUBA ­– President Miguel Díaz-Canel proposed the challenge during the last government visit to the province. At that time, while talking with executives at the Héroes del 26 de Julio Mechanical Company (HOLMECA) in Holguín, he asked them: “If you design and manufacture harvesters, why don’t you manufacture tractors?”

This is how the prototype of Magric 80.2 was created. A tractor with an output of 80 horsepower (hp) and rear traction designed to carry out tasks such as plowing, cultivation, fertilization and transport.

Juan Carlos Pargas, director of the 26 de Julio Agricultural Implement Enterprise Unit, where the equipment was assembled, explains that they took advantage of the experience acquired from the reconstruction of YUMZ tractors in the 1990s and the availability of resources related to the manufacture of harvesters. On hand, in inventories, they had the engine, the transmission box and other aggregates. With the technological scheme at hand, all they had to do was work.

“This machine was assembled based on our technological possibilities. This is why 30% of the components were manufactured in Cuba. We made the chassis, cabin, front wheels, directional bridge, the lifting and towing system of implements, pedals and other elements”.

Once the equipment is validated, which is expected to happen at the mass production stage, more pieces manufactured in the country could appear, explains the expert. For him, the noticeable technological aging of the country’s metallurgical industry and other sectors must be mitigated with a greater display of creativity, optimal use of available equipment and productive linkages.

Aware of the scenario in which he operates, he noted that the country’s industry has the possibility of manufacturing part of the transmission gears and the hulls of the box where these elements fit together.

One of the actors that can contribute to this new design is the Oleohydraulics Enterprise in Cienfuegos. “It can provide pistons and other pieces for the hydraulic systems,” he said.

The Magric 80.2 will be tested soon in fields in the province of Granma. The Agricultural Engineering Research Institute will carry out the evaluation, explains engineer Rubier Luaces Ledea, technical director of Holmeca.

Engineer Julio César Gallego Torres, deputy director of the entity, recalls that the tradition of manufacturing self-propelled agricultural machines dates back to 1996, when in cooperation with a foreign company they produced rice harvesters that were later acquired by the Ministry of Agriculture, which distributed them to production centers across the country.

He insisted the enterprise has a strong point in the harvesters as part of their catalogue of automotive agricultural equipment. The equipment is an intermediate means of transport between the rice harvesters and the vehicles that wait next to the fields to take the rice to the processing centers.

It is a product that is made exclusively in Cuba as its base is a tractor that has been transformed into a machine with new features such as continuous tracks, a loading tank and a system for filling and emptying, among other elements.

The production logs of the 26 de Julio Enterprise Unit show that during 2012, thirty units with a capacity of seventy quintals each were manufactured. In 2018, they assembled another large batch of machines that, as confirmed to Granma by lead designer, engineer Dionis Reyes Camejo, were superior to the previous models, with a new cabin and hydraulic devices that provided greater speed to the unloading module, thus reducing the time of operation.

With functions similar to those of the harvesters, the company delivered to the Ministry of Agriculture ten transporters with a capacity of 140 quintals each last year, after being assembled with a high percentage of components from China. The equipment was designed by specialists from the Agricultural Machinery Development Center (CEDEMA), and the prototype was manufactured in China, in an industrial entity that maintains mutually beneficial relations with the company.

RELATED CONTENT: Cuba Under the Dominance of the Dollar?

Currently, the enterprise is working with the intention of offering a self-propelled machine to harvest corn and other grains. Among the many remarkable elements of the process, the concept of integration stands out, which begins in the research phase, for which they took reference from a model created by a firm with long experience in the manufacture of agricultural machinery.

HOLMECA created a Design Room at the workshop in the 26 de Julio Enterprise Unit, where in-house specialists and specialists from ten other companies and research centers from the entire country work together to obtain the sets or parts that the equipment will contain.

CEDEMA’s engineer Yadnel Abreu Ricardo coordinates the work of the group. The design includes technological elements that can be produced by national industries, with real availability of raw material necessary to manufacture the numerous parts of the machine, using a minimum of imported resources, he explained.

“As we work by stages, we support each other. This is the way to make the project’s chaining a reality, by following the principle of simultaneous design and fabrication, so the harvester will be available in the shortest time possible.”

HOLMECA’s interest in the creation and promotion of self-propelled agricultural equipment can also be seen in four other projects for the development of means and implements for soil preparation and the harvesting of agricultural products in general.

The group is committed to promoting the sugar industry’s Bioelectric Power Program, working on a subsoiler with several parts, twenty-eight-disc harrows and equipment for compost preparation, ditching and fertilizing. This equipment seeks to increase the yields of cane plantations that provide the biomass that serves as fuel after the sugar juice have been extracted.

For livestock ranching, where there has been a gradual incorporation of domestically made components, they propose to manufacture a family of products composed, among other elements, of sowing and grass mowing machines and hay baler. These are developed in cooperation with CEDEMA and built in China with the collaboration of Zoomlion Company, after including the modifications for their use in Cuban fields. In this case, the grass silo harvester destined for fodder in direct cut of grass, corn, sorghum and other plants for cattle feed stands out.

Regarding the rice program, the goal is to meet the needs of producers demanding technical equipment, some capable of replacing the work carried out by agricultural aviation. This group of implements includes sowing-fertilizing machines, a fertilizer spreader, a flattening blade and a roller to compact the soil.

In the dynamic search for solutions, through the use of all available untapped resources, the manufacture of electric motors has also been recovered at the Enterprise Unit specialized in this area. They favor a single-phase, 220 v at 3.0 kw, a possible option to replace inoperative motors in Pluss 2000 fodder machines, imported by the agriculture system. Having this type of engine in hand is very important when manufacturing of these machines begins in Cuba.

These efforts are part of the great challenge that Cuban President Miguel Díaz-Canel presented to the metallurgical industry to expand their product portfolio and significantly replace or reduce imports, looking for new things to do and how to do them without neglecting investment where needed to ensure the process.

Featured image: Only a prototype today, Magric 80.2 will become a serial product designed with a high percentage of Cuban components and manufactured in a productive chain including several industries. Photo: Germán Veloz Placencia