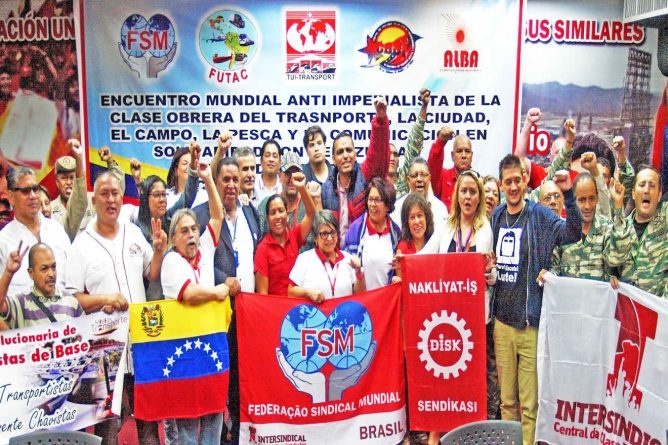 On June 1 and 2, more than 26 workers’ delegations from the transport, field and fishing sectors of several countries gathered in the Bolivarian Republic of Venezuela to express their solidarity with the Government of President Nicolás Maduro and the Venezuelan people, against the siege and the criminal and illegal blockade of the United States against the nation. In the first International Anti-Imperialist Meeting of the Transport, Field and Fishing Working Class, it was agreed to create a block of support from the peoples and unions of the world to Venezuela, a formation of communication guerrillas, to bring the truth of what happens in our country and dismantle the lies spread by the transnationals of communication, with the active participation of Venezuelan workers in defense of the homeland in civic-military union.

Below you have the full Declaration:

DECLARATION OF CARACAS
“INTERNATIONAL ANTI-IMPERIALIST MEETING OF THE WORKING CLASS OF TRANSPORTATION, FISHING AND COMMUNICATION IN SOLIDARITY WITH VENEZUELA AND THE PRESIDENT OBRERO NICOLÁS MADURO MOROS
Caracas-Venezuela, from May 31 to June 2, 2019

In homage to Simón Bolívar, José Martí, Sandino, Salvador Allende, Fidel Castro and Hugo Rafael Chávez Frías, some of the most notable anti-imperialist fighters of Latin America and the Caribbean, have been summoned to meet in Caracas, birthplace of the father of the Fatherland, Simón Bolívar, constituting us as a working group for political debate, with the purpose of ratifying our solidarity with the Bolivarian Republic of Venezuela and the worker president NICOLÁS MADURO MOROS, BEFORE the US Government INTROMISSION, THREATS AND AGGRESSIONS, the OAS and the European Parliament, as well as groups of governments of the fascist right ruling countries, kneeling before the North American Empire.

There are clear actions directed through planned and systematic attempts to DEFEAT THE LEGITIMATE GOVERNMENT OF NICOLAS MADURO, WHO WAS DEMOCRATICALLY ELECTED BY THE VENEZUELAN PEOPLE ON 20 MAY 2018, IN FREE AND SOVEREIGN ELECTIONS, AS WELL AS TO APPROPRIATE OUR RESOURCES AND OUR NATURAL RICHES, infamous intentions also to steal our Venezuelan companies abroad, as happened with CITGO, and the accounts of the Venezuelan state that add up to approximately 30,000 billion dollars, funds belonging to Venezuelans, INTERNATIONAL RESERVES and FINANCIAL resources destined to the acquisition abroad of supplies for health, industry, food and in general for. the support and development of Venezuela, trying to intimidate or destroy a FREE AND PEACEFUL PEOPLE OF LATIN AMERICA, THROUGH THEIR MILITARY POWER in order to impose the supremacist Monroe doctrine (America for Americans).

Presidents, workers and workers representing national Centrals, Federations and Trade Unions, as well as Bolivarian movements of transport, fishing, communication, construction, banking, port, chemical, oil, railroad workers from the United Kingdom, Turkey, France, Brazil, Panama, Venezuela and the written contest, Cuba, Portugal, Spain, Nigeria, Syria, Republic of the Congo, Russia, Nicaragua, Uruguay, USA, Mexico, Colombia, Peru, Chile, Ecuador, Bolivia and Argentina, the National Constituent Assembly (ANC) represented by the Constituent HUMBERTO CLARK, the Constituent GLEIMAN VANEGAS, for the Workers’ Staff of the Bolivarian National Militia 1Tte JOSE BRICEÑO; in whose names testimonials and endorsements have been received, to the agreements and declarations that are derived from the meeting product of the working tables, whose thematic axes revolved around the

DECLARE FROM HEREON IN PERMANENT MOBILIZATION AND ACTION AT THE INTERNATIONAL LEVEL WITH THE WFTU IN EUROPE, MIDDLE EAST, AFRICA, NORTH AMERICA, LATIN AMERICA AND THE CARIBBEAN IN ORDER TO CREATE A COMMUNICATIONAL STRUCTURE TO DISSEMINATE THE TRUTHS ABOUT THE BIG HOMELAND, AND SPECIFICALLY THE CASE OF VENEZUELA.

WE CONSTITUTE OURSELVES IN A TRUE STRENGTH OF INTERNATIONAL SOLIDARITY TO FACE THE MEDIA “CANALLA” OF TRANSNATIONAL COMMUNICATIONS THAT TRANSMIT LIES AND LIES TO JUSTIFY ITS INTERVENTIONS, ECONOMIC BLOCKADES AND TO IMPOSE DEATH, OPPRESSION AND DEHABILITATION ON PROGRESSIVE PEOPLES THROUGH WAR.

Having listened to the TESTIMONIES of the international delegations present and the recognition of the national leadership,

In many countries of the world, REVOLUTION is now inevitable. That fact is not determined by the will of ANYONE because it is determined by the appalling conditions of exploitation in which the peoples live on our BELOVED MOTHER EARTH, the development of the REVOLUTIONARY consciousness of the masses, the WORLD CRISIS OF IMPERIALISM and the UNIVERSAL movement of the struggle of the subjugated PEOPLE …! It is important that we do not lose sight of the magnificent reflections of our most BELOVED FATHER SIMÓN BOLÍVAR:

…. “The Freedom of the world is dependent on the health of America.”

Long Live the Fight of the International Working Class of Transport, Communication and Fisheries.

Viva France, Viva Turkey, Viva Panama, Viva Inglaterra and all those who have expressed solidarity with Venezuela.

LONG LIFE TO THE HEROIC VENEZUELA OF BOLÍVAR, CHAVEZ AND
MADURO.
International responsibles: