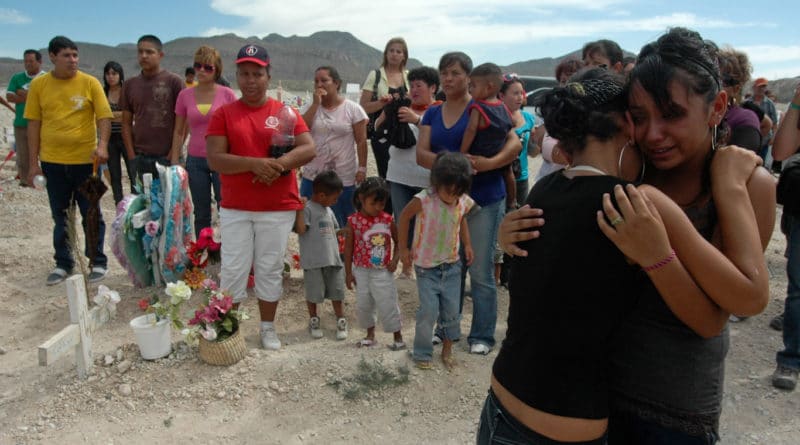 The Supreme Court set a dangerous precedent yesterday when it ruled in favor of the US Border Patrol in the cross-border murder of a young teenage boy who was shot in the face by an overzealous agent.

June 2010, 15-year old Sergio Hernandez was playing a game with his friends in Ciudad Juarez, Mexico when a U.S. Border Patrol officer Jesus Mesa shot him in the face, killing him instantly. Mesa fired from El Paso, Texas on the American side of the border into Mexico. In court, he claimed that the teenage boy had attacked him, pelting him with stones, and he feared for his life. Video footage of the incident, however, clearly contradicted his account. Mesa had caught one of Hernandez’s friends, and while apprehending him, shot Hernandez twice as he ran away.

Yesterday the Supreme Court ruled that the deceased child’s family could not sue the U.S. for damages, effectively setting a precedent that American officials can kill with impunity. The investigation ruled that Mesa had indeed acted in self-defense when he fired through the militarized U.S.-Mexico border. Like many Supreme Court rulings, the decision was split down liberal-conservative lines, with new Trump appointees Neil Gorsuch and Brett Kavanaugh carrying the day 5-4. The court decided that the teenagers’ games along the border represented a national security threat to the United States and that because Mesa fired from one country into another, it was an international incident and beyond its purview. The more liberal judges – Ruth Bader Ginsburg, Justices Stephen Breyer, Sonia Sotomayor and Elena Kagan – rejected this framing and offered a dissenting opinion. Nevertheless, the majority decision sets a precedent that police, ICE agents and other border security forces could use in the future.

As suggested by the 5-4 ruling, the result was a controversial one and not welcomed by all. The Mexican government expressed its “deep concerns about the effects this decision will have on other similar cases, in which Mexican citizens have died from gunshots fired by US agents towards the Mexican side.” Hernandez’s legal team voiced their dismay at the ruling, which effectively ends the family’s ten-year struggle for justice. “To be left with no remedy… given such a violent and unprovoked shooting, weakens the constitutional foundation of America’s house,” they said, adding that it would “promote a Wild West attitude on our border,” where security agents would feel empowered to mete out justice as they saw fit.

Lee Gelernt, a lawyer with the American Civil Liberties Union since 1992, also disagreed with the court’s decision, saying:

The gravity of this ruling could not be clearer given the Trump administration’s militarized rhetoric and policies targeting people at the border. Border agents should not have immunity to fatally shoot Mexican teenagers on the other side of the border fence. The Constitution does not stop at the border.

Veronica Escobar, a Democratic congresswoman from Texas and former El Paso county judge agreed, stating that the Supreme Court decision “denies justice to the family of Sergio Hernandez” and “sets a dangerous precedent by making exceptions to accountability and due process.”

Unfortunately, the Hernandez shooting is far from unique. In 2012, for instance, Jose Rodriguez, a 16-year-old from Nogales, Mexico, was standing in the street in the border town when agent Lonnie Swartz unloaded ten rounds into his back and head from the American side of the border. Like Mesa, Swartz claimed he was acting in self-defense. In 2018, an Arizona court found him innocent.

In recent years, the U.S.-Mexico border has become increasingly militarized, with President Trump campaigned on a platform of building a wall between the two countries. Border Security and ICE budgets have greatly expanded. Meanwhile, those that challenge the policy are increasingly targeted; last year, four volunteers from the humanitarian group “No More Deaths” were found guilty of leaving water in the Arizona desert for thirsty migrants.

And yet illegal border crossings have been drastically falling for twenty years. Between the 1980s and the mid-2000s, the government reported apprehending between 1 and 1.6 million illegal immigrants per year. That number has dropped to less than half a million annually.

Yesterday’s decision was made only possible with the votes of controversial Trump nominee Brett Kavanaugh. Kavanaugh was appointed to the position in 2018, despite multiple high-profile allegations of rape and sexual assault against him. He was championed by a number of conservative religious organizations who saw him as the final vote they needed to overturn Roe vs. Wade and re-criminalize abortion. While no attempt to do so has been made yet, yesterday’s ruling offers another precedent that empowers America’s militarized Border Patrol agency to act with impunity, safe in the knowledge that courts will back them up.