Justin Trudeau requires an intervention. Somebody needs to tell him his obsession with Venezuela has led him down a path of misery, destruction and failure.

During a call on Monday, August 17 with Chilean president Sebastián Piñera, Trudeau again raised “the situation in Venezuela,” according to the official readout published by the Prime Minister’s Office. Amidst massive demonstrations against Piñera in October—during which the right wing leader sacked his entire cabinet—Trudeau also called the president to discuss Venezuela as he did in February 2018 and previously. Trudeau has also discussed the need for a “democratic transition” in Venezuela with the Trump administration, along with a host of other hemispheric presidents, many of whom are members of the Lima Group—the multilateral body consisting of 14 countries, including Canada, that is dedicated to a “peaceful exit to the ongoing crisis in Venezuela.”

Further afield, Trudeau has spoken to the leaders of Japan, France, Spain, Austria, Ireland and Italy as well as the International Monetary Fund and the European Union to convince them to join Canada’s campaign against Venezuela. A quick search of the prime minister’s press releases found 144 references to Venezuela. Conversely, there are just four mentions of Bolivia, six of El Salvador and 31 of Venezuela’s much larger neighbour Brazil (14 of which are related to the 2016 Olympics and others to meetings about Venezuela).

Trudeau’s stance towards Venezuela is shared among the members of his cabinet. Global Affairs has put out hundreds of statements and tweets about Venezuela over the past three years. On Friday, August 14, Foreign Minister François-Philippe Champagne released a statement and tweeted at Venezuela’s self-declared acting president, Juan Guaidó, a “call for the establishment of a transitional government in Venezuela.” In response, US journalist and editor of The Grayzone, Ben Norton, tweeted, “Canada’s woke Liberal government will condescendingly correct you for using the word ‘mankind’ while simultaneously trying to organize a right wing coup to overthrow Venezuela’s democratically elected leftist government. Intersectional imperialism.”

🇨🇦, w/ its int’l partners, calls for the establishment of a transitional gov. in Venezuela w/ a process driven by Venezuelans.

A swift & peaceful transition to democracy is the most sustainable route to stability, recovery & prosperity.
@jguaido
https://t.co/YF1ojMHPRk pic.twitter.com/dDzXp8cKcT

A recently released Access to Information request highlights Canada’s role in emboldening Guaidó’s claim to the presidency. Two weeks before the new head of the opposition-dominated National Assembly declared himself interim president on January 23, 2019, then-Foreign Affairs Minister Chrystia Freeland had a phone meeting with Guaidó. According to a partly redacted document submitted by Canadian Foreign Policy Institute fellow Tamara Lorincz, the speaking points for the conversation reveal that “with Canada’s support, Juan Guaidó was invited to deliver a presentation on this [self-declaration] at the Lima Group National Co-ordinators meeting on December 19, 2018.”

The documents confirm the central role Canadian diplomats played in the US-backed plan to ratchet up tensions by claiming a relatively marginal National Assembly member was Venezuela’s rightful president. At the time, the Associated Press reported on Canada’s “key role” in building international diplomatic support for Guaidó while the Canadian Press noted that Canadian diplomats spent “months” coordinating the plan with hard-line opposition figures within Venezuela.

In the fall of 2017, the Canadian federal government hired a pro-Washington former diplomat to coordinate its efforts to oust the democratically elected government of Nicolás Maduro. Canadian taxpayers have shelled out hundreds of thousands of dollars to contract Allan Culham to act as a special adviser on Venezuela. During his time as Canadian ambassador to Venezuela from 2002 to 2005, Culham was openly hostile towards former Venezuelan leader Hugo Chávez.

Yet, these efforts have resulted in a series of dramatic failures. As Arnold August recently pointed out in Canadian Dimension, the pro-Guaidó international coalition is fraying with the self-declared president’s National Assembly mandate expiring in a few months. Similarly, top US Democrats are increasingly stressing the failure of American foreign policy in Latin America. Despite this, the Trudeau government does not appear to have any plan to extricate itself from this downward political spiral.

The campaign to overthrow Venezuela’s government is unprecedented in Canadian foreign policy history, as is the reaction from civil society groups, many of which campaigned against Canada’s bid for a seat on the United Nations Security Council citing our collaboration with Guaidó and other elements of the right wing opposition.

While the hypocrisy of the Liberals is not unprecedented, the campaign against Venezuela is startling in its imperialist flavour. Across Latin America, the Trudeau government has largely ignored human rights violations committed by pro-corporate governments backed by Washington. The Liberals have also said little about domestic repression and political corruption in Haiti, Bolivia, Chile and Colombia, and remained silent on flagrant violations of democratic norms in Brazil and Honduras.

Principled and brave Canadians should urge Prime Minister Trudeau to abandon his Venezuela policy and insist that it will only lead to further embarrassment and a permanent stain on Canada’s reputation. Is doing Donald Trump’s dirty work worth it?

Join the Canadian Foreign Policy Institute (CFPI) on Thursday, August 20, for an historic event featuring Venezuelan Foreign Minister Jorge Arreaza, who will speak directly from Caracas on Canada’s interference in Venezuela and the Trudeau government’s support for self-declared interim president Juan Guaidó. Arreaza will be joined by Pink Floyd co-founder and political activist Roger Waters. The event is sponsored by Canadian Dimension. You can register for the webinar here. 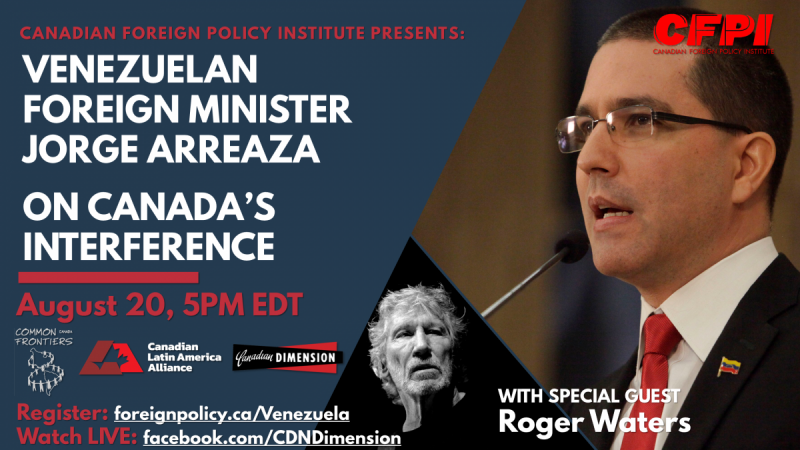 Featured image: A mural depicting Simon Bolivar painted by Carlos Zerpa, 26, of the Guerrilla Communications Collective in Catia, a slum in Caracas, Venezuela. Photo from VenezuelaSolidarity.ca.