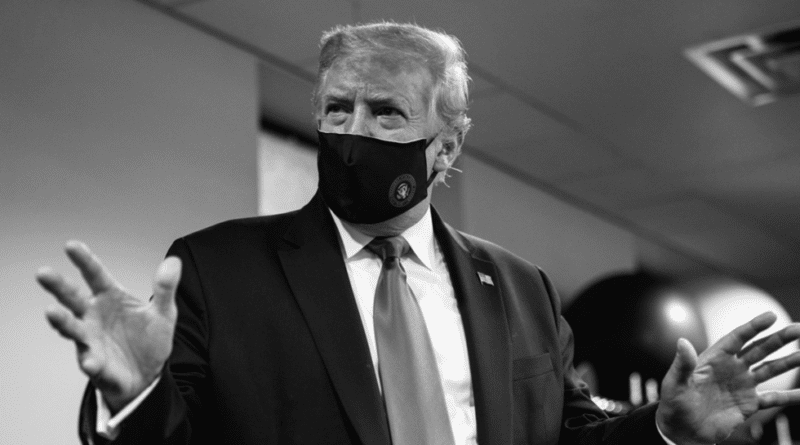 July 20, 2020.- After weeks of pundits criticizing the president for not promoting or wearing a mask to protect against the coronavirus pandemic, Donald Trump took to Twitter to endorse the act because “there is nobody more patriotic” than him.
“Many people say it is patriotic to wear a face mask when you can’t socially distance,” Trump tweeted on Monday along with a black and white photo of him wearing just such a mask. “There is nobody more patriotic than me, your favorite president.”

The president also took the opportunity to once again blame the worldwide pandemic on China.

“We are United in our effort to defeat the Invisible China Virus,” he wrote.

We are United in our effort to defeat the Invisible China Virus, and many people say that it is Patriotic to wear a face mask when you can’t socially distance. There is nobody more Patriotic than me, your favorite President! pic.twitter.com/iQOd1whktN

Though mask mandates have become more and more common across the US, many conservatives have pushed back against the trend, questioning the practicality of masks and raising concerns about individual rights.

RELATED CONTENT: All Confusion and Contradictions in Trump’s Apocalyptic America

While Trump’s endorsement of wearing a mask has been something critics have sought for weeks now, his photo was still not enough to win over many, as he’s now being blasted for being too late with the endorsement and not creating a federal mask mandate.

“Note: He still doesn’t support a national mask mandate which other countries with less cases than the U.S. have,” tweeted reporter Yamiche Alcindor, who has a history of clashing with the president and his administration.

Trump tweets a photo of himself in a face mask after 140,000 Americans have died from the coronavirus.

trump showing up in a tweet with a mask is like having 40 9/11s then saying "hey, maybe we should do something about bin laden."

May 26: "You want to be politically correct," Trump mockingly said to a reporter who chose not to remove his mask

Others predicted the inevitable storm of criticism from liberals in the media only minutes after Trump’s tweet.

A lot of people in my replies have been wondering why Trump isn't pivoting to "the democrats are making masks a wedge issue to prolong the pandemic" and whaddya know… That just might be coming. https://t.co/32Khf9fuke

And now we wait

Before you freak out, it seems few people actually understand what @realDonaldTrump is doing here…He KNOWS that the Left HATES anything that he does, SOOOO what does he do?! Takes a picture with a mask saying how “Patriotic” it is. SHEER GENIUS. 🤣🤣🤣🐸🐸🐸

On top of his critics on the left, the president has also now found himself the target of criticism from some anti-mask conservatives, like author Michelle Malkin, who found nothing humorous about the new tweet.

“This is not patriotic,” she wrote in response to the photo.