The Permanent Representative of Venezuela to the United Nations, Samuel Moncada, has provided more details about the comments made a few days ago by Mark Esper, US secretary of defense during the Donald Trump administration. In an interview with CBS network, Esper stated that Trump’s advisers proposed two military invasions in his last year in office: one against Venezuela and the other against Iran, as well as carrying out a total blockade against Cuba. On Thursday, May 12, Moncada reported that the proposed attack on Venezuela was to bomb the José Antonio Anzoátegui Petrochemical and Industrial Complex, located near Barcelona, ​​in the eastern state of Anzoátegui. 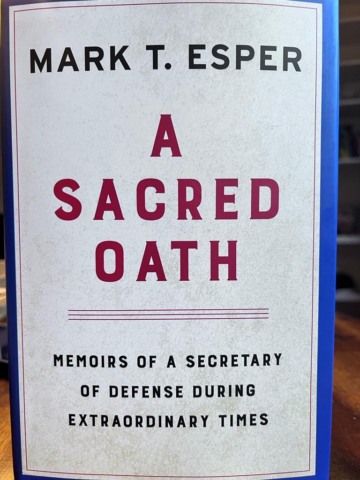 “On June 9, 2020,” explained Moncada in another tweet, “at a meeting of the National Security Council, Robert O’Brien, presidential adviser, proposed a military attack on the José Refining Complex in eastern Venezuela. This is what Esper himself confesses, who was at the meeting.”

RELATED CONTENT: On Venezuela, Only Hawkish ‘Dissent’ is Allowed

The Venezuelan diplomat also shared photos of excerpts from Esper’s book, along with their respective translation.

Moncada continued, “The tactical objective was to paralyze Venezuela’s oil economy and, with the chaos and suffering of the people, achieve the strategic objective: overthrow President Maduro and impose Juan Guaidó as head of government.”

“The operation,” Moncada continued in another tweet, “would be carried out with an airstrike on the oil complex or an amphibious attack with special troops of the US Navy. This act of war was consistent with ongoing calls for military action that Trump had demanded since 2017.” 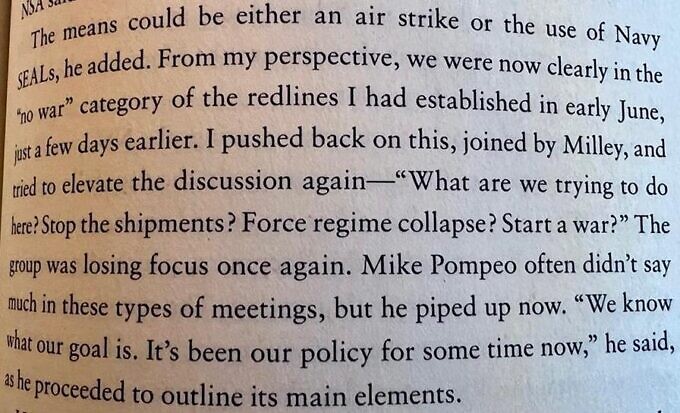 Moncada wrote in his fifth tweet of the series, “Secretary Esper, Chairman of the Joint Chiefs of Staff [Mark] Milley, and CIA Director [Gina] Haspel, agreed that the attack was a counterproductive act of war because it would unite the people in the defense of President Maduro.”

The Venezuelan diplomat explained that “this group did not approve the military attack and proposed attacks with cybernetic operations, on the digital control systems of the economic infrastructure, and clandestine operations supported by the US but conducted by the opposition inside Venezuela.”

“General Milley also proposed unconventional warfare operations (such as the contras in Nicaragua) carried out by Venezuelan mercenaries trained in Colombia,” Moncada explained further. “That idea was proposed to Guaidó several times in a meeting with Trump at the White House on February 5, 2020.” 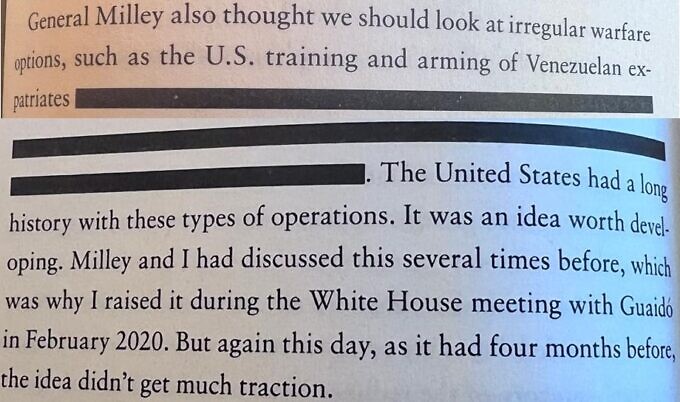 In this context, it is important to remember the several operations that have been carried out in recent years by the opposition in their attempts to overthrow the government of President Nicolás Maduro.

RELATED CONTENT: Reply to ‘Politico’ on Maduro and Venezuela

On August 4, 2018, an attack on the president’s life with explosive-loaded drones was thwarted; however, it wounded seven military personnel.

On February 23, 2019, the Battle of the Bridges took place, when a military incursion was conducted from Colombia to insert trucks carrying alleged humanitarian aid into Venezuela through various border crossings. In reality, it was an operation intended to allow paramilitaries and deserters to enter Venezuela and to try to take over border states. This occurred a month after the self-proclamation of Juan Guaidó as the “interim president” of Venezuela. The operation, which was foiled by the Venezuelan army and people, had been organized through the active participation of Guaidó and the support of Colombia and other countries of the Lima Group.

In March 2019, a series of power outages over several days shook almost the entire country. The Venezuelan government reported that they were due to cyber-attacks against the principal control systems of the national electrical grid.

On April 30, 2019, a small group of soldiers and members of SEBIN (intelligence agency) attempted a coup against President Maduro, which failed without any fighting.

On May 3, 2020, an incursion by mercenaries and paramilitaries in La Guaira, Chuao and other towns on the Venezuelan coast was foiled. That invasion attempt, called Operation Gideon, was carried out by mercenaries from a US company named Silvercorp. While eight attackers died while trying to invade Venezuela, no Venezuelan civilian or military personnel was harmed. The aim of the invasion was the capture or assassination of President Maduro.

In September 2021, severe failures of the Banco de Venezuela system was reported, which the Venezuelan government denounced as a cyber attack on the national banking system.