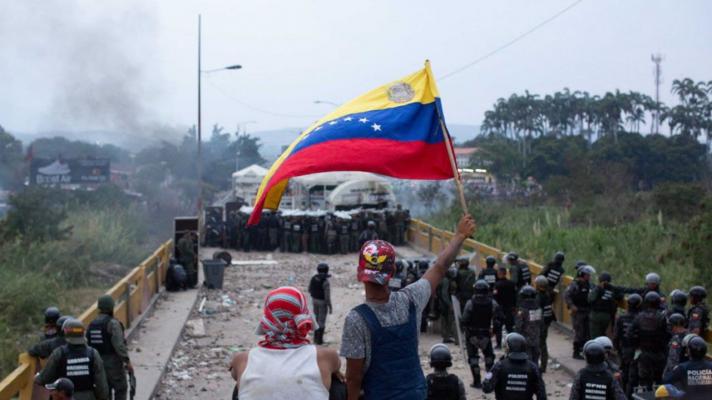 In the daily brief for this February 23 by the Samuel Robinson Institute for Original Thought, a recounting and analysis of what happened two years ago on the Colombian-Venezuelan border was made, when anti-Chavismo joined the “Guaidó plan” and tried to enter Venezuela with illegal “humanitarian aid” trucks, along with a militia of armed operators, without authorization from the Venezuelan state.

We fully quote the report:

After at least three years of unilateral coercive measures, sabotage and boycotts that led to the hoarding and shortage of essential goods in the national territory, the then-new leader of anti-Chavismo, Juan Guaidó, had declared on February 12, 2019 that “on the 23rd, humanitarian aid will enter Venezuela—yes or yes, determined and decisively!”

RELATED CONTENT: Film “The Battle of the Bridges” to Participate in the International Festival of New Latin American Cinema

Context. Anti-Chavismo had declared President Nicolás Maduro—re-elected in May 2018 with 67.84% of the vote—a “usurper,” because they considered the National Electoral Council, appointed by the Supreme Court of Justice, “illegitimate.”

The montage. On February 22 the concert “Venezuela Live Aid” was held in the border city of Cúcuta (Colombia), organized by the billionaire Richard Branson with massive propaganda. More than 30 national and international artists appeared to support the entrance of the “humanitarian aid” while the Venezuelan government blocked the border.

RELATED CONTENT: February 23rd: The Epic Victory of the People and the FANB! – Battle of the Bridges Anniversary

On this side of the border. That same day, from Caracas, President Maduro reported that he was breaking diplomatic relations with Colombia while the Colombian government announced the withdrawal of its diplomatic personnel, who remained in Caracas even though did not recognize the Venezuelan government.

Subsequent revelations. The self-proclaimed imposter president went to Cúcuta for the media montage. Later he was shown in photos with Alberto Lobo Quintero, alias “Brother,” financial leader of the paramilitary gang Los Rastrojos, from Colombia; with their member “Nandito” and with Jhon Jairo Durán Contreras, alias “Menor,” number two of Los Rastrojos, from whom he received help with the transfer. The images were confirmed by the Cúcuta Police and by Colombian media such as El Espectador.

Why it is important. Two years after its launch, the “Guaidó plan” was an obvious failure. However, the damages, the deaths caused by the blockade of State funds that have been placed in the hands of the “interim” imposter by the US government, and the public money lost to its corruption networks are unquantifiable. The threat of interference from the Duque administration has not ceased as Venezuela continues to overcome difficulties every day, while maintaining peace.