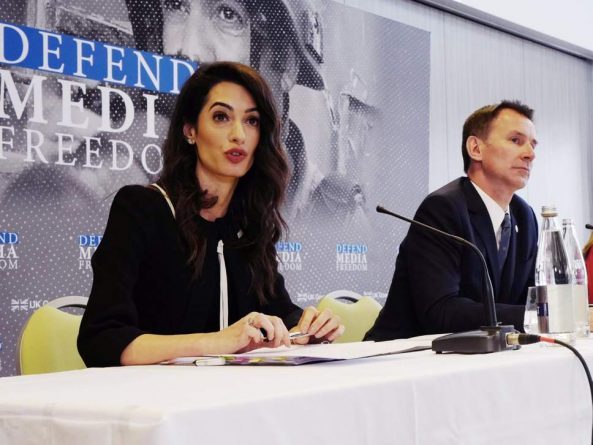 Editorial Note: Reporters Without Borders is a know “Pro-US imperialism” NGO but it still make you raise eyebrows when you see their feeders being so low in the rankings they pay for.  Having Venezuela in position 148 (below Colombia, Mexico and Central American countries) when journalist work in Venezuela is safer than in any other country in Latin America and there have not been a single journalist killed in decades in this country, deporting ONLY 3-4 foreign journalist working without due permits while the country is being victims of the US unconventional war since January, are just some evidences of how biased this NGO is.

The UK remains one of the worst counties in western Europe for freedom of the press, according to the latest report by Reporters Without Borders (RSF).

Foreign secretary Jeremy Hunt appointed Amal Clooney as special envoy on media freedom earlier this month as part of a global campaign on reporting restrictions. Yet the UK is ranked lower than any of its western European neighbours except Italy.

“We should hold ourselves to a higher standard, and seek to be one of the best, not worst-performing countries in western Europe,” said RSF’s UK director Rebecca Vincent. “Too often steps taken in the name of national security trample press freedom.”

The US slipped three places to 48th in the world as a result of its increasingly hostile climate towards journalists. The report said that never before have US reporters been subjected to so many death threats or turned so often to private security for protection.

The latest annual report offered a bleak assessment of reporting freedoms around the world, with experts finding a decline in the number of countries regarded as safe for journalists.

Only 24 per cent of the 180 countries were classified as “good” or “fairly good” for the press – a two per cent decline – while over three-quarters of the world is now considered “problematic”, “difficult” or “very serious” for media freedoms.

RSF secretary-general Christophe Deloire said: “Democracy is in great danger. Halting this cycle of fear and intimidation is a matter of the utmost urgency of all people.”

He added: “If the political debate slides surreptitiously or openly towards a civil war-style atmosphere, in which journalists are treated as scapegoats, then democracy is in great danger.”

Norway is ranked first for press freedoms for the third consecutive year and Turkmenistan replaced North Korea in last place.

The study’s authors said the level of violence used in some parts of the world to persecute journalists who aggravate authorities “no longer seems to know any limits”. They said the Saudi columnist Jamal Khashoggi’s murder in the Saudi consulate in Istanbul last October sent a “chilling message”.

The Americas saw the greatest deterioration of any part of the world during the last year. Nicaragua fell 24 places from the previous year’s list due to attacks on journalists covering protests against President Daniel Ortega.

El Salvador saw the region’s second steepest fall – 15 places – because journalists suffered armed attacks, harassment and intimidation by politicians, according to the report.

There were also poor performances in Venezuela, Brazil and Mexico. The latter is one of the world’s deadliest countries for the media, with at least 10 journalists killed in 2018.

The EU and Balkans registered the second biggest deterioration in press freedoms, but it remains the region where press freedom is respected most and which is the safest for journalists.

According to a separate report recently published by RSF, 80 journalists were killed around the world in 2018, up from 65 in 2017.

The group’s annual index assesses six separate benchmarks and assigns each country a score calculated from answers to a questionnaire in 20 languages that is completed by international experts.

Earlier this year a report by the Freedom House think tank found an “alarming” decline in democracy across the world, as a growing number of countries move towards authoritarian rule.

Its report found 2018 was the 13th consecutive year of deteriorating political freedoms around the globe.