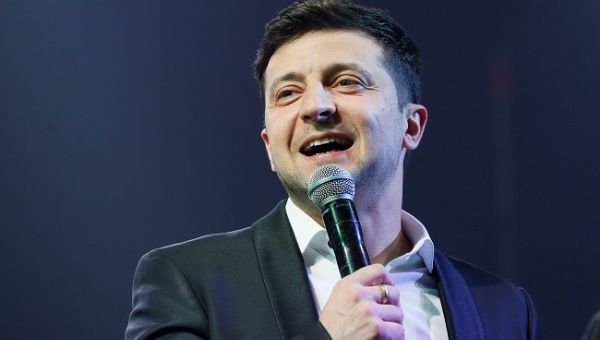 Popular comedian Volodymyr Zelensky who has no formal political experience has won the most votes in the first round of Ukraine’s presidential elections on Sunday.

According to the Central Election Commission, based on voting up to 18:00 (Ukraine), Volodymyr Zelenskiy received 30.4 percent of the vote and current leader Petro Poroshenko in a distant second place collected 17.8 percent. Ukrainians had to choose among 39 candidates.

“I would like to say ‘thank you’ to all the Ukrainians who did not vote just for fun,” Zelenskiy told cheering supporters on Sunday evening. “It is only the beginning, we will not relax.”

Poroshenko called the result a “severe lesson”, especially from younger voters and appealed for their support in the second round.
“You see changes in the country, but want them to be quicker, deeper and of higher quality. I have understood the motives behind your protest,” he said after the exit poll.

The popular comedian Volodymyr Zelenskiy portrays a history-teacher-turned-president in his hit television show, “Servant of the People,” and built his campaign around the idea of people power and contrasts himself with the political establishment. His opponents accuse him of being linked to one of the most powerful Ukrainian oligarchs, Ihor Kolomoyskiy, who recently endorsed him publicly. In local media, Zelenskiy has already been dubbed “the Ukrainian Donald Trump.”

During the campaign, Zelenskiy has seized two of the most unifying themes: the fight against corruption and promise to lower gas prices. Poroshenko’s campaign focused more on the threat of Russia and accused his opponents of being “pro-Russian.”

The Ministry of Interior said hundreds of electoral violations have been reported, but foreign observers reported the vote appeared to be free of difficulties.

The majority of voters in separatist-held eastern Ukraine and Crimea were unlikely to take part in the election as they need to undergo a special registration process on Ukraine-controlled territory.

But Crimean residents who kept their Ukrainian citizenship after the Russian annexation five years ago crossed the land border to mainland Ukraine, from where buses took them to the nearest polling stations.

Just 9 percent of Ukrainians have confidence in their national government, the lowest of any electorate in the world, a Gallup poll published in March showed, reported the news agency Reuters.

If no candidate receives more than half the votes, the election goes to a run-off on April 21.