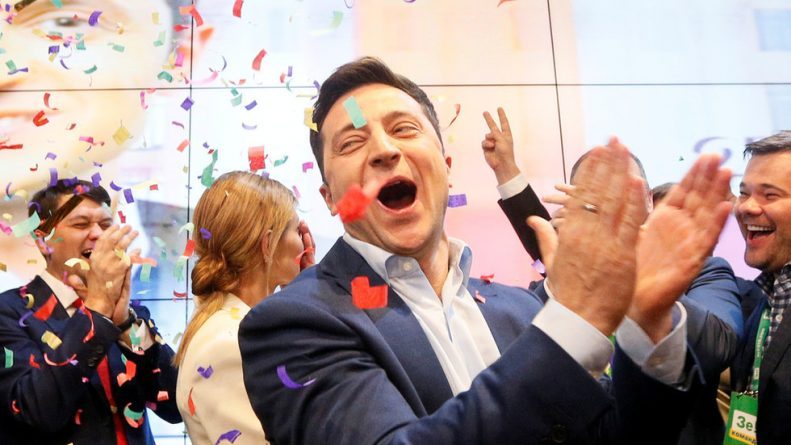 Ukrainian comic Volodymyr Zelensky is set to win the presidency in a landslide victory over incumbent leader, Petro Poroshenko, exit polls show. Zelensky has already been visited by police over violating one election law.

The high turnout in the second round of the presidential election in Ukraine reveals an enthusiasm for the promise of change brought by Zelensky. He’s leading with some 72-74 percent of the votes, according to the latest exit poll figures. Incumbent President Petro Poroshenko secured only around 25-28 percent of votes, suffering a crushing defeat at the hands of Zelensky.

Zelensky’s team celebrated victory as soon as the first official exit polls were out, even reciting a rocket launch-like countdown. The soon-to-be president didn’t waste many words, simply thanking his parents, his wife, his team and Ukrainian citizens who voted for him. He also jokingly thanked the Ukrainian Security Service (SBU) for “keeping him in shape” during the campaign.

ZELESNKIY is in the building. In a life-imitates-art moment he enters to the theme music for his Servant of the People show in which he plays a common man who becomes president. In two minutes he may find he’s won a real presidential election. pic.twitter.com/bmZyYltbza

RELATED CONTENT: US and NATO’s Ongoing Support for Neo-Nazis in Ukraine

In what could be a sign of Zelenskiy’s media strategy, the “briefing and questions” promised with journalists was in fact him saying a few phrases + zero questions, and he then went off to speak in private to 1+1, the channel his shows are on which is run by Kolomoyskiy.

In contrast, Poroshenko held a lengthy speech and a Q&A, vowing to remain active in politics and to protect the “achievements” of his presidential term, including sanctions against Russia. Yet he accepted the defeat and said the election was fair.

It wasn’t all graceful, though. Poroshenko also said Privatbank will be used as payment to Kolomoisky for election support. And that there will be a celebration in the Kremlin of Ukraine’s election results