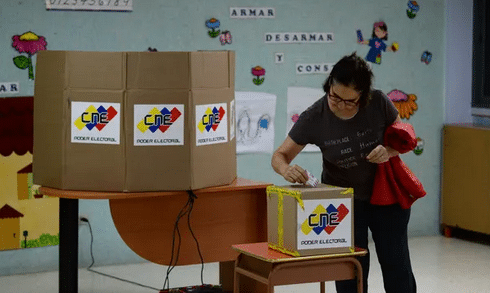 In Venezuela, on November 21 there will be elections for governors, mayors, regional deputies and councilors throughout the country. The call for these elections has put into action the political actors, the government, and the opposition, who are preparing to nominate candidates and launch themselves into battle for the favor of Venezuelans. This event could redefine the political map of Venezuela. The opposition could achieve new solid spaces of power and the government will have to defend the spaces it possesses. Both political identities face a significant challenge of re-legitimation.

However, everything will depend on the capability of the political organizations to ascertain that the voters turn out at the polling stations. We are living in an environment where a significant part of the opposition has maintained an abstentionist campaign for several years, having opted for “non-politics” to try to seize power. In addition to this political crisis, there is the economic crisis generated by the US and European blockade, which means that people have to dedicate most of their time to solving the issues of livelihood, which reduces attention to political issues.

However, the formation of a new board of the National Electoral Council (CNE), with the incorporation of opposition figures and a more balanced profile, has revitalized the expectations of political actors and voters, as shown by a study by Datos ÚN that found 70% of Venezuelans think that the new electoral authorities would encourage greater participation.

This week Últimas Noticias conducted a poll on the intention to vote in the upcoming elections, scheduled for November 21. For the responses, a Likert scale type design was used, where the options were: I will certainly vote; it is quite likely that I will vote; I have not decided yet; it is unlikely that I will vote; and it is certain that I will not vote. Hence, the survey measures the degree of intention or decision that people have regarding going to vote in the regional elections at this moment, six months before the day of the vote.

This digital survey was carried out through the ultimasnoticias.com.ve website and Últimas Noticias social media accounts. Participation was free and voluntary, and all the responses were considered for the survey. The poll was conducted between Monday, May 24 and Friday, May 27, and 1,416 unique responses were received. Participants were asked in which state they vote and how likely it is that they will go to vote on November 21. In this way, a chart of the intention to go to vote was obtained, both on the national level and at the level of individual states.

The results were the following. 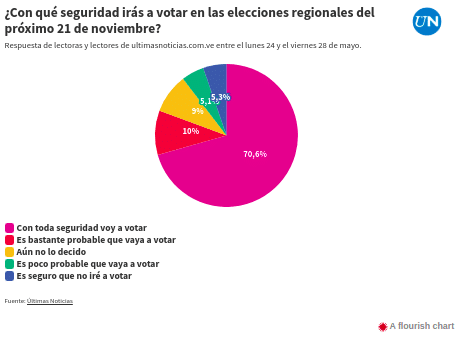 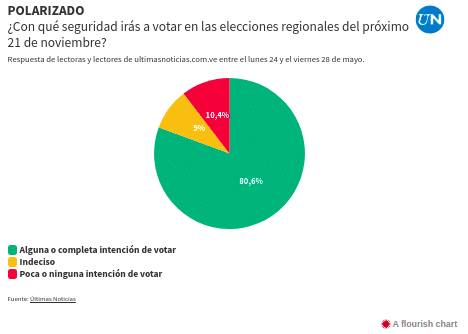 If the data is grouped, the survey gives about 80.6% having some or total intention to vote on November 21, while 9% are undecided, and 10.4% have little or no intention of voting.

This paints an encouraging picture for the upcoming regional elections.

Now let us see what the survey revealed for each of the states. 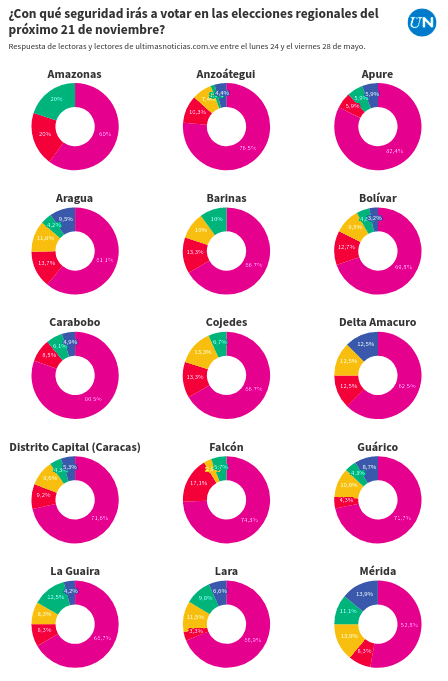 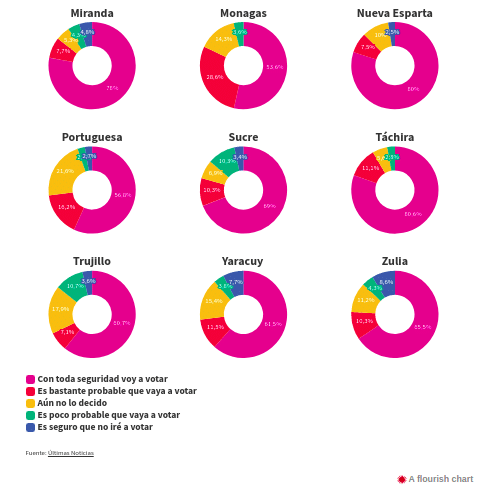 RELATED CONTENT: Anti-Chavista Stalin González on 21N Regional Elections: ‘An Opportunity to Get Closer to the People’

Los Andes draws attention
Both the highest and the lowest values ​​were found in Andean states. The state that showed the greatest intention to vote was Táchira, with 91.7% who considered it certain or quite probable that they will vote. And the state with the lowest record of intention to vote on 21N was Mérida, with 61%, while negative intentions were at 25%. 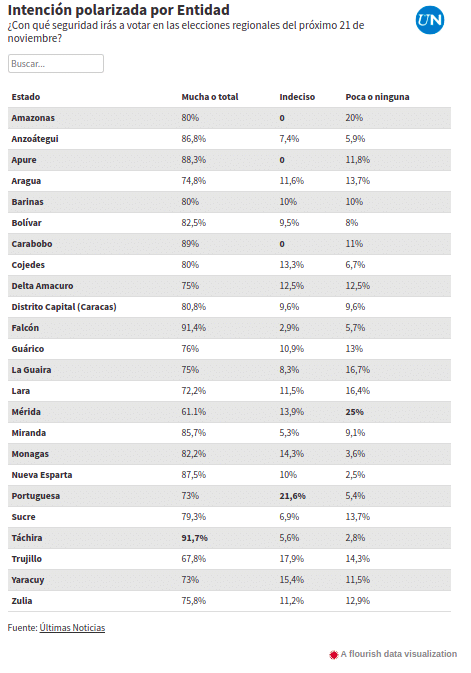 The state with the highest number of undecided voters was Portuguesa, where 21.6% still have not decided whether or not they will vote in the regional elections. 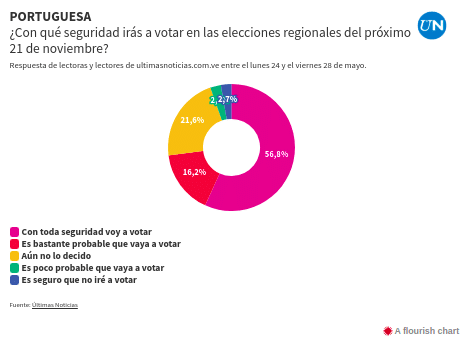 The five states with the highest intention of participating in the elections were Táchira, Falcón, Carabobo, Apure, and Nueva Esparta. 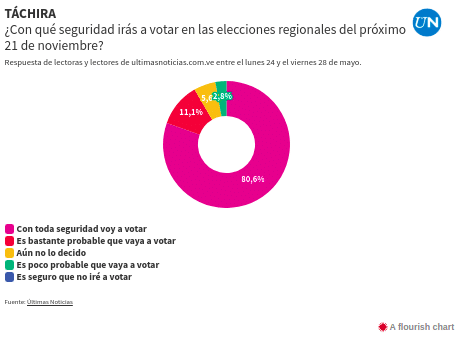 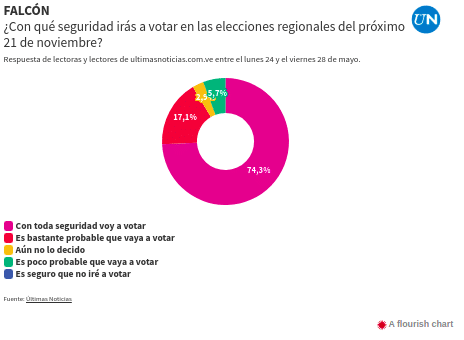 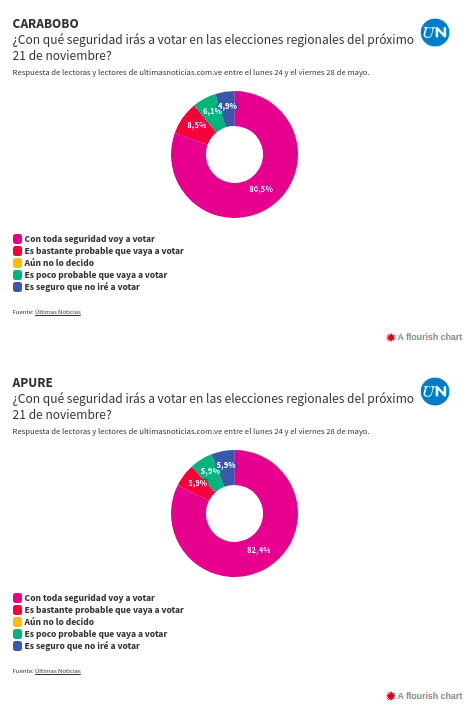 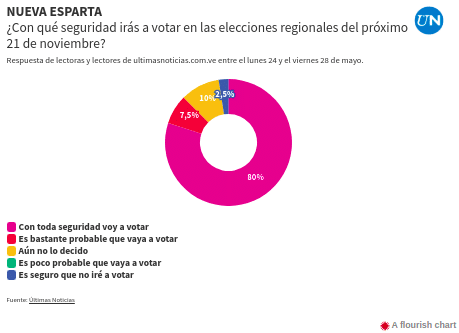 All states showed a majority positive intention to vote, it being above 60% in all states. The survey also highlights the states showing the highest percentages of intentions of non-participation, compared to the others. These states are Mérida, Amazonas, La Guaira, Lara and Trujillo. In these regions, political actorstivists should pay special attention to encourage voting. 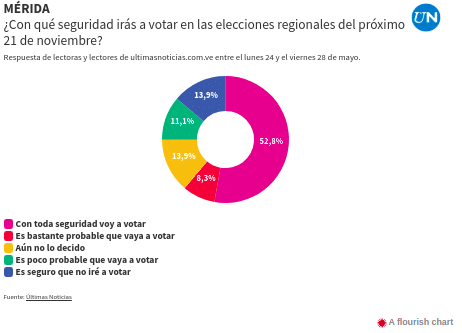 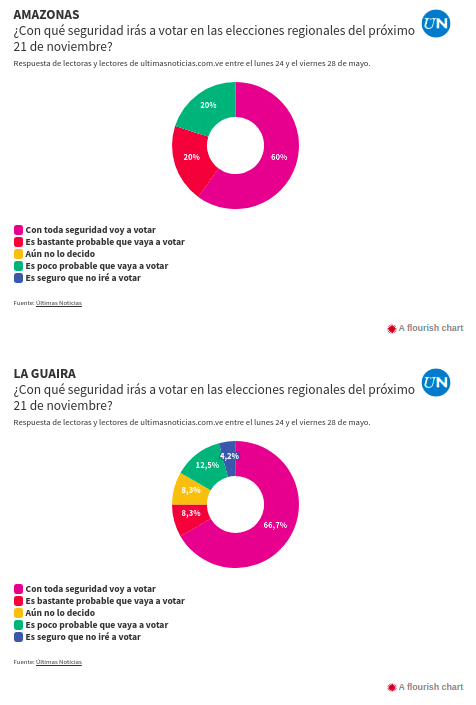 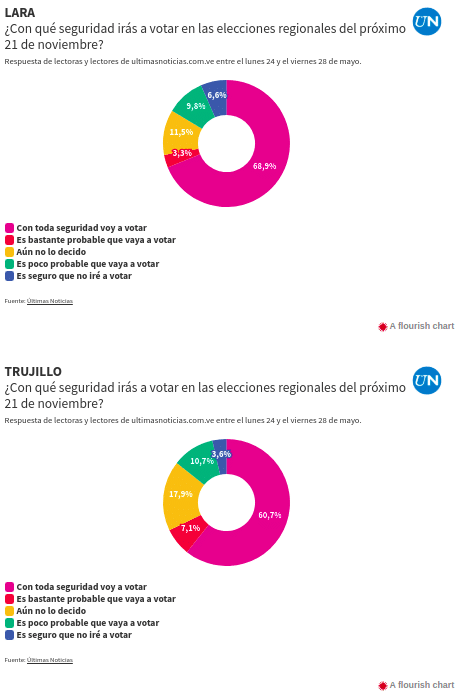 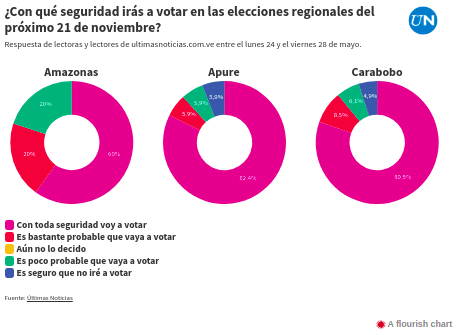 This is a basic scenario, which can serve to illuminate the configuration of political and electoral strategies. A new poll will need to be carried out on a date closer to the day of the vote, in order to analyze how political actors, institutions and the course of events would have influenced the voting intentions of Venezuelans.

Featured image: A woman votes during an elections in Venezuela. For the upcoming regional elections, divisions among the opposition may hit turnout. Photograph: Federico Parra/AFP/Getty Images