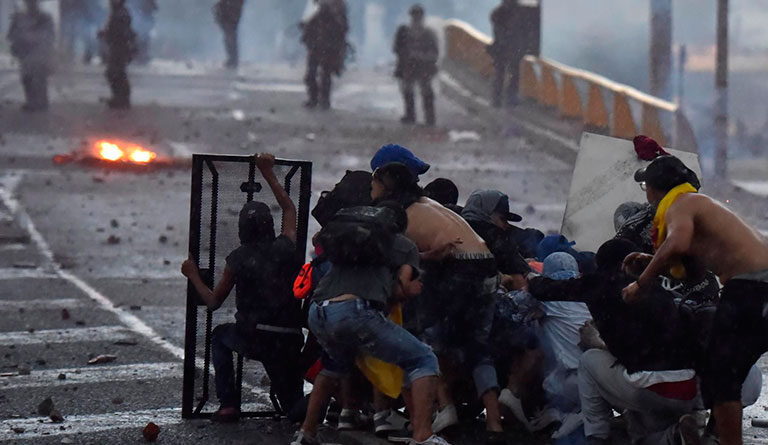 At least 10 people died on Friday in the Colombian city of Cali, making it one of the deadliest days in the anti-government demonstrations that began a month ago in Colombia and that have suffered harsh repression from the police. This was reported by the mayor’s office on Saturday, May 29.

“Ten people” died [only on Friday] “is the report that we have this morning” on events related “to the protest and civil dynamics” in the capital of Valle del Cauca, said the secretary of security of the city, Carlos Rojas, on Caracol Radio .

Armed men fire guns in Cali today while cops look on. The “CAI” building in the background is an urban police post.

Imagine if video smartphones had been a thing 20 years ago, when #Colombia’s security forces denied allegations of collaboration with the AUC paramilitaries. https://t.co/U1QZNTvpMs

Eight of the deaths were due to firearms, according to a police report.

Violence erupted early on Friday, when a mob lynched a public prosecutor who had killed two protesters for stopping him on a blocked avenue. Later, civilians were seen firing rifles alongside police officers against protesters, in videos posted on social media with people denouncing that police personnel dressed as civilians were responsible for the shootings.

”In the south of the city we had a real scene of confrontation and almost an urban war where many people not only lost their lives, but there was also a significant number of injuries,” lamented Rojas.

#Colombian police, which murdered over 50 people and disappeared 500+, forcing a detaineed to give a statement against protestors. He's clearly under duress, beaten and has a hard time remembering what they told him to say.
Videos place him playing in a peaceful concert earlier https://t.co/xlPVDvxe6s

In a month, the mayor’s office has reported 550 injured only in Cali.

Cali (southwest), with around 2.2 million inhabitants, is the epicenter of ongoing protests and roadblocks by a part of the population exasperated with the authorities, and they have been brutally repressed by the police.

The road closures divide the government and the most visible front of the protest, who have been talking for two weeks without reaching any agreement.

In addition to the abuses by the public force, which have been condemned by the international community, there are constant attacks by civilians against protesters and even medical missions, as recorded in numerous videos.

It is ”unacceptable that we have civilians practically turning our city into a war zone,” added Rojas.

Colombian protesters are burning US and Israeli flags. This isn't just a strike against austerity measures. It's a full on uprising against imperialism 🔥

To make things worse, President Iván Duque ordered the deployment of over 7,000 soldiers throughout the department under the guise of ”military assistance,” an euphemism for militarization of the city where curfews are already in place.

In a month of popular uprising, 49 deaths were registered throughout the country as of Friday, according to the official count. The Office of the Prosecutor has established that at least 17 of the cases are directly related to the demonstrations.

During the violent protests in Venezuela in 2014, the international community launched a harsh campaign that led to criminal sanctions currently affecting millions of Venezuelans and accusing President Maduro of being a dictator, when in reality his behavior and the conduct of Venezuelan authorities were way less repressive than what is being shown by Iván Duque now.

This time, in Colombia, US and corporations funded NGO Human Rights Watch claims to have “credible reports” of 63 deaths, 28 related to the crisis. However, the number of missing people is on the rise, with dead bodies already being discovered in empty lots and also in rivers, and Colombians are talking about mass graves, an unfortunate phenomenon that is not new in Colombia.

The present crisis started when the government wanted to burden the working class and the lower middle class, already hit hard by the pandemic, with more taxes to fill the fiscal gap caused by the economic emergency generated by the pandemic.

Duque withdrew the proposal later, but police repression inflamed popular anger. Today the streets of Colombia are full of young people without jobs or education, asking for a more human State in the face of the ravages of COVID-19.

Featured image: Protesters at a roadblock in Colombia. Photo courtesy of EFE.