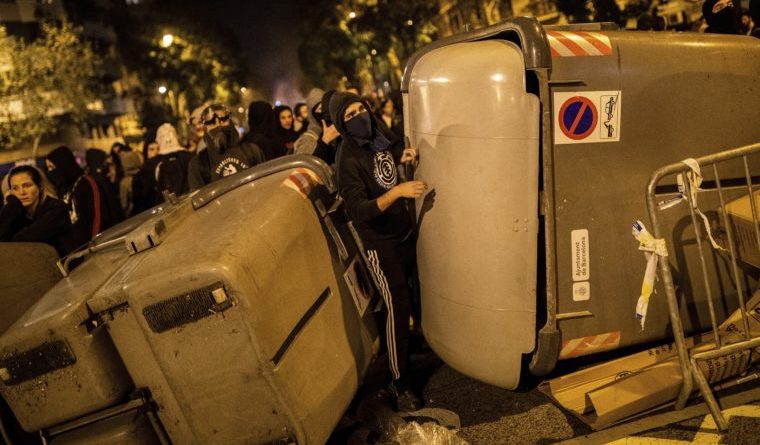 Editorial note: We have edited a section of this article referring to Hong Kong. You can read it if you like in the original post (link below).

By John Hird & Rob MacDonald
The Spanish state’s act of revenge against the Catalan people for daring to exercise their right to an independence referendum by handing out lengthy jail sentences to the political leaders who organized the vote on 1 October 2017, has provoked a tsunami of protests, which threaten to surpass, in scale and revolutionary vigor, the mass movement which provoked the Spanish state’s biggest crisis for over 40 years in 2017 and 2018.

MONDAY: On the day the sentence was announced thousands occupied El Prat airport, despite brutal repression by riot police. Students walked out of classes and town squares were occupied throughout Catalonia.

TUESDAY: Spontaneous demonstrations continued and the state ordered police to go in hard against the youth, workers and pensioners. Probably up to 100,000 people were on the streets in the first two days. Disgracefully, a young man lost an eye after being shot by a rubber bullet.

WEDNESDAY: On the third day of demonstrations there are National police cordons in Barcelona and low flying helicopters. Barricades are alight and there have been numerous police charges against the youth. Roads are being blocked and police continue to fire rubber bullets, while a water cannon was deployed for the first time ever in Barcelona. The high speed AVE train was held up for five hours between Barcelona and Figueres after a cable was cut.

THURSDAY: Quim Torra, President of Catalonia, announced that the Catalan government would seek to organize another referendum before the end of the present legislature. The announcement sent the Spanish press into a frenzy.

The 72 hour student strike called by the Sindicato de Estudiantes entered its second day and culminated in a demonstration of 200,000.

A child was knocked over and injured by a speeding police vehicle in Tarragona and the state forces continued using tear gas and baton charges against people on numerous demonstrations causing many injuries. Also, around 200 Spanish fascists organised a counter-demo that resulted in vicious assaults against pro-independence protesters.

The movement is taking place throughout Catalonia. In every town and city, large demonstrations call for the release of nine demonstrators arrested on Tuesday. In Girona, police charged a demonstration wielding their long batons indiscriminately.

In Gran Via, one of the major central streets in Barcelona, the press reported that demonstrators are ‘taking the streets’. Avenida Diagonal was also blocked with burning barricades. Even the local police admitted that the CDR (Committees in Defense of the Republic) had mobilized 22,000 demonstrators in Gran Via.

Demonstrators carried toilet roll because “there is a lot of shit to clean up!”

Five demonstrations or columns are marching en route from every corner of Catalonia, galvanizing the whole country as they march on Barcelona in preparation for the general strike on 18 October.

There can be no illusions about PSOE (Spanish Socialist Workers Party). Pedro Sanchez’s caretaker government is sending thousands of extra police to Catalonia and the president himself is the one coordinating the media campaign to condemn those demonstrating as “violent agitators”.

The 10 November general election will be a toxic fight between PSOE, PP, Ciudadanos and Vox to present themselves as the most patriotic defenders of one unified Spanish state. The left around PODEMOS and Izquierda Unida have a golden opportunity to be on the correct side of history and support the democratic right of the Catalan people to decide on their own future, and draw out the social and economic issues which underpin the move towards independence, alongside the historic national oppression of Catalonia and other nationalities. Unfortunately, the Catalan masses are well to the left of these official ‘left’ leaders.

Pablo Iglesias continues in his pathetic role of useful ‘left’ idiot for the Spanish capitalists in relation to Catalonia. On Monday, he stated that the sentence, even though he did not like it, would have to be accepted. On Wednesday, after meeting Sanchez, Iglesias offered full cooperation to the government to help ‘deflate’ the situation and called for ‘dialogue’.

What kind of dialogue is possible with a government and state machine which locks up politicians for a decade for organizing a referendum and which is sending National police reinforcements to Catalonia? They have already sent an extra 2,000 police including 200 from four ‘special’ (brutal) riot squads. The police had injured over a 100 people by Tuesday.

The Spanish state clearly understands what is at stake – the potential for a revolutionary explosion – and is prepared to settle the Catalan question on the streets with force and these are the people Iglesias proposes to sit down with! In reality, the Spanish state is afraid of the mass movement and the street. They are trying to clamp down on any possible public events where protests could break out.

In football, as usual Javier Tebas, the La Liga President, Real Madrid fanatic, ultra Spanish nationalist and ex-member of the fascist Fuerza Nueva, jumped to ‘defend Spain’ and proposed that the Barça vs Real Madrid match on 26 October be played in Madrid! FC Barcelona has correctly refused the kind offer but La Liga insisted the match be played in December as they fear a 100,000 strong protest against the Spanish state in Camp Nou (Barcelona stadium) next week.

The tactic of all the major parties of the Spanish state is to throw up the smokescreen of ‘violence’ to divert from the fundamental question of the righteous anger at the sentences and the right of the Catalan people to decide the future of Catalonia. PSOE said in an official statement: “the violence is organized by extremist groups on the streets’.

The Spanish state is preparing to use its apparatus to put down the protests and the movement must be prepared for the Catalan government to ultimately collaborate with them. The spokesperson of the Catalan government, Meritxell Budó said that although they sympathized with the protesters they were obliged to ‘maintain order’. In fact the Catalan regional police, the Mossos d’Esquadra are coordinating fully with the Spanish police and used water cannon on the demonstrations on Wednesday.

Again and again the Catalan governing parties have shown they will always try to get the people off the streets so they, the ‘professional politicians’ can negotiate with Spain. The experience of the last two years since the referendum by the mass of people of the role of the leaders of the capitalist pro-independence leaders, including their implementation of vicious cuts, means they correctly distrust the ERC and JxCat leaders.

Public sector and teachers’ unions have been fighting the cuts imposed by the Catalan government. The central lesson of the last 2 years is that only mass, revolutionary struggle from below, based on the power of the working class, can implement the result of the October 2017 referendum and win a socialist republic in Catalonia.

The next steps – continuous struggle, strikes, occupations and the building of workers’ unity with assemblies from below.

It is vital that the organized working class puts its stamp on events to give a clear and powerful expression to the anger. CSC-Intersindical and Intersindical Alternativa de Catalunya (IAC) and the CGT have already supported the general strike and demonstration called for 18O (18 October). The movement must lead a bold campaign to achieve the biggest participation of workers organized under the bigger union federations, the CCOO and UGT, if necessary over the heads of their leaders.

It is extremely significant that two heavy battalions of the Catalan working class are now entering into the fray. 9,800 seat car workers have agreed to strike on 18O and the leader of the dockers’ union in the Port of Barcelona announced that the workers will also strike for 12 hours in protest at the violation of democratic rights by the sentence.

18O is a massive step forward for the movement but the working class and youth must find a way to grab control of their own destinies.

Socialismo Revolucionario (our sister group in the Spanish state) is agitating along with other forces for mass meetings to be convened in study centers, universities, work centers and neighborhoods. There is an urgent need for local democratic committees – revived CDR, this time extended into workplaces and coordinated democratically on a regional and national level – to give direction to the movement. This is too important to leave in the hands of professional capitalist politicians who unfortunately have shown in the past that they prefer the people to leave the streets.

Democratically organized local committees need to be linked up throughout Catalonia to seriously develop the struggle and become the real leadership of the movement. This is also one of the key lessons we drew from the 2011 ‘Indignados’ movement and the class struggles which exploded in the following years. We have power on the streets, in the workplaces, and in democratic assemblies to decide our own future. However, without democratic structures this power cannot be fully reflected in the leadership of the movement.

We argue the need for continuous struggle based on an action plan on the streets and in workplaces, with occupations and a series of regular and escalating general strikes. Coordinated plans for self-defense against the violence of the police forces and fascist groups are also necessary.

The leaderships of the main Spanish trade unions, CCOO and UGT, at this stage are a barrier to building the strikes. This means we must build from below and push those trade unions into action or push them aside via democratic assemblies and committees bringing workers together from all unions.

The movement must discuss what kind of independence we are fighting for. There is little point in winning independence if the next day, cuts and austerity continue. The workers and youth of Catalonia are revolting against the repression of the Spanish state and for the right to decide their future. We defend a free Catalonia not only from state repression but also from all economic and social oppression, the end of the 78 regime and the capitalist system that sustains it. Winning all Catalan workers with these demands and inspiring workers throughout the Spanish state to struggle against the same enemies is vital to victory.

Let us be clear this is a movement of revolutionary potential and for that to succeed, we must build political organizations able to analyze, organize and direct the movement towards revolutionary victory. SR is not that yet, but we call for the collaboration of genuine forces that fight for revolutionary socialism to work together in the movement to fight to successfully change society in Catalonia and across the world along socialist lines.

-For the building of popular assemblies from the base to lead the movement!
-For an end to austerity, pension cuts and for a radical socialist program!
-Organize solidarity action throughout the Spanish state and internationally!
-Free the Catalan political prisoners!
-Defend democratic rights!
-For the right to self-determination!
-For a Catalan socialist republic!
-For a free and voluntary confederation of the peoples of the Spanish state and the Iberian Peninsula, as part of a socialist confederation of Europe!