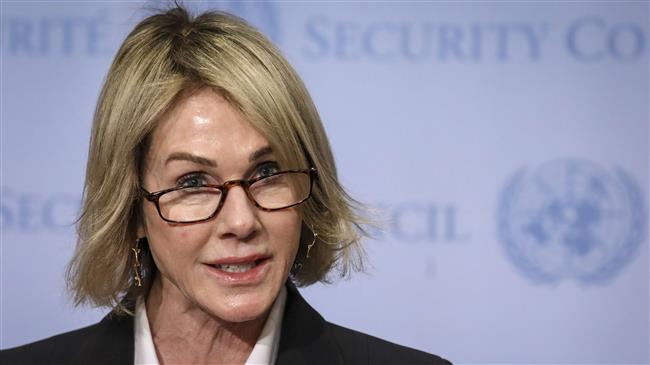 The United States’ ambassador to the UN warns Palestinians against raising opposition at the world body to a US-hatched scheme, which Washington claims seeks to resolve the age-old Palestinian-Israeli conflict, but Palestinians have unanimously spurned.

“Bringing that displeasure to the United Nations does nothing but repeat the failed pattern of the last seven decades. Let’s avoid those traps and instead take a chance on peace,” Kelly Craft alleged in remarks to Reuters on Friday.

“Why not instead take that displeasure and channel it into negotiations?” she asked.

Washington had announced the plan — a brainchild of US President Donald Trump’s son-in-law and advisor Jared Kushner and other key pro-Israeli figures — years ago, but had withheld the details.

Trump announced the general provisions of the scheme, which he has controversially dubbed “the Deal of the Century,” on Tuesday, with Israeli prime minister Benjamin Netanyahu at his side. Palestinian sides were conspicuous by their absence at the ceremony given their vociferous disagreement to the plot.

The US president reiterated his hugely-contentious recognition in late 2017 of the holy occupied city of Jerusalem al-Quds as Israel’s “undivided capital,” although Palestinians have historically wanted the city’s eastern part as the capital of their future state.

He said the deal featured an economic portion that earmarks $50 billion in monetary allocations to Palestinians, Jordan, and Egypt. Palestinians have denounced this as a means of bribing them into selling their rights.

Still contentiously, Trump said that the Israeli settlers, who have been housed in illegal apartment blocks since Tel Aviv’s occupation of the Palestinian territory of the West Bank in 1967, would not be moved under the deal.

The US president, meanwhile, alleged that Israel would be freezing its settlement activities for four years “while Palestinian statehood is negotiated.” Tel Aviv has never fully committed to such freezes, causing any negotiation process to break down.

Mahmoud Abbas, the president of the Palestinian Authority, which is headquartered in the West Bank city of Ramallah, and all other Palestinian officials wasted no time in repeating their objection to the US plot after Trump’s remarks.

RELATED CONTENT: Trump Gives Away the Store and Israel Will Now Officially Become an Apartheid State

Also on Thursday, Palestinian UN envoy Riyad Mansour said, “There is not a single Palestinian official [who] will meet with American officials now after they submitted an earthquake, the essence of it [is] the destruction of the national aspirations of the Palestinian people. This is unacceptable.”

Earlier, he had announced that Abbas would be speaking at the UN Security Council in the next two weeks about the US plan.

The envoy also said he hoped that the 15-member Council would vote on a draft resolution against the scheme.

However, Washington, which has unexceptionally used its veto power in favor of Israel at the Council, is almost certain to cast its veto against any such resolution too.

Israel’s UN mission, meanwhile, asserted that it was “working to thwart these efforts,” referring to upcoming Palestinian efforts to confront the US scheme at the UN. The Israeli team also vowed that it “will lead a concerted diplomatic campaign with the US” to stymie the Palestinian bid.

The Palestinians would then take their objection up with the UN General Assembly, where Washington cannot strike down any unanimously-approved resolutions.