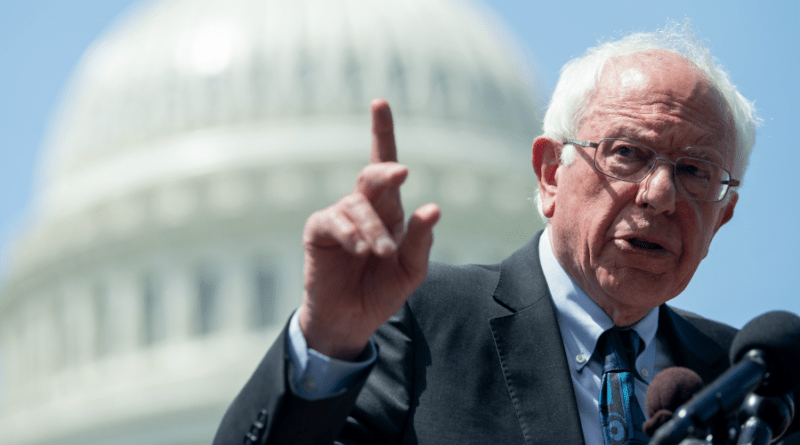 “Trump’s so-called ‘peace deal,'” warned the White House hopeful, “will only perpetuate the conflict, and undermine the security interests of Americans, Israelis, and Palestinians.”

After U.S. President Donald Trump on Tuesday unveiled his long-awaited “peace deal” for the Israel-Palestine conflict, Sen. Bernie Sanders condemned the proposal as “unacceptable” and called for an end to Israel’s decades-long occupation of Palestinian territories.

Sanders (I-Vt.), a top candidate in the Democratic Party’s 2020 presidential primary race, responded to Trump’s plan in pair of tweets, envisioning a U.S. policy that promotes “a just and durable agreement.”

The United States can bring unequaled leadership to resolving the Israeli-Palestinian conflict, but we must use that leadership to promote a just and durable agreement. Any acceptable peace deal must be consistent with international law and multiple UN resolutions.

RELATED CONTENT: Trump Gives Away the Store and Israel Will Now Officially Become an Apartheid State

The tweets aligned closely with a statement from the senator’s office, in which Sanders said any acceptable deal “must end the Israeli occupation that began in 1967 and enable Palestinian self-determination in an independent, democratic, economically viable state of their own alongside a secure and democratic state of Israel.”

Sanders, who would be the first Jewish president, added that “Trump’s so-called ‘peace deal’ doesn’t come close, and will only perpetuate the conflict, and undermine the security interests of Americans, Israelis, and Palestinians.”

The White House hopeful’s comments Tuesday were not the first time Sanders has spoken out in recent months for the Palestinian people. In October 2019, the senator suggested using the billions of dollars in military aid that the United States supplies to Israel each year to pressure Netanyahu’s government to end its horrific treatment of Palestinians.

The following month, Sanders was praised by progressives for saying during the Democratic presidential debate that “we must treat the Palestinian people with the respect and dignity they deserve.”

Sanders was far from the only lawmaker to decry Trump’s new plan, which was drafted under the direction of Jared Kushner—the president’s son-in-law and senior adviser—and unveiled at the White House with Israeli Prime Benjamin Netanyahu.

Sen. Elizabeth Warren (D-Mass.), one of Sanders’ rivals in the primary race, tweeted Tuesday that “Trump’s ‘peace plan’ is a rubber stamp for annexation and offers no chance for a real Palestinian state.”

“Releasing a plan without negotiating with Palestinians isn’t diplomacy, it’s a sham,” Warren added. “I will oppose unilateral annexation in any form—and reverse any policy that supports it.”

As Warren noted, Palestinian leaders have not been involved with crafting Trump’s deal. Palestinian Authority President Mahmoud Abbas said in a televised address Tuesday: “I say to Trump and Netanyahu: Jerusalem is not for sale, all our rights are not for sale and are not for bargain. And your deal, the conspiracy, will not pass.”