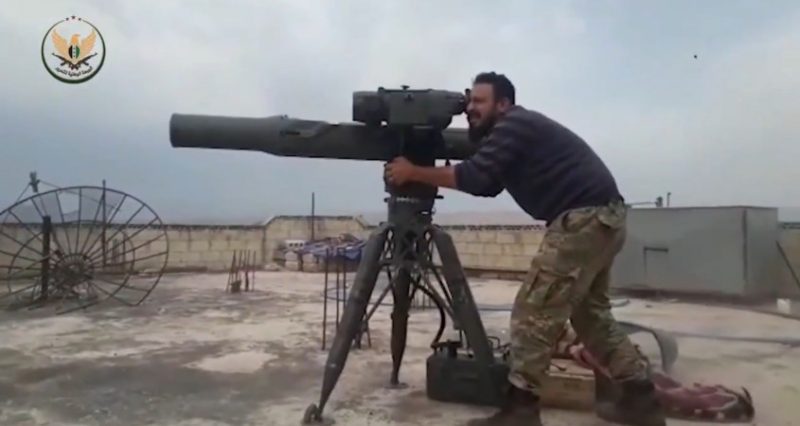 While the US corporate media continues propagating the conspiracy theory that Donald Trump is a secret Kremlin asset, the Trump administration has approved heavy weapons for al-Qaeda-allied, Turkey-backed militants to fight against a Russian-backed offensive in Syria.

The Syrian army has relaunched a campaign to retake the northwestern province of Idlib, which has been under the control of Syria’s al-Qaeda affiliate for more than four years. Washington has responded by greenlighting a cache of US-made anti-tank missiles, rocket launchers, and armored vehicles sent from NATO ally Ankara to sectarian Islamist militants in Idlib.

Syria’s ally Russia had negotiated a peace deal with Turkey in September 2018. Ankara is militarily occupying part of northern Idlib, and the NATO member has constructed a dozen military bases in the Syrian province. But after seven months, Turkey and its rebel proxies have still failed to uphold their side of this peace agreement.

Under the deal, the Syrian government was supposed to regain access by the end of 2018 to major highways running through Idlib that were partially controlled by Islamist rebels. But Damascus still does not have authority over these critically important roads.

The peace agreement additionally stipulated that extremist militants in a demilitarized zone on the edge of Idlib were not allowed to launch attacks on Syrian government-held territory. Yet these Salafi-jihadist rebels have continued indiscriminately attacking civilian territories that are controlled by Damascus.

Frustrated with Turkey’s failure to fulfill the peace deal, the Syrian army and Russian military decided to re-initiate their joint campaign to retake Idlib. In April, Moscow began a series of airstrikes; and in early May, Damascus kicked off a ground offensive.

The Trump administration immediately condemned this Syrian-Russian campaign to retake Idlib from al-Qaeda militants. US officials also claimed, without providing any evidence, that the Syrian army was using “chemical weapons” in the offensive. (This unsubstantiated accusation came at the same time when a leaked OPCW report suggested that a previous gas attack in Douma, Syria had actually been staged.)

A US government official also said that Washington “greenlighted” the use of devastating anti-tank TOW missiles by Turkey-backed Islamist rebels in Syria.

Reuters reported on May 25 that Turkey has ramped up its weapons supplies to the al-Qaeda-linked militants that occupy Idlib. The Turkish military has also sent a convoy to a military base in rebel-held territory north of the Syrian city Hama.

“Ankara stepped up supplies in recent days after failing to persuade Russia in recent meetings of a joint working group that it should end its escalation,” Reuters reported, adding, “In doing so Turkey signalled its readiness to preserve its influence in northwestern Syria, where it has beefed up its troop presence in a dozen military bases that were set up under a de-escalation deal with Russia.”

The TOW missile had been the most potent weapon in the arsenal of rebel groups battling Assad during the conflict. It was extended by Western and Arab foes of Assad until a CIA-led programme of military support to help moderate rebels was suspended in 2017.

A Western intelligence source said Washington had given a ‘greenlight’ for the Turkey-backed mainstream rebels to use the TOW missiles, which had been in storage in the latest campaign.”

Ankara is sending these American-made heavy weapons to sectarian Sunni Islamist rebels from a coalition that calls itself the National Liberation Front. This alliance, which was founded in May 2018 and which purports to be “moderate,” claims to be part of the so-called Free Syrian Army (FSA), and often fights embedded directly within the Turkish army.

This “moderate” FSA coalition is led by commanders from the Salafi-jihadist militias Ahrar al-Sham and Jaysh al-Ahrar. It also includes former al-Qaeda ally Nour al-Din al-Zenki (which is notorious for beheading pro-government fighters, and which was directly armed by the CIA.)

This is not the first time American anti-tank missiles have ended up in the hands of Syria’s extremist rebels. In March 2017, The Grayzone published video and photographic evidence that showed rebranded al-Qaeda using US-made anti-tank missiles to attack Syrian government-held territory.

Idlib was first captured by Syria’s al-Qaeda affiliate Jabhat al-Nusra and other Takfiri allies in March 2015. Al-Nusra immediately proceeded to massacre the Druze minority and besiege nearby Shia-majority villages.

Even the pro-rebel lobbyist Charles Lister admitted in 2017 that Idlib is the “heartland of al-Nusra.”

Today, the majority of Idlib remains under the control of a rebranded version of Jabhat al-Nusra that calls itself Hayat Tahrir al-Sham (HTS). This far-right extremist group, which has imposed harsh sectarian Islamic law on a once diverse and secular region, has skirmished on and off with Turkey and its rebel proxies to the north.

The analyst who runs the Within Syria blog highlighted a recent discussion on a Telegram channel from Idlib in which supporters of the Turkish-backed FSA militants debated with supporters of HTS whether or not they should wage a terror war on the civilian population:

“Should we bomb kindergartens, schools in gov areas? or should we poison the drinking water in the coast? or bomb markets and hospitals? or do all of this?”

A discussion in an Idlib-based observatory on Telegram between FSA and HTS supporters: Should we bomb kindergartens, schools in gov areas? or should we poison the drinking water in the coast? or bomb markets and hospitals? or do all of this? pic.twitter.com/21VLU1OFQS