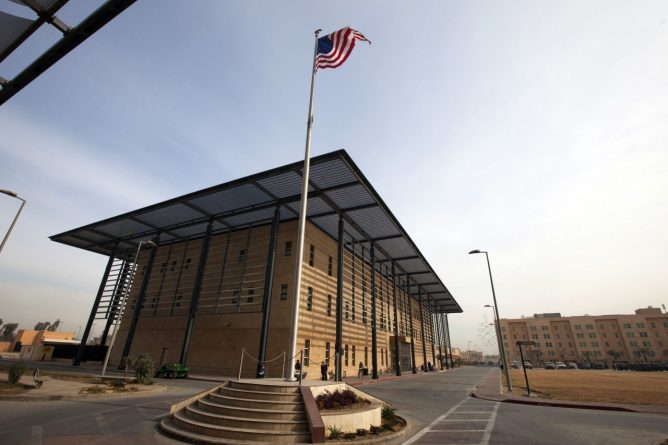 Alert comes after Washington said it had detected new and urgent threats in region.

The US State Department have ordered all non-emergency government staff to urgently leave Iraq amid escalating tensions with neighboring Iran, as Germany and the Netherlands both suspended military training operations in the country.

An alert published on the US embassy in Iraq’s website said employees nationwide should depart “as soon as possible” and avoid American facilities in the country.

It followed a warning over the weekend that advised Americans to avoid travelling to Iraq because of “heightened tensions” in the region.

Now, non-emergency government employees posted at both the embassy in Baghdad and the consulate in Erbil have been ordered to leave by the State Department, which said that visa services at both posts had been suspended and the US government had a “limited ability” to provide emergency services to its citizens in Iraq.

RELATED CONTENT: Oil Rises Amid Tensions Between the US and Iran

Without elaborating, a spokesperson said the decision to withdraw staff was based on a security assessment. He would not give details on how many personnel were leaving Iraq.

“Ensuring the safety of US government personnel and citizens is our highest priority and we are confident in the Iraqi security services’ [ability] to protect us,” he added. “But this threat is serious and we want to reduce the risk of harm.”

The UK has not moved to reduce its staff numbers, although foreign secretary Jeremy Hunt said earlier this week that the British government was ”very worried about the risk of a conflict happening by accident, with an escalation that is unintended really on either side but ends with some kind of conflict. What we need is a period of calm to make sure that everyone understands what the other side is thinking.”

Maria Adebahr, a spokesperson for Germany’s foreign ministry said the country had not reduced its staff in either Iraq or Iran, while in the Netherlands, state broadcaster NOS said its 50-person military mission in Iraq was halted “until further orders”. It quoted a Defence Ministry spokesperson as saying he couldn’t elaborate on the threats.

Washington said last week said it had detected new and urgent threats from Iran and its proxy forces targeting Americans and US interests in the region, prompting fears in Tehran that the US was edging closer to war.

The American military last week deployed an aircraft carrier and warplanes to the Gulf, and announced it would also install an air defence missile system in the region – a show of force Iran has called “psychological warfare”.

Tensions escalated further when the US blamed Tehran or its allies for damage to four oil tankers off the United Arab Emirates.

Washington has not publicly provided any evidence to back up claims of an increased Iranian threat, and a British general has expressed scepticism over the need for the American military buildup in the Middle East.

But US Central Command, in a rare rebuke of an allied military officer, said his remarks ran “counter to the identified credible threats” from Iran-backed forces.

“[The coalition] is now at a high level of alert as we continue to closely monitor credible and possibly imminent threats to US forces in Iraq,” it added in a statement.

Donald Trump earlier denied a report that his administration was considering sending 120,000 troops to the Middle East. But the US president then stirred the controversy further by saying: “Would I do that? Absolutely.”

Mike Pompeo, the US secretary of state and Iran’s supreme leader Ayatollah Khamenei have both stressed they do not want war.

House speaker Nancy Pelosi has also said that the US must avoid war with Iran and she declared the White House has “no business” moving towards a confrontation without approval from congress.

Ms Pelosi’s remarks to members of her Democratic Party came amid growing concerns in congress over Mr Trump’s approach to Iran. Senior congressional leaders are expected to receive a classified briefing from the administration later this week but Ms Pelosi said the administration had resisted a wider briefing for all politicians and congressional requests for more information.

A Trump administration official said a recent small meeting of national security officials was not focussed on a military approach to Iran, but instead concentrated on a range of other policy options, including diplomacy and economic sanctions.

Mr Trump has stepped up sanctions pressure on Tehran by ending waivers for some countries to purchase Iranian oil – part of efforts to roll back the Islamic Republic’s expanding regional clout.