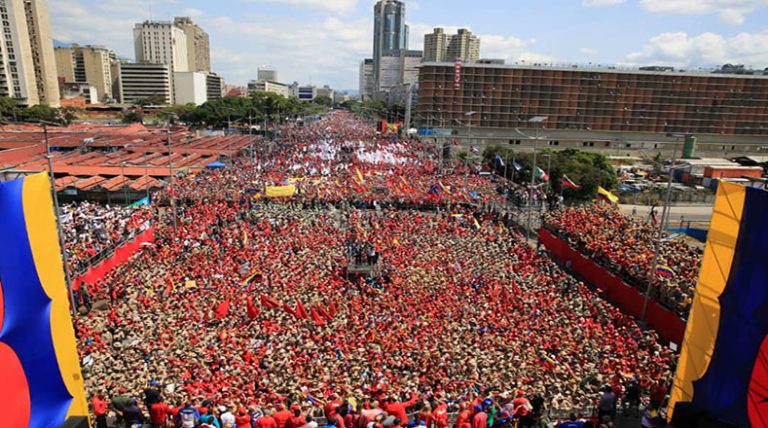 The Task Force on the Americas condemns the false criminal charges by the US government against fourteen high-ranking Venezuelan officials for alleged involvement in international drug trafficking. The US government has, in effect, put a $15 million bounty on Venezuelan President Maduro and bounties of $10 million each for the head of the National Constituent Assembly and other leading officials and former officials.

The US claims that Venezuelan officials are conspiring to “flood the United States with cocaine” are unsubstantiated and bogus. Even WOLA, a Washington-based think tank that supports regime change for Venezuela, found in a recent detailed report using the US government’s own data that the facts do not support such claims. The authoritative US interagency Consolidated Counterdrug Database reports, in fact, that 93% of US-bound cocaine is trafficked through western Caribbean and eastern Pacific routes, not through Venezuela’s eastern Caribbean coast.

RELATED CONTENT:  Beyond Chutzpah: US Charges Venezuela with Narco-Terrorism (See the Map)

The US charges of drug trafficking against Venezuela are also the height of hypocrisy. The world’s leading source of illicit cocaine is the US client state of Colombia; the world’s leading source of heroin is US-occupied Afghanistan, and the US is the world’s largest cocaine market. The president of Honduras, the latest in a line of corrupt presidents since the 2009 US-backed coup there, was identified as an unindicted co-conspirator in October by a US federal court for smuggling multi-million dollars’ worth of cocaine into the US. And that’s only scratching the surface of the US’s history of complicity in international narcotrafficking, including the Iran-Contra scandal.

US Attorney General Barr’s indictments of March 26 against the government of Venezuela are a ramping up of a policy of regime change to replace the democratically elected president with Juan Guaidó (himself associated with a Colombian drug cartel) chosen by the US. Ever-tightening unilateral coercive measures by the US have created a blockade, costing Venezuela over 100,000 lives.

This latest escalation of the US hybrid war takes place within the context of the global coronavirus pandemic, which the US empire sees as an opportunity to further attack the Venezuelan people made more vulnerable by the health crisis. Indeed, the US State Department has declared “Maximum-pressure March” against Venezuela. Meanwhile, Cuba, Russia, and China are all supporting the Maduro government’s successful efforts to contain the spread of COVID-19.

The Task Force on the Americas demands that the US government: