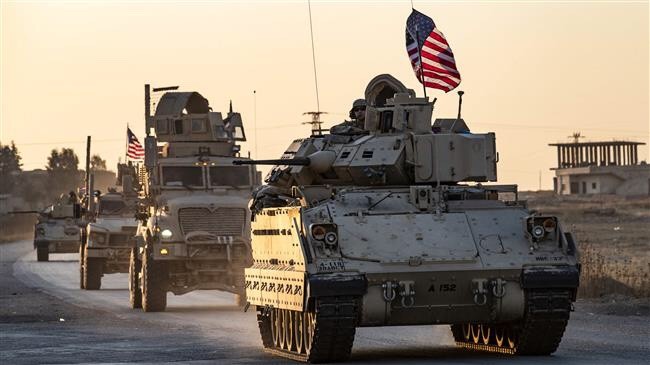 A large US military convoy has entered oil fields in northeastern Syria despite widespread condemnation of the deployment as being tantamount to robbery.

The United States sent new deployments to the Syrian provinces of Hasakah and Dayr al-Zawr from neighboring Iraq on Sunday, according to the state-run Al-Ikhbariya TV.

RELATED CONTENT: India’s Government is Going to War Against Its Own People

The US vehicles were carrying logistical equipment that would be provided to the so-called Syrian Democratic Forces (SDF), a Kurdish militant group, in the eastern countryside of Dayr al-Zawr.

According to the report, the deployment is the second of its kind in less than a month.

Earlier this month, the US army deployed armored vehicles, pickups, heavy construction equipment and about 150 rigs to the region.

RELATED CONTENT: Why Labour Lost the Elections, and Where We Go From Here

The deployments come after President Donald Trump said in October that the US troops would remain in Syria to “secure” the oilfields there. Damascus as well as regional movers and shakers voiced their strong opposition to Trump’s decision to seize Syrian oil fields.

Russian Foreign Minister Sergei Lavrov reiterated that US attempts to control Syria’s oil fields were “illegal” and amount to “robbery.”

Trump’s decision came after he initially ordered the withdrawal of all US troops from northeastern Syria, clearing the path for a Turkish incursion into the region. Ankara says it wants to eliminate Kurdish YPG militants which it regards as terrorists affiliated with the homegrown PKK militant group.

The developments come as Damascus is in great need of its major oil deposits in order to address its energy needs and rebuild the country amid crippling Western sanctions.

Syria is currently extracting oil at only 10 percent of its pre-war capacity.

Featured image: A convoy of US military vehicles drives near the town of Tal Tamr in the northeastern Syrian province of Hasakah on the border with Turkey, on November 10, 2019. (Photo by AFP)