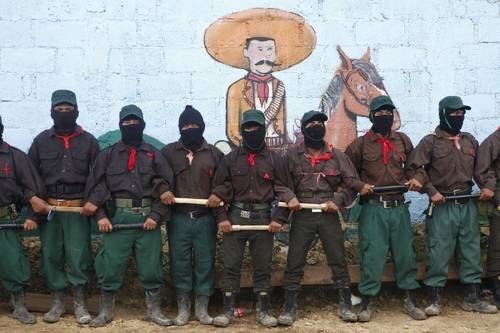 San Cristobal de Las Casas, Chis. The National Indigenous Congress (CNI), the Indigenous Council of Government (CIG) and the Zapatista Army of National Liberation (EZLN), affirmed that “the bad federal government simulates consulting the native peoples” to “impose the Mayan train – which delivers the indigenous territories to big industrial and tourist capital ”-, the Morelos Integral Project (PIM) and “the megaprojects of death that reconfigure our country to make it available to multinational capital, mainly imposing the terrorist power of the United States”.

They warned that “we resist and fight because we are alive, because, although we are afraid of ceasing to exist as what we are, that is not the way we choose for ourselves, for ourselves and for those whom we are responsible.”

The document was announced at the end of the fourth national assembly of the CNI and the IGC, held in this city on the 18th and 19th of this month, with the presence of representatives of the Afro-Mexican, Binizaa, Chinanteco, Chol, Chontal, Comca ‘ ac, hñahñu, kumiai, mam, maya, may, mazahua, me´phaa, mixe, mixteco, nahua, náyeri, purépecha, quiche, rarámuri, téenek, tepehuano, tohono odam, tojolabal, totonaca, tzeltal, tzotzqui, wixárika, wixárika , zoque, chixil, cañari and castellano, from 24 states of the republic, as well as guests from Guatemala, Ecuador, El Salvador and the United States.

“We meet to see and understand the neoliberal war that is covered with lies pretending to govern, when they put the country in the hands of big capital, which hinders the collective conscience of the peoples and starts their dispossession machinery: A thorough bloodthirsty and terrorist violence against the peoples that defend the land,” they said.

RELATED CONTENT: UN-Haiti Sex Scandal: “They Put a Few Coins in Your Hands to Drop a Baby in You”

They said that “the mourning and rage that inhabits us who are today, is for the damage to Mother Earth, the spoiling of all forms of life. And those who decided to destroy it to convert it into money have a name and surname, as well as the murderers of our compañeros. ”

They added: “We are hurting in a collective heart the murder of the CNI popoluca fellow delegate, Josué Bernardo Marcial Campo, also known as Tío Malo, who for his art, his music and his protest against the megaprojects that the bad government claims to have finished, as is fracking, he was disappeared and found brutally murdered last Monday, December 16”.

They affirmed that “our peoples, nations and tribes will continue to care for and defend the seeds of resistance and rebellion in the midst of death. Building a path that will last in the midst of darkness; and we, we will be there to heal our mother earth, together with the peoples of the world.”

“Our partners were killed for opposing the war with which the bad government intends to take over our lands, mountains and waters, to consolidate the dispossession that threatens our existence as native peoples,” he says.

In a joint statement they said that “to advance in their war, the bad government bets on the dismantling of community fabrics, by promoting internal conflicts that stains communities with violence, between those who defend life and those who decided to put a price on it, even at the cost of selling future generations for the millionaire benefit of a few corrupt, who are served by armed groups of organized crime.”