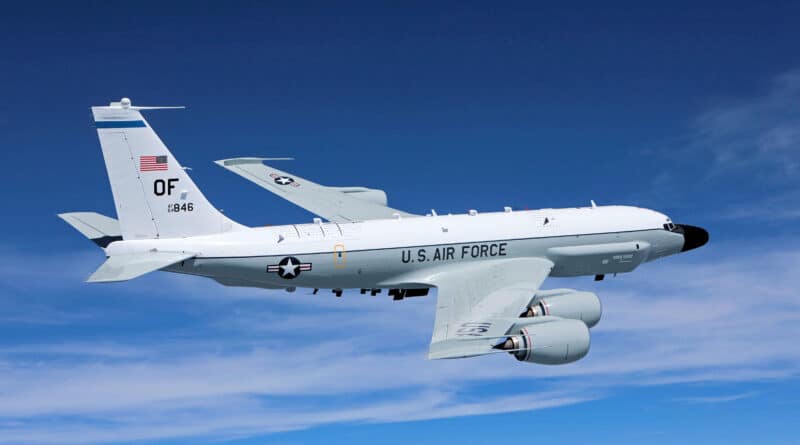 This Monday, April 12, it was reported that a United States Air Force (USAF) plane flew over the airspace that comprises the Colombian-Venezuelan border on the Colombian side, where the Bolivarian National Armed Force (FANB) recently expelled Colombian narco-paramilitary groups.

The details were reported through social media networks by journalists and specialized aeronautical accounts, which indicated that it was a Boeing RC-135W RIVET JOINT (R135) REG 62-4139, Alias ​​HORN41.

The plane, according to the Patriota Cazador account on Twitter, took off from Lincoln, Nebraska, and left for Colombia, heading to the frontier on the Arauca River. Its GPS transmitter had no information about its final destination.

Last Friday, April 2, some US military cargo planes arrived in Colombia, allegedly for an administrative support mission to the US Embassy in the South American country, just over a week after the confrontations between the FANB and the Colombian paramilitary gangs.

According to Wikipedia, the Boeing RC-135 is a family of large reconnaissance aircraft used by the United States Air Force and UK Royal Air Force “to support theater and national level intelligence consumers with near real-time on-scene collection, analysis and dissemination capabilities.”

NASA candid photo and Paraguana oil refineries
Coincidentally, last Sunday, April 11, the US National Aeronautics and Space Administration (NASA) published on its Twitter account a satellite photograph of the Paraguaná peninsula in Falcón state, highlighting the topography and beauty of its beaches, abundant in sand.

RELATED CONTENT: This is How the Venezuelan Army Dialogues Face-to-Face with those Returning to Apure from Colombia

The Paraguaná Peninsula in #Venezuela is rich with sandy beaches and interesting topography. https://t.co/cgrNDNxvwU pic.twitter.com/7PCiwKZcTT

In the tweet, NASA republished a photograph taken last year by the Landsat 8 satellite, and commented that “the Paraguaná peninsula is rich in sandy beaches and has an interesting topography.”

In the photo you can see locations such as Punto Fijo, Los Médanos de Coro National Park, the city of Coro, the Gulf of Coro, and the Santa Ana hill, all framed in the dark and deep blue of the waters of the Caribbean Sea.

What NASA did not mention is that near Punto Fijo there is the biggest oil refining facility in Venezuela, the Paraguaná Refining Complex (Cardon, Amuay and Bajo Grande refineries), run by US-sanctioned PDVSA, and a refinery where a few months ago a US citizen accused of spying for the CIA was captured by Venezuela authorities with explosives, weapons, satellite phones, and cash.

Featured image: A US Boeing RC-135 reconnaissance jet similar to this one was reported near the border of Venezuela, in the State of Apure. File photo.