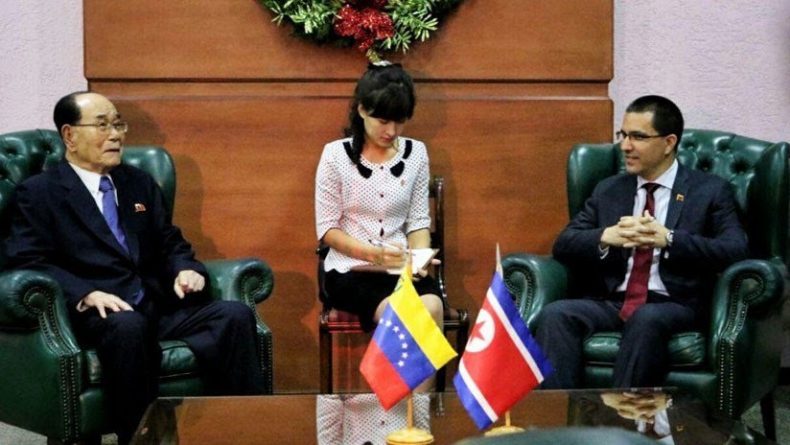 Both nations signed a memorandum of understanding in Caracas, in the context of the visit of Supreme People’s Assembly President Kim Yong Nam.

The governments of Venezuela and North Korea signed an agreement on Tuesday to establish political consultations during the Visit of the President of the Supreme People’s Assembly and Honorary President of the Democratic People’s Republic of Korea, Kim Yong Nam, to Caracas.

The signing of the agreements of mutual interest took place in the Miraflores Palace, headquarters of the Venezuelan government, with the presence of the high North Korean official and the Bolivarian Foreign Minister, Jorge Arreaza.

The Venezuelan Foreign Ministry, in its Twitter account, said that with the agreements, both countries ratify the joint effort “for a multipolar world and respect for the self-determination and sovereignty of peoples.” One of the agreements is a memorandum of understanding on the establishment of political consultations between both nations.

Kim Yong Nam arrived in Caracas on Monday to strengthen “diplomatic, economic and commercial relations,” as part of a tour of Latin America that includes stops in Cuba and Mexico, the Venezuelan Foreign Ministry said. After the signing of the agreements, the Venezuelan president, Nicolás Maduro, will meet with the head of the North Korean parliament and the delegation that accompanies him.

| Working meeting with Kim Yong Nam, President of the Presidium of the Supreme People’s Assembly of the Democratic People’s Republic of Korea, to draw up strategies that project the common development of our peoples. https://www.pscp.tv/w/1YqKDymRPdkGV