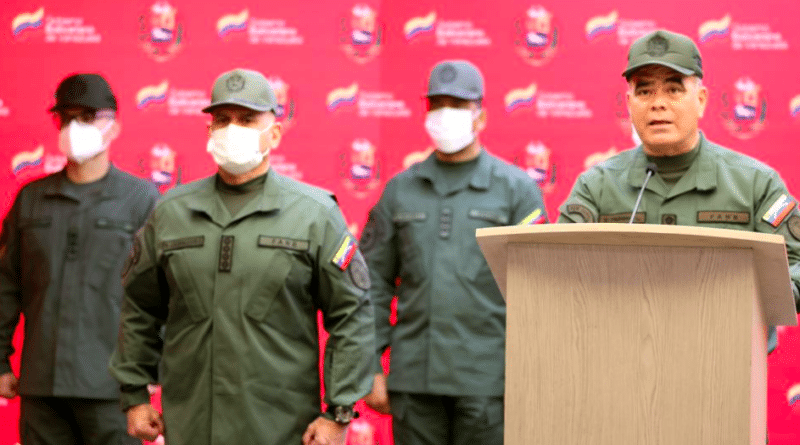 Eight members of the Bolivarian National Armed Force (FANB) were abducted by armed criminal groups from Colombia that entered Venezuelan territory through the international border in Apure state. The incident occurred during full combat actions that had been implemented since late March this year in defense of national sovereignty. The information was communicated to the country this Saturday afternoon by the Minister for Defense, General in Chief Vladímir Padrino López, who read out an official statement broadcast through state media Venezolana de Televisión (VTV).

Padrino López further informed that on May 9, the illegally apprehended soldiers sent proof that they are alive. He declared that ”in response to this situation, we denounce these actions before the international community and the multilateral organizations, and human rights organizations as well.” He added that the Venezuelan authorities ”demand that the captors preserve the lives and the physical integrity of our soldiers.”

Mediation through International Red Cross
In addition, the top military official assured that the FANB has established the necessary contacts for prompt release of the abducted soldiers. Simultaneously, the Foreign Affairs Ministry of the Republic is coordinating with the International Red Cross Committee so that the organization may ”serve as intermediary in the recovery of our soldiers.”

”We declare unconditional solidarity and complete support for the families of our brave comrades in arms, who, in a gallant and stoic way, continue to honor their sacred oath to defend our homeland,” expressed Padrino López. ”We will spare no effort and we will exhaust all possible channels to recover them safe and sound.”

Government of Colombia protects terrorist organizations
Moreover, in his capacity as sectorial vice-president for Political Sovereignty, Security and Peace, Padrino López emphasized that the terrorist organizations, carrying out drug trafficking, abduction and extortion, have benefited from the inaction and acquiescence of the Colombian government.

The minister decried that such criminal groups use ”murderous and cowardly methods, such as antipersonnel mines and explosives detonated from a distance.” These, he specified, have caused the death of a number of military personnel and seriously injured others, some of them being victims of limb mutilation and permanent incapacitation.

The General in Chief was emphatic in reiterating FANB’s commitment to guaranteeing the territorial integrity and sovereignty of the Venezuelan nation. ”We will not tolerate lawless armed groups in any space of the national territory,” concluded Padrino López.

It must be noted here that the clashes in Apure have cost Venezuela the lives of more than a dozen armed professionals.