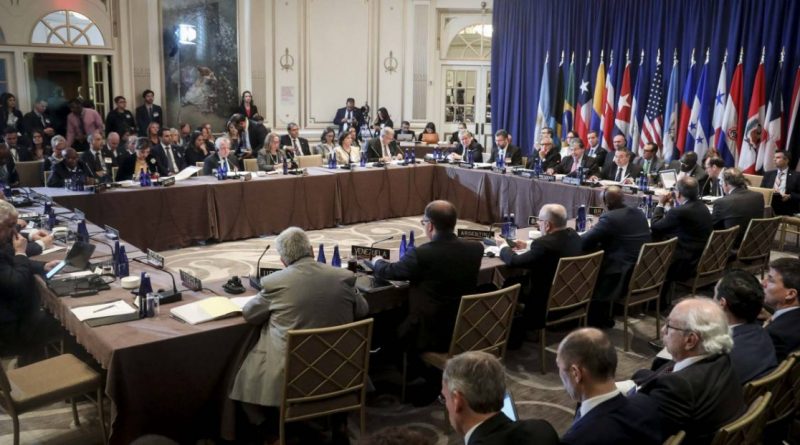 Colombian President Ivan Duque raised tensions on the eve of the UN General Assembly when he compared Maduro to Slobodan Milosevic and Al Qaeda.

For the government, Foreign Minister Jorge Arreaza and Vice President Delcy Rodriguez have stated that they will be urging action against climate change and poverty in the week-long assembly, as well as stressing the need to build a “multipolar world” and strengthen peace in the region. They are also planning on delivering to UN Secretary General Antonio Guterres 13.2 million signatures collected as part of the #NoMoreTrump campaign against US sanctions on Venezuela.

Guaido will be represented by his US envoy, Carlos Vecchio, “Foreign Relations Commissioner” Julio Borges, and “UN Commissioner” Miguel Pizarro, who was named by Guaido on Sunday. Pizarro, 31, is a First Justice deputy for Miranda State.

Vecchio has indicated that Guaido is “considering” attending the proceedings in person, despite Guterres ruling out a meeting with the opposition leader.

While Guaido’s representatives are not able to participate in the UN assembly, they are planning on contributing to a number of side activities, including meetings with countries that recognize Guaido as Venezuela’s legitimate president as well as UN High Commissioner for Human Rights Michelle Bachelet. The opposition has vowed to “increase pressure” on the Maduro government, with Borges promising via Twitter to “continue requesting sanctions.”

Guaido’s team also participated in Monday’s meeting of foreign ministers for signatories of the Inter-American Reciprocal Assistance Treaty (TIAR) which voted to formally invoke the treaty. The meeting, which was chaired by Colombia, also agreed to try to “capture” and extradite top Maduro government officials as well as freeze their assets in signatory countries.

The Organization of American States activated the TIAR Treaty procedures earlier this month after twelve member-states approved a Colombian resolution classing Venezuela as a “clear threat to peace and security in the region.” The move stoked fears of foreign military intervention in the Caribbean country.

Venezuela and a number of fellow left-leaning governments withdrew from the TIAR treaty in 2012.

Venezuela a hot topic
The coalition of right-wing regional governments opposed to Maduro known as the Lima Group also met on the sidelines of the General Assembly on Monday. The grouping threatened more sanctions against Venezuela, but fell short of backing military action.

Colombian President Ivan Duque has likewise sparked criticism in New York for his remarks in an activity with the local Colombian community hosted by New Jersey Democrat Senator Bob Menendez.

At the event, the hard-right president compared Maduro to former-Yugoslav leader Slobodan Milosevic as well as to the terrorist group Al Qaeda.

“For me, Nicolas Maduro is the Slobodan Milosevic of Latin America. What he has done against his people is a crime against humanity; but also for what he has done with the terrorist groups, by protecting them in his territory. This is only comparable to what the Taliban did with Al Qaeda,” he said. Caracas has yet to respond to his remarks.

Further evidence links Guaido to Colombian paramilitaries
The war of words between Caracas and Bogota is set to continue during the week, with Maduro’s government demanding that Colombia take action on the latest scandal engulfing Juan Guaido and the Colombian paramilitary group “Los Rastrojos.”

Venezuela’s attorney general opened an investigation into Guaido last week after photos surfaced showing the self-proclaimed “Interim President” with leaders of a notorious drug trafficking gang. Colombian human rights activists have pointed to Los Rastrojos as the group responsible for illegally transporting Guaido across the border and delivering him to Colombian authorities on the eve of the Venezuela ‘Live Aid’ concert on February 23.

The photos were reportedly taken by former Rastrojos member Ivan Pedrozo (alias “Nandito”) who has since fled the gang before being arrested in Venezuela’s Zulia State.

Attorney General Tarek William Saab informed that Podrozo’s parents and two other family members have been murdered in Colombia since his alleged defection, claiming that “they were murdered to keep them quiet.”

Venezuelan Communications Minister Jorge Rodriguez had previously claimed that Pedrozo’s testimony implicates Tachira opposition Governor Laidy Gomez, who is accused of planning and coordinating Guaido’s February border crossing. Arrest warrants were issued for Gomez’s assistant and the La Fria and Boca de Grita prefects on Monday, all of whom are being charged with treason. Gomez has denied the accusations.

Similarly, the Maduro government’s representative for the region, Freddy Bernal, revealed that alleged Rastrojos members Eliodoro Brito and Omar Pedrozo had both been arrested in Tachira State on Friday, while Germán Chacón and Luis Lopez died in a confrontation with police. Bernal also claimed that Venezuela’s armed forces have discovered and dismantled a Rastrojos communications base in Tachira’s capital of San Cristobal.

Featured image: The meeting of foreign ministers of the TIAR countries voted to invoke the treaty against Venezuela. (AP)