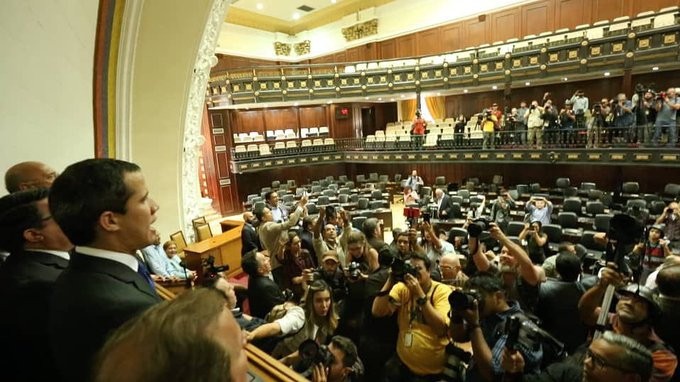 The Trump administration is reportedly mulling sanctions against opposition deputies who voted against Guaido.

The self-proclaimed “interim president” led a group of deputies in a standoff with security forces outside the Legislative Palace in Caracas, while the National Assembly (AN) held its regular session inside. The session was led by newly-elected AN President Luis Parra, who announced the creation of a commission to “restore” constitutional order.

The group forced its way past the police cordon and into the building after the AN session had ended. Guaido then opened a parliamentary session of his own, in which he was sworn in as “interim president” for another year. Footage circulated on social media suggested the parallel session did not have the required quorum of 84 deputies, with journalists appearing to outnumber lawmakers.

“This is a show of what can happen when we are united,” Guaido told reporters on Tuesday.

Venezuela’s 167-member legislative body has been at the center of controversy in recent days following leadership elections on Sunday. An opposition list headed by Yaracuy State Deputy Parra was elected with a reported 81 of 150 votes to replace the Guaido-led board.

However, Guaido loyalists rejected the process as invalid due to lack of quorum, going on to hold an ad-hoc meeting at the headquarters of the anti-government El Nacional newspaper. The group convened a parallel National Assembly and re-elected Guaido as president, with an alleged 100 votes, which included deputies abroad fleeing charges, as well as substitutes for the legislators who voted for Parra earlier Sunday.

Despite the irregularities, the parallel vote was recognized by US Vice President Mike Pence, who said he spoke with Guaido Monday, “congratulat[ing] him on his reelection as Interim President of Venezuela.”

Meanwhile on Tuesday, Reuters reported that the Trump administration is mulling sanctions against opposition deputies which supported the change of leadership in the National Assembly.

“We go after those who undermine the constitution,” an anonymous high-ranking official told the wire service.

Washington has also indicated it is considering additional economic sanctions against Venezuela, but no further details have been made public.

Since 2017, the US has imposed round after round of unilateral measures targeting critical economic sectors, including finance, mining, and oil. Most recently in August, Trump signed an executive order prohibiting all dealings with Venezuelan state entities and authorizing secondary sanctions against third party actors.