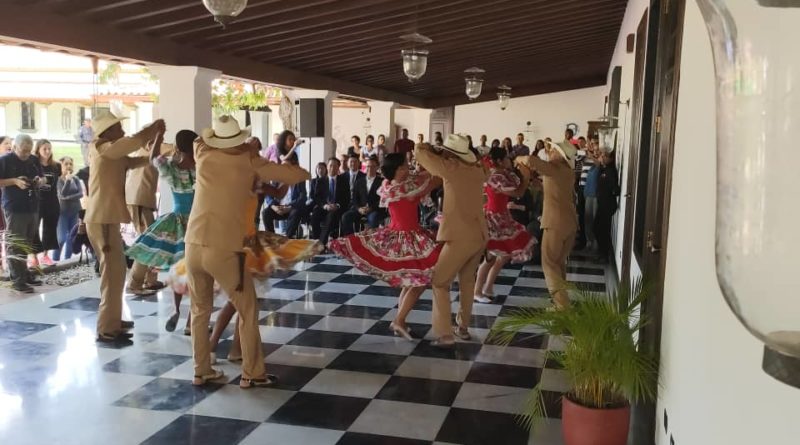 With a performance from the National Dance Company and a recital on a typical Chinese instrument by Professor Pingjin Lin, a Solidarity Activity was held this Thursday in “La Casona Cultural Aquiles Nazoa”, for the people of China in its fight against Coronavirus, an activity in which the Minister for Culture, Ernesto Villegas, was present, the ambassador of the People’s Republic of China in Venezuela, Li Barong, and the Venezuelan ambassador to the Asian nation, Ivan Serpa.

Minister Villegas expressed the duty that gladly ratifies friendship, brotherhood and unconditional support at all times to the people of China, especially with this contingency of health generated by the Coronavirus COVID-19.

He also rejected the xenophobic campaign against the people of China: “nothing is further from the Venezuelan people than xenophobia,” said the minister, who also said that Venezuela has been a country historically of opened doors to all the peoples of the world. “We feel practically twinned to each and every one of the nationalities that can be recognized in this world.” Xenophobia “is not part of our nature and nor of our culture,” he said.

RELATED CONTENT: China Defies US Pressure and Will Continue to Cooperate with Venezuela Villegas highlighted the humility of Venezuelans, who also rely on the development of the science of the People’s Republic of China and humanity to face the challenges of phenomena such as Coronavirus. “We trust science as a cultural heritage of humanity. The struggle of the Chinese people against the Coronavirus is the struggle of humanity. In the white coats of Chinese scientists, there is humanity as a whole.”

The role of China in the world
Villegas believes that it would be absurd to think that what is now called COVID-19 is only a problem of China, since on the contrary, it is a health problem that can afflict any country in the world.

He made special emphasis on the great affection and solidarity that Venezuela offers to the Chinese people, this aspect being one of the elements that they most need before all the commercial, political and psychological attacks to which they have been subjected. In the same way, he recognized the great cultural, scientific contribution and all levels of the world’s societies to which it has contributed for thousands of years. “China today has an important role to play in the world, and will have it tomorrow. So it is absurd, to engage in a childish way in a campaign against China, against the Chinese cultures. He denounced that said xenophobic campaign “takes root by impulse that is not spontaneous, but well directed, surely the work of a laboratory, to accompany the wars at the commercial and political level.”

He expressed his pride in Venezuela’s relationship with the Chinese people, highlighting that there are many foreign families that have made Venezuela their country, so he showed his confidence and faith in the future, especially to the children of China. “Chinese boys and girls are as innocent as those of Venezuela, the United States, Argentina, England, France, Germany, Africa and Australia.”

Villegas rejected the campaign against China, dimensioning the phenomenon that today faces this society and the world, concentrated in specific places that cannot serve as an excuse for discrimination and xenophobia.

On the other hand, the ambassador of the People’s Republic of China in Venezuela, Li Barong, expressed his deep gratitude to the Venezuelan government for its solidarity with the Chinese people in the battle of the epidemic caused by the new coronavirus. He explained that, before COVID-19, China has acted resolutely with thorough and rigorous measures, complying with global hygienic safety. He reported that the central group against the epidemic, led by Prime Minister Li Keqiang, taking full advantage of China’s institutional advantages, has implemented a national mechanism to establish a comprehensive system in prevention and control, with the aim of blocking the spread of viruses.

In an unprecedented battle, China isolated the mega city Wujan, which means a great sacrifice for the Chinese people. Barong added that patients receive treatment in isolation at hospitals, and people who have maintained close contact with them stay at home. To date, the government has sent 278 medical groups with 32,395 people to this province.

In addition, measures are taken with international travelers, reporting their health status to avoid infection abroad.

On the other hand, the Chinese government vigorously fulfills international obligations, assuming its due responsibilities in global health, so they have maintained close contacts and collaborations with world health organizations, actively responding to the concerns of different parties.